After beating Stefanos Tsitsipas in the final of French Open 2021, a gracious Novak Djokovic made a young fan the envy of the world 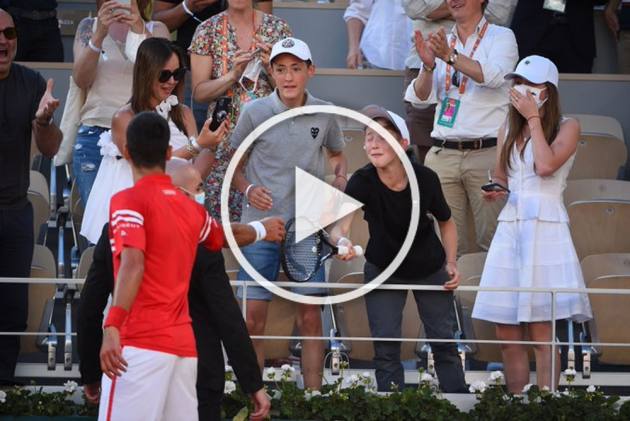 Moments after Novak Djokovic won his 2nd French Open and 19th Grand Slam singles title at Roland Garros on Sunday, the Serbian gifted his racket to a starry eye kid who there to witness one of the greatest ever tennis players in action with his guardians. (More Tennis News)

Video footage of the kid's reaction has since gone viral, so much so that Djokovic himself spent a good portion of his post-match media interaction talking about the unexpected turn of events.

"I don't know the boy, but he was in my ear the entire match basically. Especially when I was two sets to love down. He was encouraging," said the first man in Open Era to win all four Grand Slam tournaments at least twice.

I haven’t smiled this wide in a while!
Djokovic gifted his racquet to this young boy who kept encouraging him throughout the game âÂÂÂÂÂ¤ï¸ÂÂÂÂÂ pic.twitter.com/lQdCuJn2Jr

"He was coaching me, literally. And so, I thought, I found that very cute, very nice and so, you know, I felt like he was ... you know to gift the racket to... the best person was him. After the match, it was kinda my gratitude for him..." he added.

A gift to a great supporter ðÂÂÂÂÂÂÂÂÂÂÂÂÂÂÂ #RolandGarros | @DjokerNole pic.twitter.com/F04a5UDNQr

By the way, court-side coaching is illegal in tennis. In fact, Djokovic had his share of controversy when he was traveling with Boris Becker on the ATP tour. But the 34-year-old admitted that the boy was coaching him. Of course, the kid was not a part of Djokovic's entourage!

After spending more than four hours in his battle against 13-time champion at the Parisian clay, the world number struggled to match the first-time Major finalists Stefanos Tsitsipas' shot-making. Djokovic soon found himself 6-7 (6-8), 2-6.

But the fabled 'Djoker' fightback followed at Court Philipe-Chatrier as he won the next three sets 6-3, 6-2, 6-4. With that Djokovic closed in on his two great rivals Roger Federer and Nadal in the Slam count. When he enters the hallowed All England court later this month, the defending champion will have a very good chance of making it 20.

Or even make it a 'Golden Slam.'