Moise Kean, Federico Chiesa and Matthijs De Ligt, all scored a goal apiece as Juventus came back from 2-1 down to win 3-2. 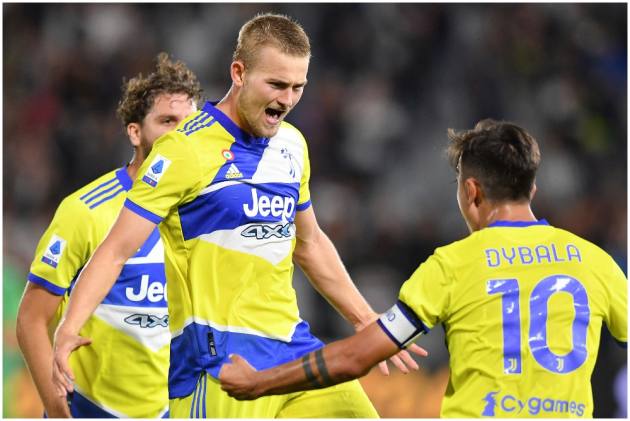 Critics had been demanding that Juventus use its younger players more during a horrendous start to Serie A, and they had to be appeased after Moise Kean, Federico Chiesa and Matthijs De Ligt each scored in a 3-2 win at Spezia for the Bianconeri’s first Serie A win of the season on Wednesday. (More Football News)

De Ligt scored the winner in the 72nd minute to complete a comeback after Juventus fell behind four minutes after the break. Playing in place of Juventus captain Giorgio Chiellini, the 22-year-old De Ligt coolly redirected in a loose ball that was being knocked around following a corner.

The 23-year-old Chiesa had equalized six minutes earlier with a typical goal for the Italy winger: he darted straight to the goal by dribbling through the legs of a defender then just barely got his shot off as he was sliding toward the ball.

The 21-year-old Kean — like coach Massimiliano Allegri in his second stint at Juventus — had given the visitors an early lead with a long shot after Adrien Rabiot knocked down a ball over the top from Leonardo Bonucci.

Spezia had struck back with goals both sides of halftime, the first coming with a solo effort from Emmanuel Gyasi, who dribbled by Danilo on the left flank and looped a long shot into the far corner. Gyasi celebrated like Cristiano Ronaldo, his idol and the recently departed Juventus player, by leaping into the air and pumping his arms down toward his body.

Janis Antiste, a 19-year-old French forward, put Spezia ahead by beating De Ligt on a counterattack with the help of his shot being deflected by Bonucci. Spezia nearly made it 3-1 but another effort minutes later was cleared off the line by Manuel Locatelli.
Juventus is eight points behind leaders Inter Milan and AC Milan.

Substitute Theo Hernandez set up one goal then scored himself to earn Milan a 2-0 win over promoted Venezia at the San Siro and extend the Rossoneri’s unbeaten start. Brahim Diaz scored Milan’s first goal by redirecting a volleyed cross from Hernandez with a volley of his own.

Then Hernandez pounded in an angled effort following strong work from Alexis Saelemaekers.

Mamadou Coulibaly equalized midway through the second half for Salernitana. Also, Empoli beat Cagliari 2-0 with goals from Federico Di Francesco and Leo Stulac.