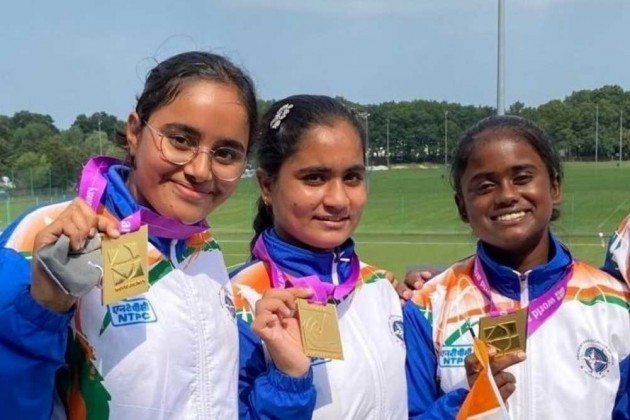 All finals of the recurve event will be staged on Sunday in which India archers will fight for 5 gold and 4 bronze medals.

In absence of Asian heavyweights Korea and China, the Indian archers ruled the roost in the under-18 (cadet) section, where the men's, women's and mixed pair teams emerged world champions.

Priya Gurjar, who had topped the qualification round and the team set for a world record, narrowly missed the individual gold, going down to Selene Rodriguez by three points (136-139) to settle for a silver.

Priya, Parneet Kaur and Ridhu Senthil Kumar had combined for 2067 to better the previous record by 22 points.

Overall, Priya returned with two gold medals (team and mixed) and an individual silver to become the first Indian compound archer to win three medals at any Youth World Championships.

Earlier the women's team Priya, Parneet and Ridhi Varshini, who had shattered a four-year-old record in the rankings round, put up a splendid show to defeat their rivals from Turkey 228-216 en route to the gold medal.

The Indian trio won the first end narrowly (58-57) and extended their lead by two points by shooting 59 out of 60 in the second end.

In the third end, the Indians shot five perfect 10s for a three-point advantage that proved decisive as the USA trio of Sawyer Sullivan, Isaac Sullivan and Nathan Zimmerman failed to overcome the deficit despite winning the fourth end (59-58).

The top-seeded mixed pair of Priya and Dalal then made a clean sweep in the cadet team events, defeating third seed USA 155-152 en route to bagging a third gold.

Later in the evening session, India's Sakshi Chaudhary lost to Amanda Mlinaric of Croatia narrowly 140-141 in a close five-setter and had to be content for a silver in the junior woman individual section.

The rivals was locked 84-all after three ends, but the Croat nosed ahead by two points shooting two 10s in the penultimate end.

Sakshi won the fifth end 29-28 with two 10s but it was not enough as Amanda became the cadet junior world champion, winning the match by just one point.

Rishabh Yadav, who was seeded 12th, clinched a second bronze medal for India in the compound section, when he stunned third seed Sabastian Garcia 146-145 in the third place match of junior individual section.

India are also in line for five more gold and two bronze medals in the recurve section on Sunday.

India's previous best show in the Youth World Championships was in the last edition at Madrid 2019 where they had bagged two gold and one bronze medal. (with inputs from Agencies)