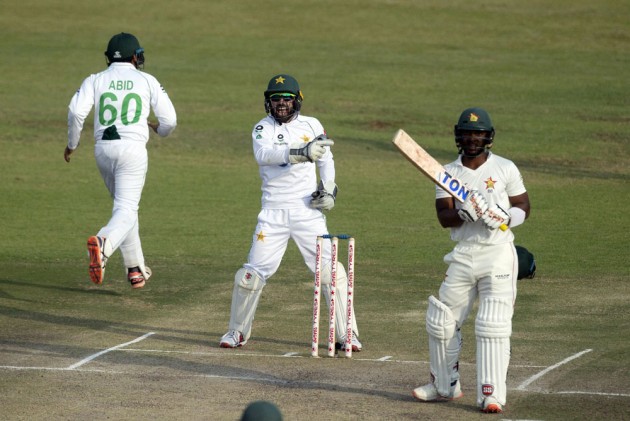 Pakistan are on the brink of a 2-0 series win against Zimbabwe after the hosts finished day three of the second Test on 220-9.

After the tourists declared at 510-8, Zimbabwe were forced into the follow-on thanks to a career-best five-for from Hasan Ali (5-27).

Zimbabwe managed only 15 runs in 13 overs at one stage of the opening hour as any thoughts of a chase seemed to dissipate.

They did at least offer sterner resistance over the subsequent 30 overs, reaching 132 before being sent in to bat again.

However, Zimbabwe began to get a grip on proceedings through an admirable stand from Regis Chakabva (80) and captain Brendan Taylor (49).

Taylor in particular seemed to enter short-form mode, swinging for 10 fours from just 31 balls before being removed at 142-3 as Rizwan and Shaheen combined again.

Chakabva was taken at slip by a good catch from Babar Azam, and suddenly the win was in Pakistan's sights, Milton Shumba caught for 16 before consecutive balls from Nauman accounted for Donald Tiripano and Roy Kaia as he reached 300 first-class wickets.

Shaheen bowled Tendai Chisoro for eight and Richard Ngarava for a duck but Luke Jongwe (31 not out) dug deep to keep the contest alive.

As the shadows lengthened in Harare, Pakistan switched to the spin attack but could not find the breakthrough and must return on Monday to finish the job.

Hasan has enjoyed spectacular form since returning to Test cricket this year and made it 24 wickets in five innings as he dismantled the Zimbabwe middle order in the early session.

Although he could not add to his tally as Nauman led the charge in the second innings, this was still a Test to remember.

After a first-innings knock of just nine, Taylor opted to attack the bowlers when he came out again, swinging for the boundary with abandon.

His 49 from just 31 balls was an entertaining ray of light for a home side for whom this contest has looked over for some time.