Zinedine Zidane Is The Captain Of Our Ship: Real Madrid Skipper Sergio Ramos 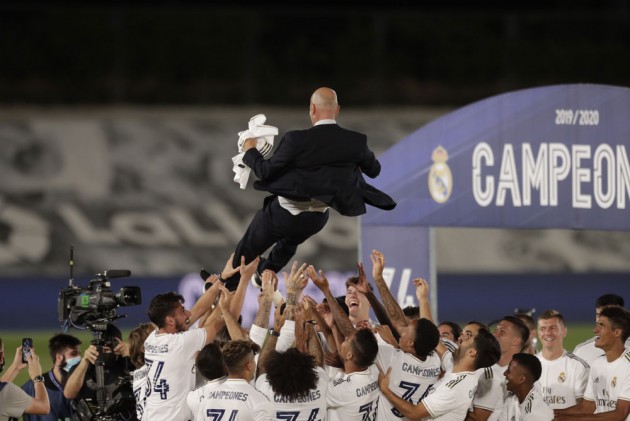 Los Blancos overcame Villarreal 2-1 at the Estadio Alfredo Di Stefano to win Spain's top flight for a 34th time – Barcelona's defeat by the same score at home to Osasuna opening up an insurmountable seven-point gap with a game to go.

Madrid were a distant third in the 2018-19 campaign, with Zidane returning for a spell in charge in the Spanish capital during that term in March last year.

Captain Ramos believes club legend Zidane, who won a LaLiga title and three straight Champions League medals during his first stint as boss, was the influential factor in the team's success.

"Zidane has been key, he's the captain of the ship, he led us right from the start of the season," Ramos said during LaLiga's coverage of the game.

"He put a lot of faith in all of these players and we've always felt protected with Zizou, he believed in us. Let's hope that it's valued properly. He's a unique coach."

Madrid have won 10 straight games since the resumption of the league after its suspension due to the coronavirus pandemic.

Ramos feels Madrid's title triumph will be remembered for their consistency of results.

"Well it's the league of the hard work, the league of consistency, the coronavirus league we have to think of it in those terms," he added.

"It's been a strange season but our objective was very clear once the league restarted we wanted to win every game.

"There were no doubts in our minds and we've shown that on the pitch, it's difficult to win every game, you can't win these games easily, every rival is difficult but this is the reward for our hard work, 34 leagues [for the club] and I'm very happy with my fifth title."

Ramos is into the final year of his contract at Madrid and the Spain legend reiterated his desire to see out his career at the club.

"It depends on what the president wants, I'd like to finish my career here," Ramos said.

"I'm very relaxed, I'm sure there won't be any problem and I hope I can retire here."

Madrid were coasting through Karim Benzema's double until a late Vicente Iborra header ensured a nervy ending, during which Thibaut Courtois made a fine double save.

"We had a scare in the Granada game, it was the same tonight, they scored and came back into the game a little bit," Madrid's goalkeeper said.

"They pushed us right to the end and I had to make a double save."

Courtois too hailed Zidane's impact, adding: "Zidane has been very important, he made the plan, the plan we followed.