Sirisena dissolved Parliament on October 9 and announced snap polls on January 5 next year after it became evident that he did not have enough support in the House to prove the premiership. 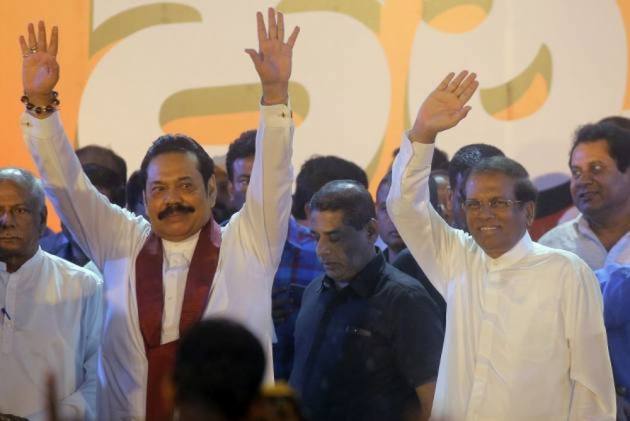 Sri Lanka's major political parties and an election commission on Monday challenged President Maithripala Sirisena in the Supreme Court over his controversial move of dissolving Parliament 20 months before its term was to end.

Sirisena dissolved Parliament on October 9 and announced snap polls on January 5 next year after it became evident that he did not have enough support in the House to prove the premiership of 72-year-old Mahinda Rajapaksa, whom he has appointed prime minister after abruptly sacking Ranil Wickremesinghe on October 26.

Ousted premier Wickremesinghe's United National Party (UNP), the main opposition Tamil National Alliance (TNA) and the leftist JVP or the People's Liberation Front (PLF) were among the 10 groups that filed petitions in the apex court, seeking a declaration of the president's action as illegal, officials said.

Sirisena on Sunday stoutly defended his move to dissolve Parliament, saying it was taken to prevent clashes among rival lawmakers. The president said there were media reports that politicians would clash during the floor test, which was due on November 14.

In a televised address to the nation, the President said he heard stories from lawmakers on both sides of possible violence in Parliament that could even result in deaths and clashes spreading around the country.

"It appeared to me that, if I allowed the Parliament to be convened on the 14th, without dissolving it, it could have brought about commotion and fights in every city and every village would lead to very unpleasant and difficult situation for the average citizens of my beloved country," he said.

"As such, the best solution was not to allow those 225 members in the Parliament to fight each other and allow that to develop into a street fight in every part of the country.

"It is my duty and the responsibility to ... create the situation for the 15 million voters in this country takes the ultimate decision by choosing their members to the Parliament through a free and fair election," Sirisena added.

"The CPA categorically opposes this move as it is unconstitutional and ultra vires," the think tank said in a statement.

Rauff Hakeem, a leader of the Sri Lanka Muslim Congress, which also filed a petition, said, "Filed action in the Supreme Court today challenging the purported dissolution of parliament as untenable as per the 19th amendment of the Constitution."

The 19th Amendment to the Lankan Constitution restricts powers of the president to dissolve Parliament before the expiry of four-and-a-half years of a total five-year term.

Therefore, constitutionally a fresh election could not happen before February 2020 as the current Parliament's term was to expire in August 2020.

Rajapaksa, who ruled Lanka for a decade from 2005, was unexpectedly defeated by his deputy, Sirisena, in the presidential election held in January 2015 with the support from Wickremesinghe's UNP.

The 72-year-old strongman was unexpectedly defeated by his deputy, Sirisena in the presidential election held in January 2015 with the support from Wickremesinghe's United National Party (UNP).

However, the power-sharing arrangement between Sirisena and Wickremesinghe became increasingly tenuous on several policy matters, especially on issues like the economy and security. And subsequently, Sirisena abruptly ousted Wickremesinghe and replaced him with Rajapaksa.

The island nation plunged into a constitutional crisis following the move.

The Lankan President also suspended parliament till November 16 after Wickremesinghe sought an emergency session of the House to prove his majority.

The overnight move triggered a constitutional crisis in the country and has created political uncertainty in the island nation which is being observed keenly by its neighbours as well as major global powers.