Together with rookie Ramesh Mendis, Dickwella added 87 runs so far for the seventh wicket as Sri Lanka edged closer to the 500 mark. 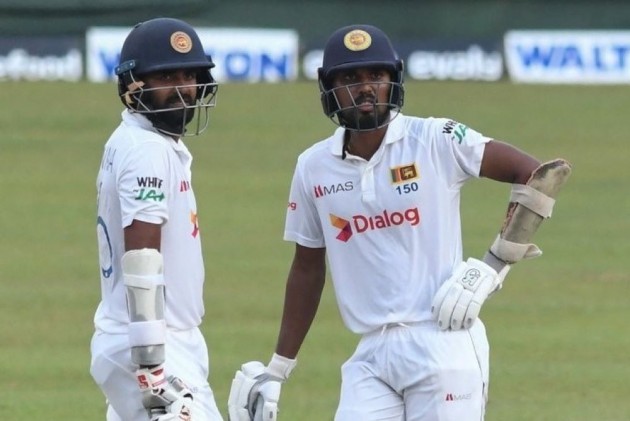 Wicketkeeper-batsman Niroshan Dickwella hit a run-a-ball 64 not out in the second Test to help Sri Lanka reach 469-6 at stumps on the second day against Bangladesh in Pallekele on Friday. Highlights | News

Sri Lanka had lost two wickets in successive overs with its first-innings score on 382 but Dickwella's knock wrestled back the initiative.

Dickwella, an aggressive left-handed batter, displayed unconventional strokes and Bangladesh captain Mominul Haque was running out of ideas to contain him.

The 27-year-old Dickwella was particularly harsh on the spinners. He swept the first ball he faced — from Mehidy Hasan — to the square leg boundary and continued to relish playing sweep and slog-sweep shots along with some elegant drives.

Dickwella's adventures continued against pace as well as he frequently played the ramp shot to the vacant third man boundary, much to the frustration of the opposition.

Soon after tea, Dickwella was given out leg before wicket to Taijul Islam when on 32 but he successfully reviewed the decision and reached his 18th half-century in just 48 balls.

Together with rookie Ramesh Mendis, Dickwella added 87 runs so far for the seventh wicket as Sri Lanka edged closer to the 500 mark.

Dickwella is chasing his first test hundred, having been dismissed twice this year in the 90s. Mendis, who was dropped on 12 at second slip, was 22 not out as play was called off early due to bad light.

Oshada Fernando steadied the Sri Lankan innings in the morning session, adding 104 runs for the second wicket with Lahiru Thirimanne (140).

Fernando was dismissed when wicketkeeper Liton Das moved across and completed the catch after the ball hit the pad and deflected off the back of Fernando's bat. His 81 came off 221 balls with eight boundaries.

"It is very important to convert your fifties into hundreds," said Fernando.
"I think by tomorrow or the day after tomorrow, there will be some turn on this surface."

Sri Lanka is in the best position with the wicket offering much more turn and bounce for the spinners than the drawn first Test.

Only 65.5 overs were possible on Friday and 98 overs are scheduled to be bowled on Saturday to catch up for lost time.

"Not every ball is turning so it is tough to know how the wicket will behave later in the game," Taijul said.

"I am hoping that it won't be too bad. We need to bat well on this wicket."