Eenam, who made headlines with her "Pakistan-Terroristan" remark at the UN earlier this year, was in Delhi for vacation. 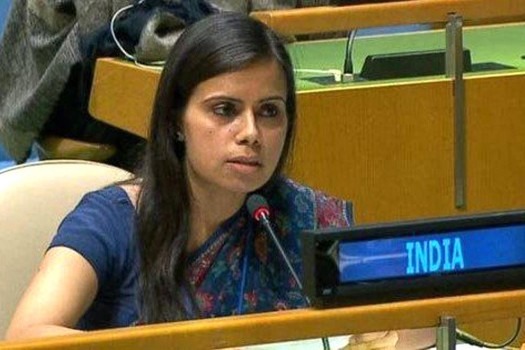 Indian star-diplomat Eenam Gambhir, who made headlines with her "Pakistan-Terroristan" remark at the UN earlier this year, became a victim of phone-snatching in her hometown Delhi.

On Dcember 23, when Gambhir was out for a post dinner walk in Rohini, two men on bike snatched her phone on the pretext of asking for direction. A case has been registered in the matter, reported news agency ANI.

The 34-year-old Indian Foreign Service officer is India's First Secretary in the Permanent Mission of India to the UN. Posted in New York, Gambhir is home for a vacation.

Based on the diplomat's statement, a case under Sections 356 (Assault or criminal force in attempt to commit theft of property carried by a person) , 379 (Punishment for theft) and 34 (Acts done by several persons in furtherance of common intention) was registered at the Rohini North police station against two unidentified men. Till Sunday evening, the police had not identified the snatchers, added the report.

Delhi is long grappling with the menace of snatching. The year 2015 witnessed  9,896 cases of snatching according to the Delhi Police. In  2016 (up to 15th November), 8,425 cases of snatching have been registered which is minutely lesser than the cases registered last year during the same period i.e. 8,599 cases, revealed data.