He said that a new, robust, sustainable and people-friendly financial architecture is taking shape in the State. 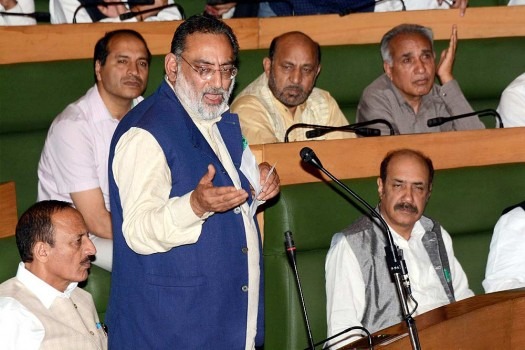 The Minister of Finance, Haseeb Drabu, today presented his 4th Budget in the Jammu and Kashmir State Assembly. He termed it a major step towards making Jammu and Kashmir a truly welfare state. “It will be a potential game-changer budget full of welfare initiatives,” he said.

“The Budget is a culmination of sustained work in building new systems for public expenditure management over the last three years. We have made concerted and coordinated efforts to overhaul the style and substance of financial management of the state with macroeconomic stabilisation complemented by structural reforms and followed by systemic changes. They have now set the stage for meaningful public policy interventions,” Drabu said while presenting Rs 80000 crore Budget for the fiscal 2018-19 in the House.

The Finance Minister said J&K is the first state in the country that is presenting the budget in the first half of the last quarter of the current fiscal while the central budget is taking place a month later. “We were the first state to move from the archaic Plan-Non Plan Expenditure to Capital and Revenue Expenditure which was followed by other states. All the systematic changes been made so far have started paying off,” he said and added that a new, robust, sustainable and people-friendly financial architecture is taking shape in the State.

The Minister said that it is perhaps for the first time in the budgetary history of J&K that the revised estimates for the current year are much better than the budget estimates presented last year. “Revenue Estimates envisaged to be Rs 9931 crore, have been exceeded and in the process, we have crossed the Rs 10,000 crore mark of own tax collection,” he said.

The Finance Minister said the State was facing an unfunded resource gap of over Rs 3,000 crore. “As the year comes to an end, I have a surplus of more than Rs 1300 crore. The fiscal deficit which is regarded to be the single most important indicator of fiscal performance, was estimated at around 9.5 per cent but has actually turned out to be around 5.7 per cent; an improvement of nearly 400 basis points. This is unprecedented,” he said and added it indicates that systems, which were in a state of disarray, have started stabilizing and functioning in a better way now.

“Because of a well-run financial set up, we are able to take decisions that change lives of the people for good, especially of the most vulnerable and marginalised. We hiked the minimum wages of the working class substantially and a new category of highly skilled worker was introduced and Rs 400 was fixed as the minimum wage,” the Finance Minister said.

Drabu said the State Government under the leadership of Chief Minister Mehbooba Mufti have woven a social security net around the poorest of the poor, insured their lives, protected them against disability, disease and death, provided for their children’s education and given them access to small credit. “I am sure this will make life simpler and more secure for 3 lakh families; that is 15 lakh people,” he said.

To revive the traditional handicrafts industry of Kashmir, Drabu said the government is setting aside Rs 5 crore each to the Handicraft Development and Handloom Development Corporations for raw material and inventory upgradation. “This will set them on a path of recovery and from there we will clean their balance sheets and restructure their business operations as is underway in the case of J&K HPMC,” he said.

In a major relief for the state employees and pensioners, Dr Drabu said the government will set up a corpus fund of Rs 12,000 crore, which will be used for making timely GPF payments to the Government employees in future. “To express my gratitude to all the employees of the state Government, I am announcing release of 1 per cent Dearness Allowance due to the employees from 1st July, 2017.  Our Government is already committed to the implementation of 7th Pay Commission Recommendations from April 1, 2018, which will be effective from 1st January, 2016,” he said, adding that the various anomalies in different departments will be addressed during the course of implementation of 7th Pay Revision.

The Finance Minister said the last few years have been very damaging for business in general. “Be it tourism, manufacturing, or household enterprises, all are in one kind of a distress or the other. First the localised factors; floods of 2014, and then the disturbances of 2016, then came the policy shock of demonetisation which was followed by a major tax regime change, the Goods and Services Tax. The short term disruptive influence has been more pronounced on the SMEs all around the country, more so in J&K,” he said.

“Considering the importance of industries for employment generation, I also propose an incentive for SMEs and industrial units to get them listed at SME Exchange and other Stock Exchanges in the country to raise capital through IPOs or other market tools.  I make an initial budgetary provision of Rs. 1.00 crore and will provide additional money, if required,” he said.

To mitigate the losses suffered during the floods of 2014 and the situation in 2016, Dr Drabu said the RBI approved a loan restructuring package for borrowers in the state. “In deference to our Chief Minister, I have decided to rollout a "CM's Business Interest Relief Scheme". For all the RBI approved restructured accounts, the Government will contribute one third of the total interest payment of all these borrowers. In other words, one third of the monthly instalment will be paid by the state Government and two thirds will be paid by the borrowers,” he said and added that it is a conscientious and caring budget reaching out to every section of the society.