The 182 metre statue of Sardar Vallabhbhai Patel, will be dedicated to the nation on his birth anniversary. 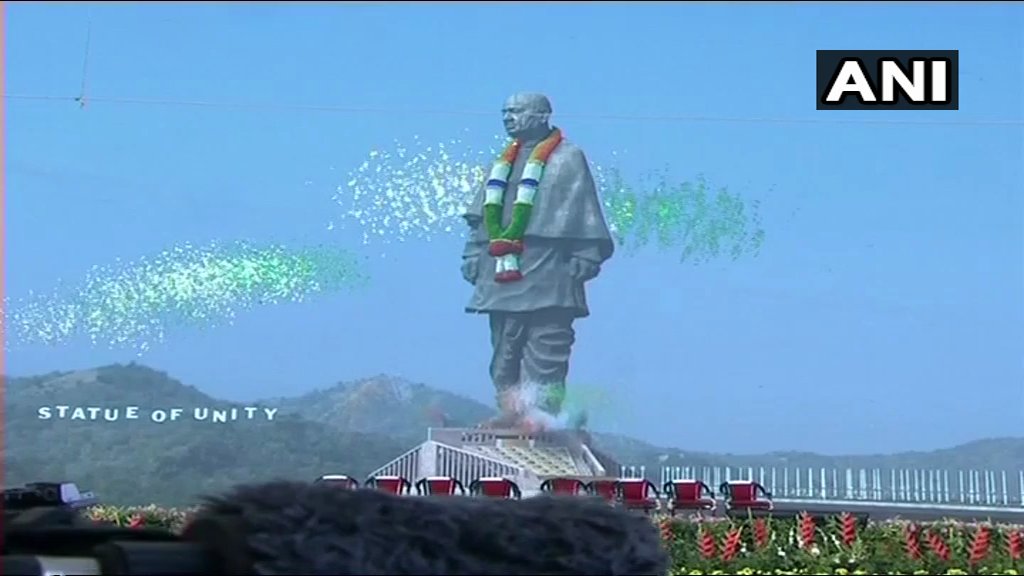 Prime Minister Narendra Modi on Wednesday unveiled the 182-metre high 'Statue of Unity' in honour of country's first Home Minister Sardar Vallabhbhai Patel, and dedicated it to the nation.

Built on Sadhu Bet Island on Narmada river, the imposing statue is touted to be the world's tallest.

It is almost 29 metres taller than China's Spring Temple Buddha that stands at 153 metres, and almost twice as high as the 93-metre Statue of Liberty in New York.

Three Indian Air Force planes flew past the Patel figure and created the tricolour in the sky after Modi inaugurated the giant.

A viewing gallery at a height of 153 metres has been created inside the statue to enable tourists to have a view of 1,210 metre long concrete Sardar Sarovar Dam, 3.2 km upstream as well as the nearby Satpura and Vindhya mountain ranges.

ALSO READ: All You Need To Know About The World's Tallest Statue In Gujarat

Here are the LIVE UPDATES:

11:15 AM: If it was not for Sardar Sahab's resolve, then we Indians would have to take visa to see the Gir lions, pray at Somnath, or to see Hyderabad's Charminar: PM Modi.

10:45 am: Events like today are very very important in a country's history and such events are difficult to erase. It is a historic and inspiring occasion for all Indians. I am fortunate to dedicate this statue of Sardar Sahab to the nation: PM Modi.

10:24 am: PM Narendra Modi arrives for the inauguration of Sardar Vallabhbhai Patel's 'Statue Of Unity'.

9 AM: Celebration underway ahead of the inauguration of the world's tallest statue in Gujarat

08:45 am: Post our freedom movement, Sardar Patel worked hard to get more than 550 princely states together to make India one. It's only right that we remember him today: Defence Minister Nirmala Sitharaman.

08: 10 am: Sardar Vallabhbhai Patel's statue which is the tallest in the world should have been made years ago. India has today paid tribute to a man who built India: Sports Minister Rajyavardhan Singh Rathore.

07:19 am: We bow to the great Sardar Patel, the stalwart who unified India and served the nation tirelessly, on his Jayanti: PM Modi.

The “Statue of Unity” is a symbol of both the unity of hearts and the geographical integrity of our motherland. It is a reminder that divided, we may not be even able to face ourselves. United, we can face the world and scale new heights of growth and glory: PM Modi

7 am: PM Modi arrived in Ahmedabad on Tuesday night ahead of the unveiling of the 'Statue of Unity' in Gujarat's Narmada district on the birth anniversary of Sardar Vallabhbhai Patel.