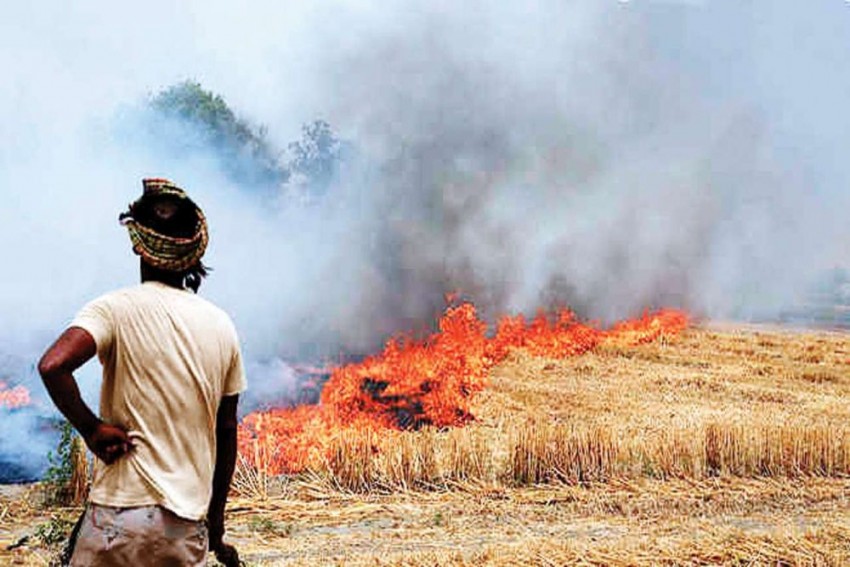 Soon rice harvesting will be in full swing across Punjab, Haryana, and parts of Rajasthan. There is a window of around a month before wheat sowing has to be done. This is the time when farmers not able to employ extra labour or spend extra on clearing rice straw or stubble in the fields opt to burn it, leading to high levels of air pollution in the region. It is a time when people suffer the most due to respiratory ailments.

Over the last five years efforts have been stepped up both by the central and state governments, and also the private sector, to wean farmers away from the practice of burning the stubble. Farmers are being taught how to use agro-waste, which in the case of rice accounts for around 70 percent of the crop, for enriching the soil or sell it to bio-fuel and power plants being set mostly in Punjab. In 2017–18, it is estimated that out of 586 million tonnes crop residue in the country, 116 million tonnes were burnt, leading to high levels of air pollution and greenhouse gas emission.

Dr K. Annapurna of Indian Agricultural Research Institute (IARI), states that burning of one tonne of paddy straw accounts for loss of 5.5 kg Nitrogen, 2.3 kg phosphorus, 15 kg potassium and 1.2 kg sulphur besides, organic carbon. “Crop residue burning is a potential source of Green House Gases (GHGs) and other chemically and radioactive important trace gases and aerosols. Hence the recycling of these wastes is an ecological necessity,” said Annapurna.

According to Sandeepa Kanitkar, MD and Chairperson, Kan Biosys Pvt. Ltd, who has been working with farmers in half a dozen states including Punjab and Haryana, narrates how in 2017 they had started trial work on alternatives to stubble burning initially in the farmer's field. Later validation of those trials was done at the Punjab Agricultural University (PAU) and the Haryana Agricultural University (HAU) for three seasons. “We noticed that farmers definitely got good results with respect to sequestrations of carbon inside the soil. Once you sequester the carbon, the fertilizers use efficiency increases, water management improves, and efficiency of pesticides increases because of microbial diversity. So, there are multifarious benefits,” says Kanitkar.

Those benefits are however challenged by the farmers as they need to spend around Rs 2,000 extra per hectare including cost of one bag of urea, use the rotavator machine to cut the straw, spread it on the ground and then flood the field with water and utilise speed composters urea as per the procedure. And within 15 days, the straws loosen out so that the normal operations of tillage for wheat sowing and germination can happen. All this can take 15 days. Overcoming farmer biases, Kan Biosys team has so far been able to use its procedure on around 30,000 acres of land owned by 15,000 to 20,000 farmers.

The Microbiology Division of ICAR-IARI has also developed an effective microbial solution – Pusa Decomposer (both in liquid and capsule form) – for accelerated paddy straw decomposition which makes the field ready for wheat sowing in 25 days. Four capsules of this product can be scaled up to 25L liquid formulation which can be applied in-situ to 1.0 ha of rice field having 5-6 tonnes of paddy straw. For in-situ management, harvesting paddy with combine followed by chopper plus mulcher and spraying Pusa Decomposer followed by rotavator and light irrigation to keep the field moist has shown accelerated decomposition of the paddy straw and enabled the farmer to do timely wheat sowing. This has been demonstrated in Punjab, Haryana, UP and NCR Delhi.

Field experience has shown that stubble and straw can be decomposed within 15-20 days as against earlier processes that took 50-60 days. What is more important is that the wheat crop sown next benefitted, as the yield increase was 8-10%.

The pace in the industrial utilisation of agro-waste has picked up after 2018 when the Biofuel Policy came into effect. The policy envisages utilisation of agro-mass for production of energy including power generation and second generation ethanol from rice straw, while at the same time ensuring reduction of the GHG emission, says Atul Mulay, president bio-energy, Praj Industries Ltd, a listed company. Bio energy constitutes over 70 percent of the Praj’s global operation. The bio energy process solutions provider, which is associated with 750 distilleries across over 70 countries, is in the process of helping several companies including Indian Oil Corporation to set up biofuel plants.

At Indian Oil’s Panipat Refinery, Praj Industries is helping to set up a 1 lakh litre per day capacity second generation ethanol plant. Apart from producing biofuel, the plant will also be using the rice straw for cogeneration (steam and power generation) for powering the boilers. The project, which has been delayed due to Covid, is in the advanced stages and expected to be operational next year.

In 2019, the central government came out with a comprehensive biogas scheme which has helped to promote technologies developed for converting rice straw into biogas and further into compressed biogas, after taking out methane and sulphur. Compressed biogas is an equivalent of CNG, though with a better calorific value which makes a difference in operations giving more mileage per turn per kg or per litre whatever the measure.

Now, instead of three-point operations – manufacturing points, the distribution points and consumption points of CNG – decentralised models of small complex biogas plants are being proposed at different locations where raw material is readily available. “This will help to spread the reach of compressed biogas to rural areas for vehicular use including tractors, once the modified models become available,” says Mulay.

Under the ‘Pradhan Mantri JI-VAN (Jaiv Indhan- Vatavaran Anukool fasal awashesh Nivaran) Yojana’, financial support to twelve Integrated Bio-ethanol Projects using lignocellulosic biomass and other renewable feedstock with total financial outlay of Rs 1969.50 crore for the period 2018-19 to 2023-24 is coming up. Oil PSUs are undertaking several 2G ethanol bio-refineries projects in various parts of the country. To make these and other projects viable, various models to collect bio-waste including rice straws from farmers are being mulled including engaging aggregators to collect it from the farmers for delivery to the plants.

The farmers are however keen on getting some kind of incentive despite having seen evidence of how agro waste can help in enriching the soil and improving the yield and also help them earn through sale of waste to biofuel plants.

“If the farmers are not incentivised, as they are in the Western countries, how they practice regenerative farming?” says Kanitkar.

In the West, farmers are reported to be getting $20 to $25 per acre as incentive for putting the carbon back in the soil. Given that soil is the best thing for carbon absorption, if well utilized, this practice and stopping of stubble burning in Punjab and Haryana could help us reduce at least around 1 million tons of carbon emission right now.

The carbon sequestering has to be done for all crops and not just rice. Several green technology promoters are trying to explore whether a carbon exchange fund can be set up. With the help of NGOs, they are studying whether a tie-up between farmers and the corporate houses can be worked out to use the opportunity to trade for carbon credits. The government is yet to responded to these demands even as we face another year of stubble burning pollution.