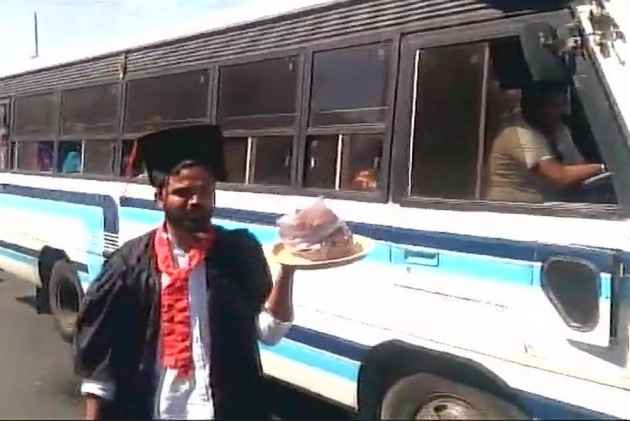 A group of college students, donning degree robes and selling 'pakodas' to passers-by in a dig at Prime Minister Narendra Modi's remarks over job creation, were today whisked away by the police, hours before the PM's rally here.

The students appeared near the Mehkri Circle, a few metres away from Palace Ground where Modi is scheduled to address the rally, in protest against his recent remarks linking pakoda (snack) selling and job creation.

On being asked about inadequate job creation in the last four years in a recent interview to a news channel, the prime minister had said that a person selling pakodas outside their (channel's) television studio and earning Rs 200 a day should also be perceived as 'employed'.

The young students sold 'Modi Pakodas', 'Amit Shah Pakoda' and 'Dr Yeddy Pakodas', a reference to Karnataka BJP chief Yeddyurappa, to those passing by, including the BJP workers and visitors on their way to the rally.

The police later removed the degree robes of the protesting students and took them into custody.