The date of registration of the vehicle would also be printed on these stickers, the ministry told the court. 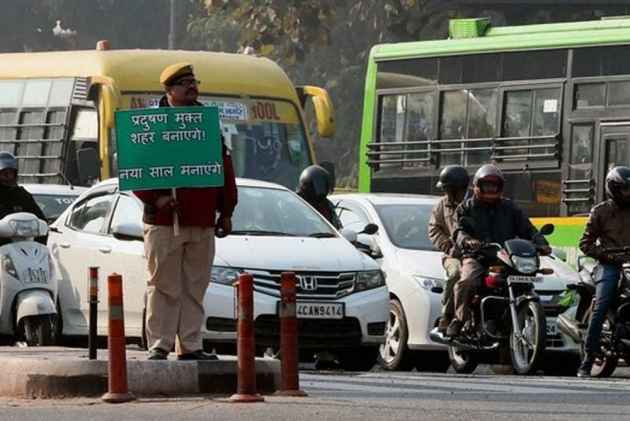 Vehicles plying in Delhi-NCR would soon have hologram- based colour coded stickers of different colours indicating the nature of fuel they are using.

The Supreme Court on Monday accepted this proposal of the ministry of road transport and highways (MoRTH), which told the top court that hologram-based light blue colour sticker would be used in vehicles using petrol and CNG fuel, while an orange sticker would be put on diesel-run vehicles.

The date of registration of the vehicle would also be printed on these stickers, the ministry told the court.

A bench of Justices Madan B Lokur, S Abdul Nazeer and Deepak Gupta accepted the suggestions of the ministry and asked it to implement the colour-coded sticker system in the vehicles plying in the Delhi-National Capital Region by September 30.

Advocate Aparajita Singh, assisting the apex court as an amicus curiae in the air pollution matter, referred to the affidavit filed by MoRTH and told the bench that the ministry has agreed to the suggestions in this regard.

The amicus said the MoRTH should start the process of having the colour-coded stickers on vehicles since the pollution levels go up during the winter, which is approaching.

Singh said though the ministry wanted the colour-coded system to be applicable across the country, they should implement it in Delhi-NCR soon.

"My only request is that it should be done within two months so that in October-November, when we are in an emergency situation due to pollution, it can be used," the amicus said.

Meanwhile, the counsel appearing for Toyota Kirloskar Motor Pvt Ltd told the bench that they were selling hybrid vehicles which caused very negligible pollution and there was no distinction for these kind of vehicles in the colour-coded system.

To this, the bench told Nadkarni, "This is okay for the time being. But the things will improve. Toyota has hybrid vehicles, and we hopefully will have electric vehicles also. What about these vehicles?."

The ASG told the bench that electric vehicles would have green number plates.

The bench, while suggesting that there could be incentives for those manufacturing electric or hybrid vehicles, observed "why cannot you do it now?"

An advocate, appearing for Society of Indian Automobile Manufacturers (SIAM), said that now a final notification for electric vehicles has come saying these would have green number plates.

The ASG told the court that he would get back to the court on this issue.

The bench asked the ministry to consider having green number plates or green stickers for electric and hybrid vehicles and take a decision in this regard within two weeks.

In its affidavit, the MoRTH told the apex court that it supported the proposal of the amicus regarding the colour-coded stickers which could be used to identify vehicles and restrict those using dirtier fuel during "poor category" pollution days.

It has said that MoRTH had issued a draft notification on May 15 proposing a number plate with green background for electric vehicles and thus, the requirement of putting up of stickers would not be required in case of such vehicles.

"In light of the suggestions of the amicus curiae, it is proposed that the colour coding for the third registration plate in the form of 'self destructive type' stickers would be incorporated in the proposed amendment of the 'The Motor Vehicles (New High Security Registration Plates) Order, 2001' and further that the 'date of registration' would also be printed in the sticker," the affidavit said.

The amicus had earlier told the court that colour-coded stickers, as used in Paris, would help in tackling air pollution which would be more effective than having "odd-even" vehicle rotation scheme in Delhi.

The issue of colour coded stickers for vehicles had cropped up when the apex court was hearing a matter relating to air pollution in Delhi-NCR.