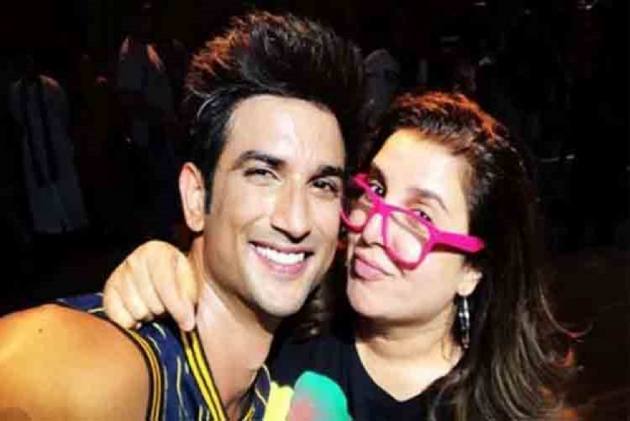 Choreographer-filmmaker Farah Khan, who has shot her first song with Sushant Singh Rajput, has called the actor a "one shot wonder". He also expressed his happiness on getting this chance to work with one of the best choreographers the industry has today. Farah Khan on the other hand called him an actor who requires only one shot for his dancing skills.

Farah was shooting a song for the Bollywood remake of "The Fault In Our Stars", which has been titled "Kizie Aur Manny", directed by Mukesh Chhabra. This will mark the popular casting director's maiden foray behind the camera.

"The one shot wonder Sushant Singh Rajput and I shooting our first song for Mukesh Chhabra's 'Kizie Aur Manny'," Farah wrote alongside a photograph oh herself with Sushant.

The "Raabta" actor tweeted thar he his honoured to work with Farah for the first time in a movie.

"I am honoured and how, my first with Farah Khan in a film, and finally as an actor. Thank you so much maam, today is such a special day," he added.

Sushant plays the title role with debutante Sanjana Sanghi in the movie. The film is presented by Fox Star Studios.

The Hollywood movie "The Fault in Our Stars" was directed by Josh Boone. It received worldwide recognition with strong critical and commercial success for its portrayal of a sensitive and unique love story that blossoms between the two lead characters.

Actors Shailene Woodley and Ansel Elgort played the leads in the film which traces the life of a young girl suffering from cancer, who subsequently meets a boy at a support group and falls in love with him.

Josh Green, the author of the book "The Fault in Our Stars", had earlier said he found it amazing that his piece of work was being made into a film in India.