Sushma Swaraj also met Estonia's Foreign Minister of Sven Mikser and had a good exchange of views on intensifying cooperation in IT, trade and investment, culture, education, tourism and multilateral fora. 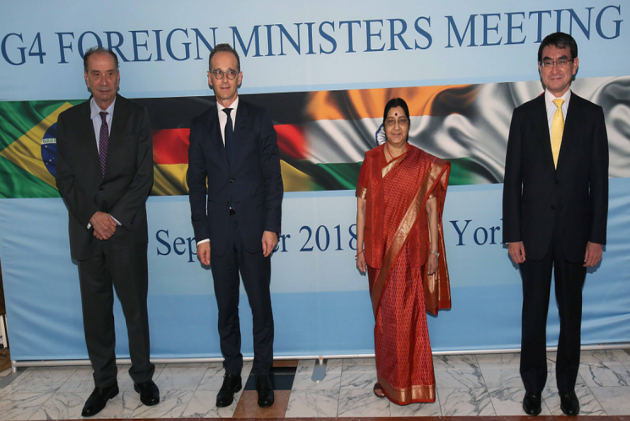 After the meeting, External Affairs Ministry Spokesperson Raveesh Kumar said they were "building upon a historical relationship with an important Pacific partner of India".

Demonstrating our determination for a common cause.

EAM @SushmaSwaraj hosted the G-4 Foreign Ministers Meeting of Japan, Germany and Brazil to discuss progress on early reform of the Council, including the expansion of both permanent and non-permanent categories of membership. pic.twitter.com/1BHXx5W7lr

The Indian Defence Ministry said at that time Kubuabola and Arun Jaitley, who was holding the defence portfolio then, "discussed expanded defence partnership in maritime security between both the countries and naval cooperation was identified as an area of promise."

She also met Estonia's Foreign Minister of Sven Mikser and "had a good exchange of views on intensifying cooperation in IT, trade and investment, culture, education, tourism and multilateral fora," he tweeted.

Sushma Swaraj will be speaking at the High-Level Meeting on Climate Change convened by Secretary-General Ban Ki-moon and at a meeting of the Non-Aligned Movement Ministerial Committee on Palestine.