The reality behind the Modi government's big bang achievements since May, 2014. 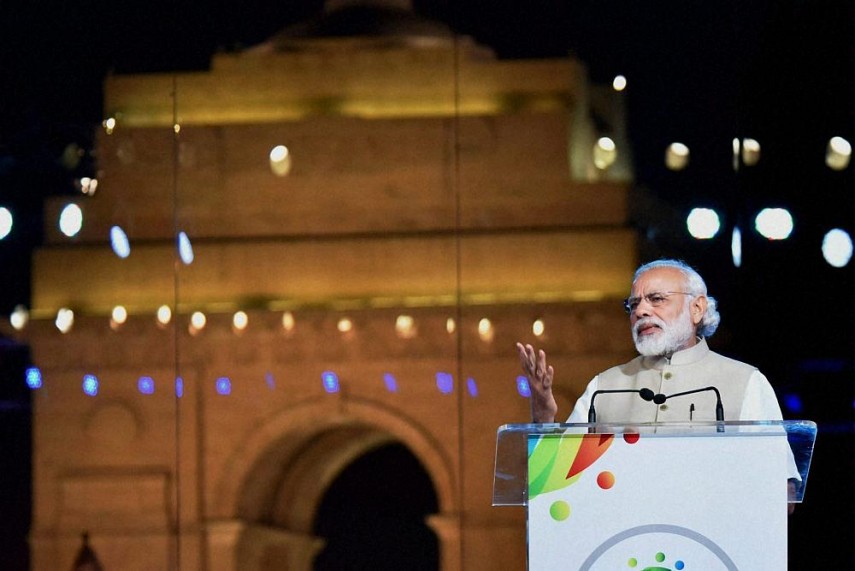 The Congress completed 10 years of Central rule without a peep or even a presser (of course, that was under Manmohan Singh), but the NDA turns two in office and turns it into a extravaganza akin to winning the Battle of Waterloo! That may not be surprising considering one of the 50 achievements being hailed is the setting up of flush toilets but even then, it all seems a tad excessive. Does a 56-inch chest really need any more puffing up? Since it is bad form to diss a party on their birthday party, here's a look at the Modi government's big bang achievements since May, 2014, as the BJP is playing it, and the ground reality.

2. Winning the Kerala elections………one seat but it's like the party almost won the state.

3. Eliminating Corruption. No big scams but trying to pin every big scam on one family dilutes the effort.

4. Eliminating Congress. Nice try but the Congress actually won more seats and had a higher vote share than the BJP in the recent assembly elections. The BJP's spinmasters are expert at taking any outcome and spinning it so you never know who won and who lost.

5. Eliminating poverty. Forget the hype, the poor are not about to be replaced by happy shiny people. Bank accounts with no money in them are a poor substitute. Literally.

6. One Bright Spot in the global economy. In the kingdom of the blind, the one eyed man is king, as a wise man recently said.

7. Smriti Irani. Debatable as a big achievement though she has certainly livened up public discourse with her filmi dialogue and serial attacks on Rahul Gandhi.

9. Subramanian Swamy. Using Swamy as a weapon is like giving a burglar the keys to your house. Already, he has embarrassed the government with his attacks on Raghuram Rajan—the one bright spot in officialdom.

10. Prosperous Farmers for a Prosperous India. So screams the headline on the brochure detailing the government's 2-year achievements. Generous use of the air brush leaves out mention of waterless swathes in Marathwada and the hardship faced by farmers across the country. Great PR work, though, with a morphed cover photo of a grateful farmer embracing Modi against the backdrop of lush green fields.

11. Spreading Democracy. The ladoos distributed to all and sundry last week could have been Modichoor ladoos since his imposing frame features in every frame of the elaborate publicity material and not the ministers in charge. Reality check—we have a Presidential form of government in everything but name.

12. Smart cities. A smart title but looking at the ones included in the latest list suggests it's like putting false eyelashes on a pig.

13. Ease of Doing Business. tall claims that India has improved its ranking, conveniently forgetting to mention that it still ranks 130 out of 189 countries, behind Burkina Faso, Burundi and Botswana.

14. Workaholic PM. A government hand-out says Modi has not taken a single day's holiday in two years, working on Sunday's and official holidays, even on the plane returning from his foreign trips. What does he do to de-stress? Do push-ups? Chat with world leaders on Skype? Throw darts at Sonia Gandhi's poster? Play Monopoly with Amit Shah? All of the Above?

15. Raising India's profile globally. Modi calls ‘Barak' a friend and says they are so close they can snapchat about anything, but imagine a Trump Presidency and there could be call drops in the offing.

16. Most number of Schemes. The acronyms have come at us like a bullet train, all very high-sounding and ambitious but like the same bullet train, yet to reach the station.

17. Proud to be Indian. Myth-creation is the BJP's biggest achievement. We have always been proud to be Indian except when we beat Africans to death and mobs lynch a Muslim over a false rumour to do with beef eating.

18. Most Inspirational Prime Minister ever. Could possibly achieve that status if BJP governments continue to eliminate all mention of Nehru from their history books.

19. Encouraging Free Speech. True, if one accepts the symbolic gesture of gifting the Speaker a Jaguar luxury sedan.

20. Two Year Itch. Which government celebrates a two year birthday? What this occasion displays the most is an uncontrollable itch to roll out the red carpet, line up the celebrities led by Big B, put Modi on stage and behind a microphone or a selfie stick and call for a celebration. There may be some positives to play up over the last 24 months but this over-the-top self-congratulation is really like papering over the cracks. With glossy paper, of course.