It's Advantage T-Series As Youtube War With PewDiePie Continues 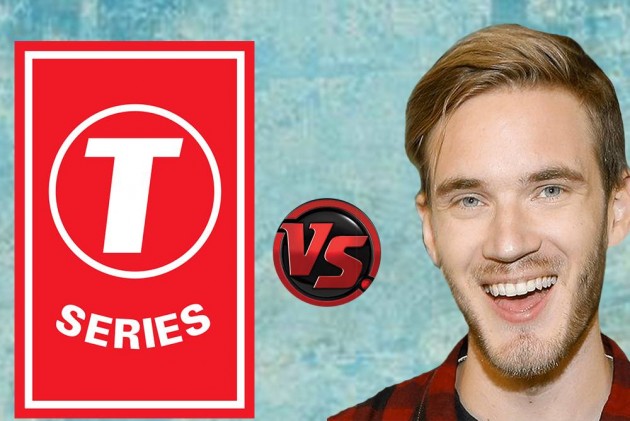 As of today, T-Series has over 90.49 million subscribers, while PewDiePie has a count lower than 90.47 million. The strong neck-and-neck online war between the Indian film production house and music label and the Sweden YouTuber has been closely followed by millions across the globe.

T-Series’ YouTube channel started its internet venture on March 13, 2006 and currently has 29 sub-channels that feature songs and film trailers.

PewDiePie, a 29-year-old Swedish man, also known as Felix Arvid Ulf Kjellberg, is a hugely popular comedian and video game player–commentator. He has been ruling the YouTube subscriptions for a long time. The channel generally produces content for millennials and shares reviews, reactions and comments on games. PewDiePie had recently shifted his content to vlogging on YouTube.

According to a report by Matthew Patrick's 'Game Theory', T-Series has been gaining an estimated 100,000 followers each day since mid-2018 and adding up to 3-4 million new users every month.

The digital war took a bitter turn and even showed up on the shiny billboards of Times Square in New York where another YouTube creator Justin Roberts had taken out ads in New York City’s Times Square, and even plastered walls in many places with “Subscribe to PewDiePie” posters in December 2018, as reported by The Verge.

On the other hand, Chairman of T-Series Bhushan Kumar launched a social media campaign and posted a video, saying, "We’re on the brink of becoming the world’s biggest @YouTube channel. We can make history. We can make India win. Subscribe to @TSeries", with #BharatWins.

We’re on the brink of becoming the world’s biggest @YouTube channel. We can make history. We can make India win. Subscribe to @TSeries #BharatWinsYouTube https://t.co/izEu8dzHdf pic.twitter.com/dJumzHwADa

As the Indian channel makes history, there are underlying factors which have helped push it to the top.

According to Matthew Patrick, T-Series did not become a superpower on the internet overnight. There are various reasons that helped boost the Indian music production giant’s subscriptions.

A look at some of the factors which are shifting the trends from the West to the Asian world.

1. Low level of competition in the Indian digital market is one of the main reasons for the gradual growth of T-Series. Besides competition, unbeatable video quality and quantity are the major win-wins for gaining millions of YouTube users in the past few months. The channel puts out four to six beautifully produced videos each day that irrefutably boost T-Series’ visibility in the ‘recommended’ section for every Indian user’s YouTube page, whether new or old.

2. Music content occupies more than 30 per cent of the top 100 channels on YouTube. T-Series, too, is a music videos-dominated channel which makes its content replayable. The channel has stored their music videos which were produced over decades on the single platform- YouTube. It has also played out by catering to a regional and diverse set of audience, which includes multiple genres from Bollywood top numbers to Bhajans in regional languages, which have been branched out under various channels like ‘T-Series Apna Punjab’ and ‘Shabad Gurbani’.

3. As the quantity of videos produced each day is relatively higher than any other producer in India, T-Series attracts a large number of advertisers on its channel. With the videos flashing in the ‘Recommendation’ section consistently, advertisers manage to get an organic promotion in YouTube's algorithm and at the same time, benefit the music giant.

4. The strategy of Multi-Channel Network in affiliation with YouTube also acted as one of the important factors in boosting subscriptions on T-Series’ YouTube channel. An MCN is a collection of small channels under a renowned brand name which helps the small-scale video producers promote their content on the already established brand’s channel and vice-versa. In a way, all the channels are then used to promote each other's content through related or follow-up videos.

The strongest reason that stands for YouTube subscriptions being swayed by T-Series is its native content produced by Indians, for Indians and are considered more pleasing for the Indian viewers. T-Series, in fact, invites content creators to contribute to the content of the channel.

India is already the second largest online market worldwide with only about half of its population online, with 462 million people with internet access, as reported by Statista (2018). It is to be noted that the Indian population stands at 1.35 billion, according to a UN report 2018. This, in turn, will pose as a favourable market for T-Series to further expand its empire in the digital kingdom, Patrick says.