Insurgents armed with Kalashnikovs and suicide vests attacked the landmark Intercontinental Hotel late on Saturday in an assault that lasted more than 12 hours. 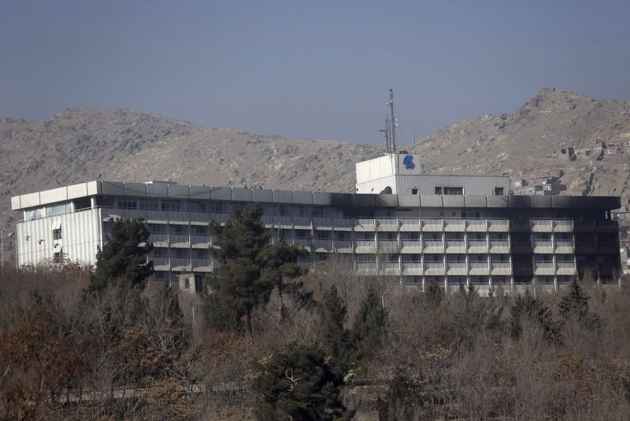 Taliban militants who killed at least 22 people at a luxury Kabul hotel went from room to room searching for foreigners, survivors said on Monday as more details of the victims emerged.

Insurgents armed with Kalashnikovs and suicide vests attacked the landmark Intercontinental Hotel overlooking the Afghan capital late Saturday in an assault that lasted more than 12 hours and prompted questions over how the attackers breached security.

Guests hid behind pillars and in rooms as gunmen sprayed bullets and set fire to parts of the six-storey building. Some people climbed over balconies, using bed sheets in a desperate attempt to escape.

"They were saying kill the foreigners," a 20-year-old hotel employee who gave his name as Hasibullah told AFP from his hospital bed.

He described hiding in a fifth-floor room and listening as the gunmen went from room to room, forcing doors open "with daggers" and killing those inside.

One other witness claimed he had seen the militants beheading guests.

The attack ended on Sunday with all six militants killed by Afghan forces, aided by Norwegian troops.

"Some of the bodies (are) burned badly and need DNA tests to be identified," he said.

The interior ministry gave a lower toll Monday, saying 19 people were dead, 14 of them foreigners.

Authorities are known to understate death tolls in high- profile attacks, while much higher figures were circulating on local media.

At least seven Ukrainian citizens were among the dead, the country's ambassador to Tajikistan and Afghanistan Viktor Nikitiuk told Ukrainian television 112.

"A lot of Ukrainian aviation technicians work in Afghanistan. All the dead were working for the airline Kam Air and living at the Intercontinental Hotel," he said.

Kam Air, an Afghan carrier, said at least nine of its personnel had been killed in the assault, but said it would not reveal their nationalities without more official information.

Captain Samad Usman Samadi, the airline's CEO, told AFP his staff "has been shocked and they are not in normal conditions."

"It will some time for them to recover," he said.

Afghan officials told AFP that senior Afghan diplomat Abdullah Poyan was killed along with Mufti Ahmad Farzan, a member of the High Peace Council responsible for reconciliation efforts with militants.

The employee Hasibullah said he saw two "fashionably dressed" gunmen in the hotel restaurant before the assault began.

"It was around 8.30 pm... They were sitting in the corner of the hotel, and they immediately started spraying bullets," he said.

He ran to the fifth floor room and locked himself inside, though not before seeing "many" bodies on the ground.

But as the gunmen went from door to door he leapt from the window in terror. "I fell on people lying in blood... It was horrific."

Knocked unconscious, he awoke in hospital with a broken leg and other wounds.

"We believe they were inside from before," he told AFP of the attackers.

Another survivor told AFP the attackers "even beheaded the guests and people inside the hotel".