In a high level meeting of the ministers and officials at Tamil Nadu secretariat, Chief Minister M.K. Stalin directed the state agriculture minister and chief secretary to conduct a detailed study on the losses incurred by farmers, including the poultry and cattle farmers. 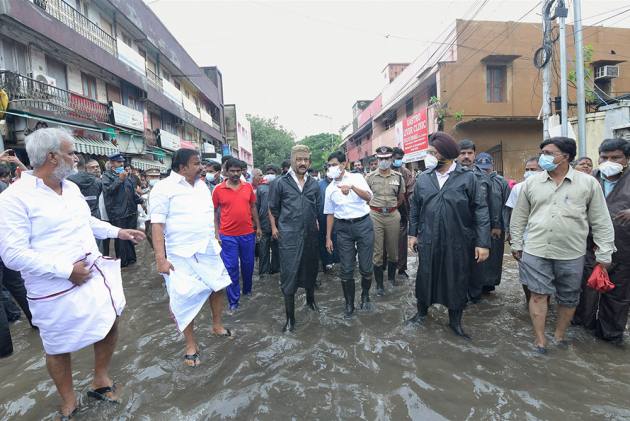 A detail study will be conducted by the Tamil Nadu Agriculture department, on the losses incurred by farmers in the recent heavy rainfall. In a high level meeting of the ministers and officials at Tamil Nadu secretariat, Chief Minister M.K. Stalin directed the state agriculture minister and chief secretary to conduct a detailed study on the losses incurred by farmers, including the poultry and cattle farmers. The state agriculture minister M.R.K. Panneerselvam later during a meeting directed the officials to take district wise data on the crop losses, poultry and cattle deaths.

The cultivation of banana and the sale of banana leaves are the major source of income for farmers of the Tiruchy area and the devastating rainfall caused a 40 per cent loss of the crop. Banana Leaf Traders Association president, M. Mathialagan while speaking to IANS said, "Rains have done havoc to the banana farming and the excessive water in the fields have led to the yellowing of the leaves and this has affected our business. The trade is hit more than 40 per cent due to rains."

In Cuddalore, the farmers complained that around 22,000 acres of farmland were flooded with water after the Thenpennai River entered farmlands. This has led to the losses of crops like black gram, corn, cotton, vegetables, and fruits. M.Swaminathan, a black gram farmer at Cuddalore while speaking to IANS said, "We have already applied for compensation to the district administration and intimation has come that the district administration and agriculture department will conduct a meeting with the farmers' associations and take a decision on the compensation to be given. We are expecting fair compensation."

In a meeting between the farmers association and agriculture department officials at Myladuthurai on Saturday, farmers demanded a compensation of Rs 30,000 per acre for completely damaged crops and Rs 10,000 per acre to re- transplant crops affected by the rains.

Mukundadas, President of the Paddy Farmers Association of Myladuthurai while speaking to IANS said, "Its heartening to note that the Tamil Nadu Chief Minister has taken care of agriculturists and directed the agriculture department to immediately conduct a meeting with the farmers and representatives to provide compensation for crop losses. We welcome the decision and expect the agriculture department to provide fair compensation to us."

Poultry farmers have also lost heavily during the rains and in many parts of Coimbatore, Namakkal, Pollachi areas each farmer has complained of the losses of more than 3,000 chickens in the flooding.

Tamil Nadu Agriculture minister M.R.K. Panneerselvam while speaking to IANS said, "We are into a detailed study on the agriculture losses incurred by the farmers during the rains and will provide a proper compensation after meeting with the association leaders and the officials. I will be holding meetings with the officials and farmers. The Chief Minister has specifically instructed all of us to provide the compensation as early as possible."