Incidentally, in Jammu and Kashmir, instead of the State Congress, it was the National Conference, which was first to felicitate Karra while state Congress leaders were silent about the development. 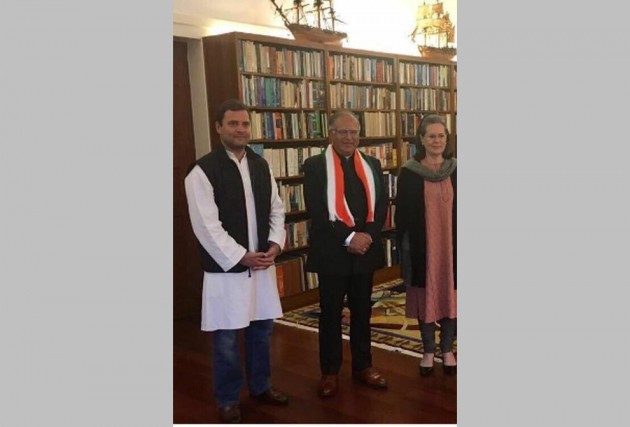 Incidentally, in Jammu and Kashmir, instead of the State Congress, it was the National Conference, which was first to felicitate Karra while state Congress leaders were silent about the development.

“Congratulations & best wishes to @tariqkarra as he begins his new innings as a member of @INCIndia”, tweeted NC working president, Omar Abdullah.

Congratulations & best wishes to @tariqkarra as he begins his new innings as a member of @INCIndia pic.twitter.com/rAfMo0WTLY

Best wishes to @tariqkarra Sb on his new innings as he joins the Indian National Congress.

On September 15, last year, Karra resigned from his party, PDP, and the Lok Sabha.

“Every single day, Kashmiris are being butchered, fathers carrying coffins of their beloved sons, hundreds being blinded and thousands being injured…Kashmiri blood is being spilled on walls, lanes and drains of the valley. For the first time in the history of Jammu and Kashmir, people of Kashmir were not allowed to offer Eid prayers. Grand mosque and shrines were locked.  My apprehension that the PDP’s facilitated RSS backed BJP will impose religious ingression stand vindicated today,” Karra had said while addressing a press conference at his Shiv Pora residence before announcing his resignation last year.

“My conscience cannot take it any long. My heart is bleeding and my soul is crying for the people of my homeland. Hence taking a call of my conscience and as mark of protest on moral grounds against the brutal policies of the BJP at the centre and the state government’s complete sell out and surrender before them, I have decided to disassociate myself from the primary membership of PDP and from the membership of Parliament,” he had said.

After protests erupted in Kashmir during the summer unrest of 2016, Hurriyat Conference and other separatist political parties had appealed to pro-India political leaders, legislators and the MPs to resign and join the “people’s movement.”

Karra had blamed the alliance between the PDP and the BJP for being responsible for the 2016 unrest, saying the “seeds of deceit, discontent and betrayal got sown in the hearts and minds of the people that very day when PDP got into an alliance with the BJP and formed a government.”

At least 80 civilians were killed and over 10,000 injured, by government forces firing bullets and pellets at stone and rock-throwing protesters during summer unrest of 2016.