TDP No More In Telangana, No Question Of Tie-Up: BJP

For the BJP, the N Chandrababu Naidu-led oufit is "no more" there in Telangana. 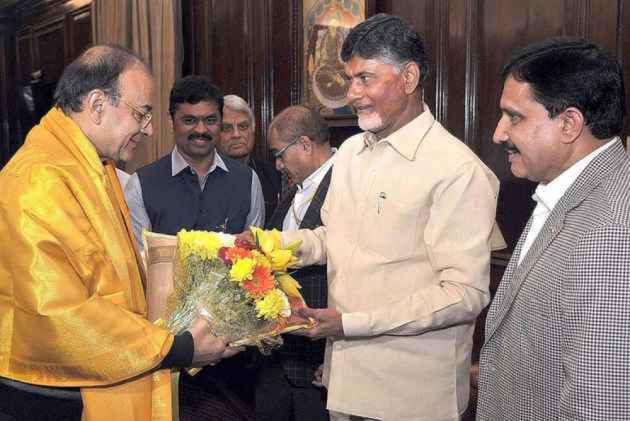 Although question marks are being raised over the BJP-TDP alliance in Andhra Pradesh in the next elections amid reports of strain between the two parties, there is no uncertainty in Telangana, where the Amit Shah-led outfit is going solo.

For the BJP, the N Chandrababu Naidu-led oufit is "no more" there in Telangana.

Telangana BJP spokesperson Krishna Saagar Rao reiterated today that his party would have no tie-up with the TDP (Telugu Desam Party) in the state.

"Perception of the people of Telangana is TDP is an Andhra party. So obviously, there is no space for the party from the other side (Andhra Pradesh) in Telangana region. This is not what the BJP is saying, but this is what the mandate of the people in the last election was," he told PTI.

The results of the election to Greater Hyderabad Municipal Corporation (GHMC)-- in which the TDP put up a poor show despite the presence of "settlers" (those from AP) in the city -- also proved that there is no space left for that party, Rao said.

In the 2014 elections, the TDP and the BJP had an electoral alliance.

The TDP had won 15 seats and the BJP five in the 119-member Telangana Assembly.

But today, the TDP is a heavily depleted outfit, as it is left with two MLAs only, with 12 of them joining the ruling TRS (Telangana Rashtra Samithi) and another embracing the Congress.

"There is no leader left to name in TDP apart from all MLAs shifted off, except for one or two. These three factors (perception about being Andhra party, poor show in GHMC elections and no leader worth the name left) establish the fact that TDP is no more in Telangana. So, how can you have an alliance with a party which is no more?" Rao said.

On Telangana Joint Action Committee (TJAC), chaired by M Kodandaram, recently floating a new party, he said BJP feels there is no space in Telangana for a new political outfit as there is "lot of crowding in the space".

He said it's going to be a three-cornered contest between the BJP, the ruling TRS and the Congress in the next elections.

He also noted that the Left parties have launched a front recently. Film star-turned-politician Pawan Kalyan is also "making some attempts to field his candidates".

"So, there is lot of crowding in the space. BJP certainly feels Kodandaram's party will not take off, and will have no takers in Telangana", Rao added.

The TDP had publicly voiced unhappiness over the recent Union budget not offering any special benefits to Andhra Pradesh, leading to speculation over future of the alliance between the two parties.