Tejashwi Reaches Patna With Wife, Lifts The Veil On Her Name

About the hushed manner in which his wedding took place, he said, “It was an occasion for two families to get acquainted with each other. Had we invited lots of guests, all attention would have got diverted towards them.” 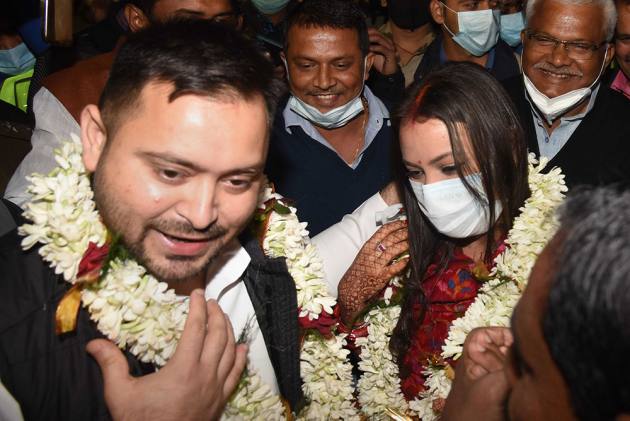 Rachel Iris is the name of Tejashwi Yadav's wife who has been rechristened as “Rajshri” by Lalu Prasad himself for the sake of ease of pronunciation, the young RJD leader disclosed on Monday.

The leader of the opposition, who tied the knot in Delhi last week, returned to his home turf of Bihar along with his spouse during the day. Pictures of the couple inside the plane – the bride dressed in a red sari and the groom sticking to white Khadi kurta-pyjama – have gone viral on social media.

A large throng was seen outside the Patna airport where the plane landed at around 8.30 pm. Leaders and party cadre danced to drum beats, belying the nip in the air, to express their delight. The couple were welcomed with traditional fanfare by Tejashwi's mother and former chief minister Rabri Devi at her 10, Circular Road, residence.

The 32-year-old leader, who had made a sensational political debut in 2015 assembly polls after which he was straightaway appointed as the deputy CM, expressed delight over greetings extended by his former boss Nitish Kumar. “It is a healthy thing that political differences aside, we remain courteous on family occasions,” said Yadav.

Yadav was asked by reporters about the suspense surrounding his wife's name. “Her name is Rachel Iris. She will now be known as Rajshri, a name chosen by my father and accepted by her for the sake of ease of pronunciation,” said Yadav, though he did not specify whether the change of name followed a change of religion by the bride.

He did not share much details about his wife, saying “Let us save something for the future”. When asked what surname would his wife use, Yadav quipped “of course, it would be Yadav”, evoking peals of laughter.

About the hushed manner in which his wedding took place, he said, “It was an occasion for two families to get acquainted with each other. Had we invited lots of guests, all attention would have got diverted towards them.” He expressed annoyance over the rants of his maternal uncle Sadhu Yadav who has taken exception to the nephew marrying a “Christian girl”.

“He is an elderly family member whom I have always treated with respect. I do not wish to comment much on what he has been saying but I must add that we are socialists, followers of Ram Manohar Lohia who stood for eradication of social boundaries,” said Yadav.

He also sought to clear the air on a picture brandished by his maternal uncle before the media, claiming that a skimpily clad girl posing with his nephew was his wife. “She is certainly not my wife. The picture, which has often been used by detractors too, belongs to my past. Everybody knows that I was part of an IPL team and the culture prevailing there is no secret”, he said.