Under the Panchayat Raj Act, which was recently passed by the state government, around 4000 villages, 15000 tribal hamlets will be converted to gram panchayats. 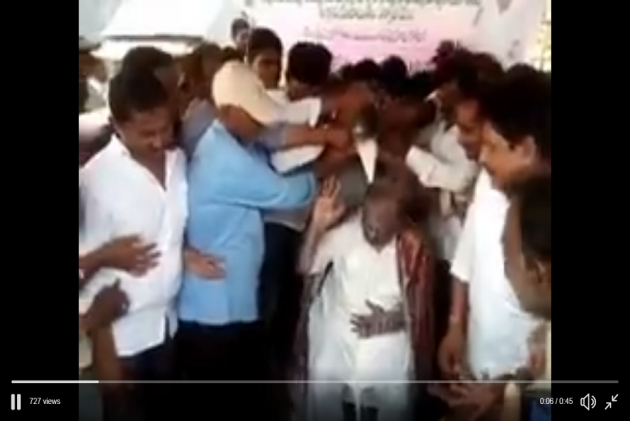 Village residents of Warangal district of Telangana gave a milk bath to their Speaker, Madhusudhana Chary for inaugurating a new gram panchayat office in Warangal district on Sunday. Villagers and TRS activists from Shayampeta, poured milk on him to honour him for this deed, Thenewsminute reported.

They made Chary sit in a chair and took turns to pour milk on his head, that is, gave him a milk ‘abhishekam’. Chary was also seen subtly protesting in the video. While taking pouring milk on Chary’s head the fans also shouted ‘jai Telangana’ slogans.

Milky Galaxy in #Telangana. Thanksgiving to the Speaker of Telangana assembly Madhusudhana Chary in his constituency Bhupalapalli in #Warangal. pic.twitter.com/k1DddICEgy

Under the Panchayat Raj Act, which was recently passed by the state government, around 4000 villages, 15000 tribal hamlets will be converted to gram panchayats. At present, according to Telangana government website, there are 8684 gram panchayats.

Chary has taken many unconventional decisions for the benefit of the people before, TNM reported. He conducts ‘Palle Nidra’, a programme in Bhupalapally, where Chary stays a night with the villagers and learns about their experiences.

But according to Congress spokerperson, it’s a waste of resources. Dasoju Sravan Kumar told TNM, “This is also against the spirit of democracy. The supposed upliftment of tribals by TRS is a false claim… the CAG report has exposed the poor utilisation of ST sub-plan funds,” TNM reported. He also said worshipping politicians like this is also harmful for democracy.