The temple would be closed on October 22 after the five-day monthly prayer during the Malayalam month of Thulam. 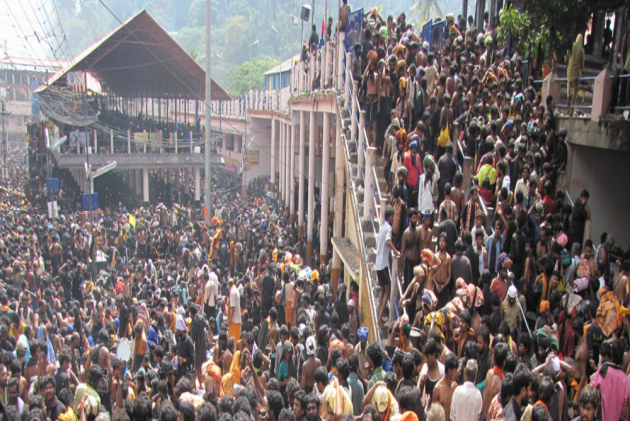 Tension is brewing in some parts of Kerala hours ahead of the opening of the ancient Sabarimala Temple for monthly prayers Wednesday with devotees opposing the Supreme Court order stepping up protests and police taking some of them into custody.

Two women devotees could not proceed to the shrine after protests against the decision to allow women in the menstruating age into the Ayyappa shrine.

A woman from Andhra Pradesh, in the below 50 year age group, who tried to climb the Sabarimala Hills to reach the Lord Ayyappa temple, returned to Pamba following protests by male devotees.

She was provided security by the police to climb the hills but was forced to return after protests.

A woman from Alappuzha district, said to be in the below 50 years age group, who was on the way to Sabarimala armed with the Supreme Court order was stopped from proceeding at the Pathanamthitta bus terminal by passengers.

The passengers including women chanting Ayyappa mantra urged the woman, Liby, not to violate the centuries-old custom of the shrine where women in the menstruating age group are not allowed.

Liby said she would climb the hills and no one had the right to violate the freedom granted by the Supreme Court.

The woman was later escorted out to the bus station by the police.

Police have strengthened security in Pamba, Nilackal and Erumelithe, which are important centres to be covered before reaching Lord Ayyappa temple in Sabarimala.

Some people were taken into custody by police at Nilackal for staging protests against the decision to allow women in the menstruating age into the Ayyappa shrine.

Kerala Police chief Loknath Behera said in Thiruvananthapuram that no one would be allowed to disturb the law and order situation in the state.

Hundreds of protesters have gathered at Nilackal, the main gateway to Sabarimala, hours after the police used force to disperse devotees opposing the entry of girls and women of menstrual age into the hill shrine.

Earlier, the police, deployed in large numbers in Nilackal, some 20 kms away from the Sabarimala hilltop, had removed a makeshift shelter erected by a protesting group-
Sabarimala Achara Samrakshana Samiti.

The protesting group of devotees had been staging a sit-in chanting Ayyappa mantra in the shelter in protest against the Supreme Court order permitting women of all age
groups to enter the shrine.

The small group of protesters ran away from the spot when the police initiated action in the early hours of Wednesday when they tried to block buses at the key entry point to the temple.

Hours ahead of the opening of the hill shrine for the monthly prayers, police said they would not let anyone block the movement of people.

Taking full control of Nilackal, police also warned against those who creating hurdles for pilgrims.

Police took strong action against the protesters after some of them checked vehicles heading to Pamba and prevented women in the age group of 10 and 50 from entering the hill shrine.

A couple from Tamil Nadu, aged 45 and 40, on their way to Pamba, were forced to get off from the KSRTC bus Monday night allegedly by some activists of the Sabarimala Achara Samrakshana Samiti.

Although the couple had said that they would go only up to Pamba and not climb Sabarimala, the activists stopped them from proceeding.

The police later took them to safety.

Some activists of the Sabarimala Achara Samrakshana Samiti, who had stayed back at Nilackal, also allegedly
prevented mediapersons from carrying out their work.

Crew of various TV news channels were asked to leave the place. They were able to return to the spot after additional policemen were deployed in the area.

Around 500 police personnel, including women, have been deployed in Nilackal to ensure a safe passage to pilgrims to the Lord Ayyappa temple.

Meanwhile, another group of devotees said they would stage a Gandhian-style peaceful protest in Pamba.

The shrine located on the mountain ranges of the ecologically fragile Western Ghats opens later in the evening for the first time after the recent Supreme Court order.

Chief Minister Pinarayi Vijayan has said no one would be allowed to block devotees from proceeding to Sabarimala.

Groups of women devotees including senior citizens, clad in traditional sarees, had stopped each and every vehicle at Nilackal Tuesday.

Besides private vehicles, devotees even stopped and inspected Kerala State Road Transport Corporation (KSRTC) buses and asked young women to get off them Tuesday.

Very few police personnel were present when the incidents happened.

Protesting women had said no women belonging to the banned age group of 10-50 will be allowed to travel further from Nilackal and offer worship at the shrine.

The temple would be closed on October 22 after the five-day monthly prayer during the Malayalam month of Thulam.

The Supreme Court had on September 28 passed a historic judgement lifting the ban on entry of girls and women of menstrual age into the temple, a verdict that was hailed by rights activists but opposed by traditionalists.