Terror At Our Doorstep

The attack at Wagah re-emphasises the deepening anarchy across Pakistan, with terrorists operating at will, even within Pakistan’s 'stable' Punjabi heartland. 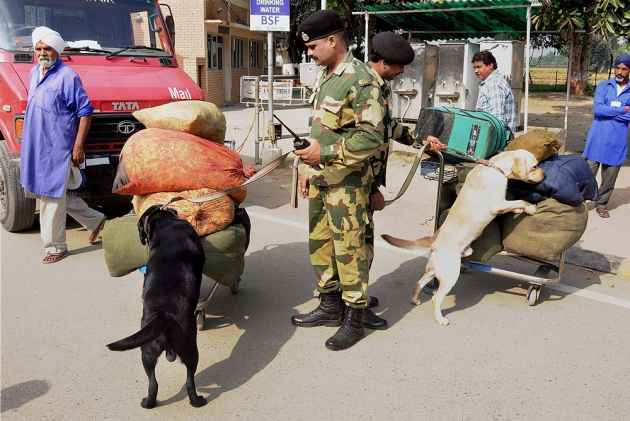 At least 60 people, including children and women, were killed and more than 150 persons were injured when a suicide bomber detonated his suicide vest in the parking area, at least 500 meters from the Wagah Border on the Pakistan side, at around 5:45pm [PST] on November 2, 2014. The death toll in the incident is likely to rise as many of the injured were in critical condition. Wagah, a town on the outskirts of Lahore, the provincial capital of Pakistan’s Punjab Province, falls along the India-Pakistan border (on the Indian side lies Amritsar in the Indian State of Punjab). Indian and Pakistani forces hold a flamboyant flag-lowering ceremony at Wagah every day.

Giving details about the incident, Inspector General Police (IGP) Punjab, Pakistan, Mushtaq Ahmad Sukhera stated, "A large number of people were returning after watching Rangers flag ceremony at Wagah border when a suicide bomber blew himself up near one of the exit gates. At least 15 to 20 kilogrammes (of) explosives have been used in the blast, showing some of the explosives was in his suicide jacket and remaining he might have carried."

This particular attack re-emphasises the deepening anarchy across Pakistan, with terrorists operating at will, even within Pakistan’s 'stable' Punjabi heartland. In the current year, Pakistan has already recorded a total of 4,260 terrorism-linked fatalities, including 1,458 civilians, 459 Security Force (SF) personnel and 2,343 terrorists [all data till November 2]. 4,897 fatalities, including 2,756 civilians, 602 SF personnel and 1,539 terrorists were recorded in the corresponding period of 2013.

Meanwhile, reports indicate that intelligence agencies had informed the Punjab government about the possibility of a terror attack targeting Shias, religious personalities, public processions and important buildings, during Muharram (the first month of the Islamic calendar), between October 24-November 23, 2014. Indeed, the federal minister of interior Chaudhry Nisar Ali Khan, on November 2, 2014, noted that the ministry of interior had issued a warning of a suicide bombing in Lahore. IGP Sukhera claimed there was specific intelligence that terrorists could target the Wagah border post. Nevertheless, the attack took place despite the government's claims that it was 'ready to meet any eventuality'.

On October 27, 2014, Punjab Chief Minister Shahbaz Sharif had asserted that “foolproof” security arrangements had been made in the province to maintain law and order during the holy month of Muharram. A day earlier, Lahore capital city police officer Muhammad Ameen Vance had claimed that foolproof security arrangements were finalised to cope with any untoward incident in the provincial capital during Muharram. IGP Sukhera argued, “The Rangers had made stringent security measures but it was difficult to check suicide bomber."

The Wagah attack is not an incident in isolation and, in fact, demonstrates the widespread vulnerability across Pakistan, and the inherent weakness of the state. While Punjab has long been thought to be relatively insulated from the wider movements of insurgency and terrorism that have engulfed the country's other three provinces, this seat of military and political power in Pakistan has demonstrated increasing evidence of growing volatility.

Just in 2014, Punjab has already recorded a total of 162 fatalities, including 122 civilians, 18 SF personnel and 22 terrorists, as against 55 fatalities, including 43 civilians, four SF personnel and eight militants in the corresponding period of 2013, according to partial data compiled by the South Asia Terrorism Portal. Moreover, Punjab also recorded four suicide attacks, resulting in 82 fatalities, as against no such attack in the corresponding period of 2013. However, terrorists had carried out a suicide attack outside an Imambargah (Shia place of worship) at Gracy Line in Rawalpindi, on December 17, 2013, killing four persons. Likewise, four explosions, resulting in nine fatalities, were recorded in 2013 (till November 2), but the number of blasts as well as resulting deaths have witnessed a steep escalation in the current year, with at least 15 explosions registered, resulting in 49 fatalities, thus far. The numbers clearly suggest a rapidly deteriorating security environment in Punjab.

Meanwhile, three terrorist formations have claimed responsibility for the attack. The al Qaeda affiliated anti-Shia group Jandullah, claiming responsibility for the attack, declared that it was in retaliation to the ongoing military operations - Zarb-e-Azb and Khyber 1 - in the North Waziristan and Khyber Agency, respectively, of Federally Administered Tribal Areas (FATA). [Operation Khyber 1 was launched by the Pakistan Army on October 31, 2014]. Later, ‘rubbishing’ the Jandullah claim, Jamat-ul-Ahrar (Group of the Free Ones), a breakaway faction of the TTP, claimed that the attack was engineered by "our friend Hafiz Hanifullah" in retaliation against operation Zarb-e-Azb, and had been carried out to send a bold "open message to Governments on both sides of the border". JuA ‘spokesman’ Ehsanullah Ehsan declared, "It was a suicide attack and the target were the Pakistani Security Forces protecting the Shia community." Another group introducing itself as the TTP’s Mahar Mehsud faction also called reporters to claim responsibility for the attack.

Correctly identifying the actual perpetrators of the attack will be crucial in view of Islamabad's 'new policy' on fighting terror. Interestingly, on February 26, 2014, while unveiling its first ever counter-terrorism policy, Pakistan announced that “every act of militant violence would be met with retaliation on their bases”. Federal minister of interior Chaudhry Nisar Ali Khan had then announced, "We have made a significant shift in our policy, now we will react to each and every act of terrorism in the country with an attack on the headquarters of the militants along the Afghan border. Whenever there is a strike anywhere, we will target the headquarters of the militants and it is because of this new policy that we have been carrying out precise strikes in the tribal areas."

Operations in the tribal areas of FATA have been ongoing for last over four months. According to most reports, all the terror groups which have claimed responsibility for the Wagah attack are headquartered in these areas only. Since these areas are already under attack, “without any discrimination”, according to Islamabad's past claims, it is not clear what impact the 'targeting of militant headquarters' could possibly have. Crucially, SAIR has noted earlier that operations in the tribal areas have amounted to little more than pointless symbolism and the Wagah incident demonstrates that the operational capacities even of TTP-linked groups remain substantially untouched. Pakistan's broader strategy of sponsoring and protecting Afghanistan- and India-oriented terrorist formations, of course, remains entirely unchanged, creating an environment that allows anti-Islamabad groups to flourish as well.