Talking to reporters after being released from the jail at Karimnagar, Kumar vowed to continue the fight against the government order (GO) for the sake of teachers and other government employees and others. 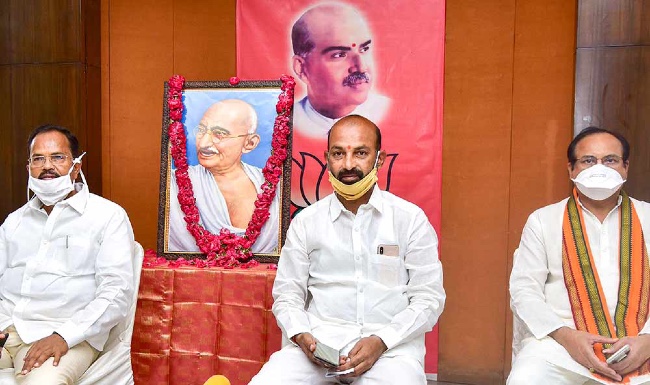 BJP's Telangana unit president and MP Bandi Sanjay Kumar, who was arrested two days ago for alleged violation of COVID-19 prohibitory orders over a protest, walked out of the jail on Wednesday after the Telangana High Court ordered his release.

Asserting that he is undeterred by his imprisonment, he said he was jailed while fighting for the cause of teachers and government employees and not because of any unscrupulous reasons. He demanded that the State government amend the GO.

The BJP leader was arrested on Sunday night for alleged violation of COVID-19-related prohibitory orders in connection with a protest against the GO. Alleging corruption by the ruling TRS, he asserted that his party would fight against it. Earlier in the day, on a petition filed by Sanjay Kumar, the High Court directed that he be released on furnishing a personal bond.

The court said Kumar must ensure that all COVID-19 norms are followed while carrying out his political activities. The court directed listing the matter for further consideration on February 7. Union Minister of State for Chemicals and Fertilisers Bhagwanth Khuba met Kumar shortly after his release. Kumar, a Lok Sabha member from Karimnagar, was on Monday sent to 14-day judicial remand by a court in the town following his arrest after a foiled protest plan.

BJP president J P Nadda had dubbed the police action as murder of democracy. Nadda had said Chief Minister K Chandrasekhar Rao, also the chief of the ruling Telangana Rashtra Samiti (TRS), acted out of frustration due to the BJP's win in a recent bypoll (Huzurabad) and the popular support it has been receiving in the State.

Kumar, whose planned protest was foiled on Sunday for alleged violation of COVID-19 guidelines, was arrested in Karimnagar on various charges, including violation of provisions of the Disaster Management Act and Indian Penal Code Section 188 (disobedience to order duly promulgated by a public servant).

Tension prevailed at the camp office of Kumar at Karimnagar on Sunday night when police forcibly entered it, breaking open the office gates in the face of resistance from BJP activists. Police had said there was no official request for permission to the planned protest and the gathering of the party workers was against the guidelines issued by the Central and State governments to prevent the spread of COVID-19.

The BJP described the State party chief's arrest as illegal and vowed to fight against it and also in support of teachers and other government employees.