That Fabulous First Time At The Top

The first ascent of Everest means much more to India than merely recalling the triumph. It was the beginning of serious and organised mountaineering in India. But 'if God had not made the Sherpas, Everest might yet be unclimbed.' Fifty years ago, on May 29, 1953, precisely at 1130 hours Nepalese Standard Time, a Darjeeling-based Sherpa, Tenzing Norgay, and New Zealander, Edmund Hillary, created history by reaching the highest point on the earth for the first time. This feat was achieved after several unsuccessful expeditions since 1921, the most important of these was the epoch-making attempt by Mallory and Irvine in 1924 in which they were last seen about 500 feet short of the summit. The world still does not know whether they died before reaching the summit or during their descent from the top.

This year the world is celebrating the Golden Jubilee of these two brave climbers. Sir Edmund and Tenzing’s son, Jamling, were the focus of celebrations in India on May 20 and 21. It was also an appropriate occasion to look back at the five decades of Indian mountaineering which had got kick-started by the first historic climb of Everest.

The first ascent of Everest means much more to India than merely recalling the Everest triumph. It was the beginning of serious and organised mountaineering in India. While this glorious ascent was hailed all over the world, in India, the two great visionaries, Jawaharlal Nehru and Dr. B.C. Roy, saw in this achievement an opportunity to introduce the sport of mountaineering in India. They immediately decided to set up the Himalayan Mountaineering Institute (HMI) in Darjeeling with Tenzing as Director of Field Training. The Prime Minister himself decided to become the Chairman of the Executive Council with Chief Minister, West Bengal, as the Vice Chairman. Courses at the Institute started on 14 November 1954, and this paved the way for systematic development and growth of mountaineering in India.

During the next three years, Indian teams climbed Kamet and Sakang. In 1958, an Indian Expedition, led by Keki Bunshah, climbed Cho Oyu, the sixth highest peak in the world. This was the first major Indian achievement. In 1959, an all-Naval Expedition, led by me, climbed Nanda Kot (22,500 ft.). This was one of the better known peaks of the Kumaon Himalayas, adjacent to Nanda Devi.

The ascent of Annapurna III by our Indian team was the most dramatic story of mountaineering during the last four decades. Till then it was an unexplored and virgin peak. While the team was halfway up the mountain, the local Bhotias, who were hostile to mountaineering expeditions, looted the base camp and took away two of our team members as hostages. It was only after protracted negotiations and on the intervention of the then Prime Minister Jawaharlal Nehru and His Majesty the King of Nepal that the two expedition members were released. In the midst of all drama, the virgin peak of Annapurna III was climbed by Sonam Gyatso, Sonam Girmi and me. The team returned to Pokhra under military escort.

The third Indian attempt on Everest in 1965, after two failures in 1960 and 1962, was a glorious success. In nine days, nine climbers, in four teams, reached the summit. On their return to Delhi, the team was accorded an unprecedented welcome; and honoured by the gracious presence of the Prime Minister at the airport. This expedition gave great impetus to Indian mountaineering. The Prime Minister, Indira Gandhi, described it as one of the six major achievements of India after independence.

Indian women did not lag behind. In 1961 the HMI courses were thrown open to women. Prior to this, the only instance of Indian women taking to heights was the inclusion of three Indian women in the International Women's Expedition to Cho Oyu in 1959, led by Kogan Claude. In 1981, a mixed team of men and women, under the leadership of Colonel Balwant Sandhu, was sent to Nanda Devi by IMF. Three girls, Chandra Prabha, Rekha and Harsha, and three men Palzore, Rattan and Lhatoo reached the summit. They were on their toes for 25 hours.

May 23, 1984, was as a red-letter day in the history of Indian mountaineering. It was on that day that Bachendri Pal became the first Indian woman to reach the summit of Everest. In 1993, IMF sent an All-Women Indo-Nepalese Team to Everest, led by Bachendri Pal. Eighteen climbers reached the summit. Santosh Yadav became the first woman in the world to climb Everest twice. 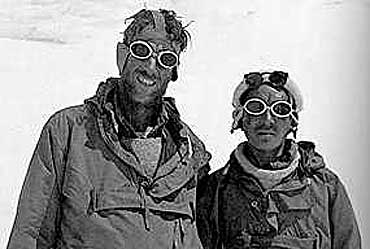 While India welcomed Sir Edmund Hillary during the celebrations, in New Delhi, Tenzing was sadly missed by millions of his admirers. Today, there are thousands of climbers in the country who were trained by Tenzing during his 23 year stewardship of the HMI. Till the end of last year, 64 Indians ascents have been made to the top of Everest. Most of the summiteers were former trainees of Tenzing.

I first met Tenzing in 1956 during my basic mountaineering course at the HMI. After reaching the training area in Sikkim, I was charmed by his graceful and effortless strides up and down the slopes. Every one of us was inspired by his presence. He was simple, humble and down to earth. Whenever Tenzing was in Darjeeling he was mobbed by visitors. Each and every one of them would venture into his office to shake hands with him; several others wanted to be photographed with him. He was friendly and at the slightest provocation would switch on his usual broad grin. But there is a limit to man's stamina. After a while he would get most upset and hide himself. Once I saw him running away from a pestering group of people to the Sherpa Coffee House and from there to my residence. The group still followed him. "Bhaiya (brother), they harass me so much, I am like a monkey in the zoo, everyone wants to be photographed with me", he moaned. Well, that was the price of fame Tenzing was paying!

I often arranged for Tenzing to accompany me on my various tours abroad on behalf of Air India to popularise trekking in the Himalayas -- a new segment of tourism I had conceived in 1971 on joining Air-India. I found his company most enjoyable. He had a tremendous sense of humour and a ready wit. Though he was not educated, he managed every situation confidently and spoke English quite well. Once in Mumbai, I invited him to address members of the International Tourism Council. He started beautifully: "Several years ago I was in Bombay. It was a beautiful and clean place then. I walked along Marine Drive where the sea waves were beating against the wall of Marine Drive. There was no sign of rubbish anywhere. Today Bombay is full of rubbish…." He continued non-stop for about 15 minutes. At the end there was a standing ovation. Nobody had expected Tenzing to be such an orator.

The golden Jubilee is also an appropriate occasion to look back at the legendary Sherpas who have shaped the history of Himalayan climbs during these five decades. ‘If God had not made the Sherpas, Everest might yet be unclimbed.’ Indeed it is difficult to think of the great triumphs of Himalayan mountaineering without instinctively recalling to mind this indomitable band of high altitude men. The Sherpas belong to the Himalayas and their home in the Solu-Khumbu region of Eastern Nepal is landscaped by the supreme architecture of Everest, Lhotse, Nuptse, Pumori, Ama Dablam and Cho Oyu. Namche Bazar, their principal village, nestles under Everest.

A negative aspect about the great popularity of Everest is the loss of forest cover in the Himalayas and accumulation of rubbish on trekking trails and at base camps of popular peaks. The Himalayan Environment Trust, founded by Sir Edmund Hillary and myself in 1989, has spread awareness about these problems all over the world. Today the mountaineering community is strictly following the Himalayan Code of Conduct, finalised by the HET.

During the past 50 years India has emerged as a leading country in mountaineering and adventure. Today there are some 100 Indian expeditions to the Himalayas, with about 2 lakh trekkers and over 50 lakh pilgrims heading for several Himalayan shrines, not to talk of many others engaged in white-water rafting and aero sports.

During the Golden Jubilee Celebrations in New Delhi, two roads in the Diplomatic Enclave were named after Tenzing and Hillary. A special stamp was also issued by the Government of India. These honours are most deserved by Sir Edmund and Tenzing Norgay who gave a lot to India.

(Captain M.S. Kohli is the Chairman of Himalayan Environment Trust and former President, Indian Mountaineering Foundation. His book ‘Mountains of India’ ‘Spies in the Himalayas’ and ‘Sherpas - The Himalayan Legends’ have been released recently.)