He completely and utterly dominated chess like no one had before. "Nobody has single-handedly done more for the US than me" by making it seem "as an intellectual country" he had once claimed. He was the original American icon before he became a fugi Bobby Fisher, the troubled American Chess genius, is no more. His spokesman, Gardar Sverrisson, has said Fischer died in a Reykjavik hospital yesterday, January 17. There was no immediate word on cause of death. He was 64. He may have been the greatest chess player of all time, but ended his life in what had come to be seen as "eccentric seclusion".

A fierce critic of his homeland, the Chicago-born, Brooklyn, NY-reared Fischer was wanted in the United States for playing a 1992 rematch against Cold War rival Boris Spassky in Yugoslavia in defiance of international sanctions.

He had renounced his US citizenship, moved to Iceland in 2005 and lived there for the last two years. Before that he had served eight months behind bars in Japan

He was a high school dropout. He was arguably the greatest chess player of all time. He was said to have an IQ higher than Albert Einstein's. An American chess champion at 14 and a grand master at 15, Fischer had become an icon when he dethroned the Soviet Union's Boris Spassky in 1972 in a series of games in Iceland's capital, Reykjavik, to claim America's first world chess championship in more than a century. 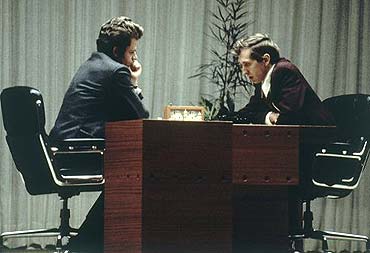 Bobby Fischer, right, and Boris Spassky of Russia, play their last game together in Reykjavik, Iceland, in this Aug. 31, 1972 file photo

In the 1972 "match of the century" in Iceland, Fischer, throwing regular tantrums over the position of cameras and the audience, relied on his own wit to end 24 years of Soviet chess supremacy by dethroning Spassky, who had by his side an army of Russian master strategists.

Fischer, whose chess education had consisted of locking himself in a room for days on end facing off against himself, refused to play after his triumph and was stripped of his title in 1975.

Fischer's paranoia was reinforced in 1981 when his scruffy appearance made him a mistaken suspect in a California bank robbery. In another of his interviews on Filipino radio, Fischer accused the media of trying to "poison the public against me."

By then what was called his idiosyncrasies had completely taken over. He would make extravagant demands over matches in a way that was more commonly seen in boxing. A few years after the Spassky match, he forfeited the title to another Soviet, Anatoly Karpov, when he refused to defend it.

He then fell into obscurity before resurfacing in 1992 to play the exhibition rematch against Boris Spassky on the resort island of Sveti Stefan in Yugoslavia, then in the throes of the Balkan wars. At a press conference he spat on a US government notice warning him he was breaking sanctions imposed on Slobodan Milosevic, then president of Yugoslavia. He went on todefeat Spassky once again, winning more than three million dollars on which he boasted he would never pay tax.

Fischer is not known to have stepped foot since in the United States, where he faced 10 years in prison for playing the chess match.

Cynics said that his theatrics had made him a celebrity. In many ways the tactics which since then have been perfected by the likes of Karpov and Kasparov to unnerve their opponents could well be said to have been invented by him.

But the very same theatrics also succeeded in alienating him from all but a small band of friends and chess enthusiasts. Fischer was a troubled soul, suffering from paranoia. He had a Jewish mother, but was a vocal and vicious anti-Semite, using broadcasts at far-flung radio stations to accuse Jews of everything from his legal woes to an alleged conspiracy to kill off elephants.

And though he became engaged in detention to the head of the Japan Chess Association, Miyoko Watai, she said her fiance hated the Japanese nation and people. 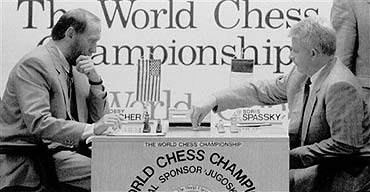 He had faded into reclusive obscurity since that rematch against Spassky in 1992, but 911 once again brought him back into the limelight. He suddenly rang up a Filipino radio station to hail the "wonderful news" of the terrorist attacks and launch a profanity-laden anti-Jewish tirade.

"One can only speculate that his remarks on September 11 so outraged the US administration that the call went out, let's get Bobby Fischer," said David Edmonds, who co-authored a book on the 1972 match, "Bobby Fischer Goes to War."

In one part of the September 11 broadcast, Fischer declared that "nobody has single-handedly done more for the US than me" by making it seem "as an intellectual country."

"But now I'm not useful anymore. You see, the Cold War is over and now they want to wipe me out, get everything I have, put me into prison," he had then said.

"For two years of his life he completely and utterly dominated chess like no one has before," Edmonds said of Fischer.

"I think many in the chess world don't want Bobby Fischer's anti-Semitic and violently anti-American remarks to sully his reputation as one of the greatest chess players of all time."

On July 13, 2004, Fischer was taken into custody at Tokyo's Narita airport for travelling on a passport which Washington said was revoked.

With Japan deliberating for months on whether to send him to the United States, Iceland came to his rescue in 2005, granting him citizenship in tribute to his role in making the island -- and the game of chess -- famous in 1972.

As the United States vowed to arrest him if he ever set foot again in his homeland, Fischer began his new life with typical anti-Jewish slurs and by lambasting his country of origin.

"The Jew-controlled United States is evil. They talk about the axis of evil. What about the allies of evil? What about the US, England, Japan, Australia and so on? These are the evil doers," Fischer would say every now and then.

with inputs from agencies