It is not just about black money. Ramdev's other demands, where he tries to emerge as a spokesperson of native cultures and local languages, need to be debated rather than allowing them to be appropriated for a far-Right agenda 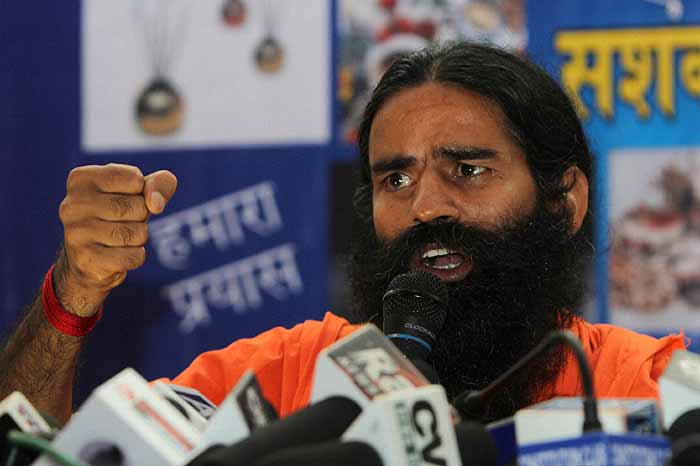 Ramdev has re-entered Delhi and held a press conference again (26 June 2011). He has not spoken like a wounded tiger, but has made some noise on expected lines. The blaring microphone, which had the potential to become his election symbol, has been mostly muted. On the laundry list of Ramdev's demands, only those related to black money and black economy got highlighted, but the ones that aimed at a cultural shift remained simply on record. It is in these unspoken demands that the yoga instructor's ideological predilection lies buried. Therefore, it is important for us to examine and debate them, or else there is a looming danger of conceding them, by default, to the narrow agenda of the far Right. Let me clarify that the demands by themselves are not problematic, but the danger lies in those who are trying to appropriate and spin them to suit their convenience.

A particular caution needs to be applied when Ramdev tries to become a spokesperson for native cultures and local languages. It is very interesting that in Appendix A of his 4 May 2011 letter to the prime minister, he speaks about Mahatma Gandhi and Macaulay. With regard to Gandhi he says:

"To end foreign laws, customs and culture prevailing in the independent Bharat so that every Indian can get economic and social justice, we should follow Mahatma Gandhi’s book named Hind Swaraj mentioning that after independence we need to remove British system and adopt Bhartiya system."

The reference to Macaulay is made this way:

"On the language issue the whole nation is suffering because ninety-nine percent of people do not know English. When countries like Japan, China, France, Germany, Denmark, Russia, etc. educate their citizens in their own language and produce doctors, scientists, engineers, etc. then why we cannot do so in our own national and native languages. Each of our languages has more words than any foreign language... Language of law, justice, science, engineering, medicine, etc. should be in our national or regional languages then only smart kids of poor people will be able to become scientists, doctors and engineers... Why are we given Macaulay’s education system which was created to make Indians as Englishmen?"

I'll return to the Gandhi point later, but first let's look into his Macaulay-grouse. Here, Ramdev is playing on native pride and also, on a prevailing general anxiety that local cultures and languages are facing a grave threat. What seems to be of particular interest to him is that vast numbers ('ninety-nine per cent of people') are excluded. It is true that most of our regional tongues, in a globalised world where English is seen as a vehicle of economic power and success, are leading a clipped and compromised existence. They are either confined to regional literatures, where too their vocabulary is stifled, or to kitchens and drawing rooms. But that said, it is important to ask how does it really help being reactionary in our responses to globalisation? We need to ask if globalisation and migration of human populations is a trend that can be reversed easily? Also, wouldn't we be doing a great disservice to local cultures by pushing them to embrace a shrill xenophobic pitch to meet the existential challenges of their present, which will discredit them in the future? Also, it is a myth that the languages that Ramdev mentions as 'self-contained' (Chinese, Japanese etc.) face no dilemma about their current status and new age capabilities.

The alternative for local cultures does not clearly lie in shutting themselves to the world, but in skilfully negotiating a new place in the world. Many Indian languages have been through this game of repositioning centuries ago when Sanskrit, as a cosmopolitan vernacular, threatened their identities. Strategies of co-existence and shining models of bilingualism have to be aggressively pursued, but all of this has to be guided by liberal streams of thought. If we hurriedly adopt Ramdev's loud theory of supremacy ('each of our languages has more words than any foreign language'), which actually springs from a rather deep inferiority, then, we are putting local cultures at a even higher risk of quicker extinction. The neurotic rage to assert 'birth rights' of these linguistic communities, would only destroy their credibility.

Ramdev also tries to articulate his concerns in the name of the poor ('smart kids of poor people will be able to become scientists, doctors and engineers'). This again is to create a populist appeal. The ground-level demand from the deprived sections of our society is very different. While the Dalits have tried to crown English with the status of a goddess, there is an increasing demand from other backwards and rural folk in various states to introduce English education at the elementary level. They are not seeking English just as a subject, but as a medium of instruction. The Karnataka government, responding to this demand in the last month has kick-started a debate by saying that it intends to start English-medium schools at the 'hobli' level (a cluster of villages is a 'hobli,' a revenue unit). When such is the case, how fair is it for Ramdev to ask the poor of the country to carry the burden of saving local cultures and languages, while the rich follow their chosen paths of free will?

Even as I try to articulate my position on local cultures and languages, I begin to wonder about the seriousness of Ramdev's purpose in the first place. I wonder if there is some mischief behind this. Since when did the ideological Right that believes in one country-one language-one history take up the cause of the local cultures? Is it to primarily mobilise people on the emotion of threatened identities? Is it about trying to sophistically re-apply the formula of India linguistic reorganisation to create unrest? Especially, when the ground-level signs, again, are different. Telengana is trying to break away on a development issue, despite it having been part of a unified Telugu country for fifty years.

As an extension of this argument, I find Ramdev's deployment of Gandhi's militant anti-technology tome, Hind Swaraj also highly suspicious. Why pick this 1909 formative text, which Gandhi wrote at the beginning of his Indian experiment? Didn't Gandhi evolve beyond this text? Also, the 'Bharatiya' spin he gives to the text is a rather stretched interpretation. I am also curious as to why the word 'swadeshi' is avoided in this context — could it just be to avoid the give-away, immediate identification with the Swadeshi Jagran Manch? In all, it seems to be all about distracting people from the central message of the Mahatma's life. The design perhaps is to make him appear like one crazy icon who has no practical applicability to present day life. The far Right seems to be deliberately dropping the name of a man, whose life-message they have repeatedly challenged in both their word and action. Ramdev slips into an ahistorical convenience to invoke a book written a century ago, as if the world has not progressed in the last hundred years. If he was sincere about Gandhi and the spirit of Hind Swaraj, then he should have given up his private jet and before that should have stopped breathing into a microphone. In all, it looks like a mere clever game.

Similarly, his set of concerns on aspects related to agriculture (GM crops, pesticides, land acquisition, seed pricing etc.) are laudable, but one is not sure of his sustained commitment to them. They appear like a mere strategy to seek attention of the masses. It is sad that people like Devinder Sharma tried to make Ramdev a mascot of their struggles. In his blog Sharma curiously saw him as an 'amplifier' of their cause. Given Ramdev's obsession with the microphone that may not be incorrect, but it matters more than anything else as to who holds the microphone. Sharma wrote in his blog:

"At a time when the perfumed class chanted the mantra of development -- by usurping the natural resources and by displacing the millions -- Swami Ramdev talked of empowering the masses. And that is why Shining India in reality hated him, and in lot many ways feared him... I could therefore see in him as an amplifier, someone who could carry the message loudly and clearly. He had the strength to demonstrate that another India is possible. He was keen to help provide viable alternatives."

Bad judgment, should I say?