'The Arrogance Of Power'

Let's remember that's how, as recently as January this year, the SC had described the land allotment made by the then revenue minister of Gujarat, Anandiben Patel. 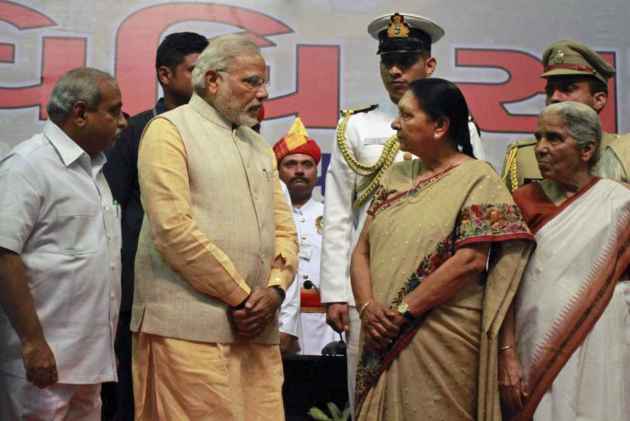 On May 22, Mrs Anandiben Patel took oath as the Chief Minister of Gujarat succeeding Mr Narendra Modi. What has not been highlighted is that this anointment comes soon after the Supreme Court in a judgement (Dipak Babaria & Anr. V State of Gujarat & Ors.) dated January 23, severely indicted her in a land allotment case as the revenue minister of Gujarat

The Gujarat government through its minister Mrs Anandiben Patel allowed the purchase of about 40 acres of land in Kutch district by Indigold Refinery Ltd (IRL) for a consideration of Rs 70 lakhs in 2003. The sale deeds indicated that the buyer had bought the land for industrial purposes. No steps were taken by the buyer to put up any industry on the said land and five years later, it applied to the Collector & Deputy Collector at Bhuj requesting for permission to sell the land to another Company--Alumina Refinery Ltd (ARL) to set up an Alumina refinery. Immediately thereafter, the ARL wrote a letter to the Chief Minister of Gujarat seeking permission to purchase the land. The departmental note clearly states that under the relevant law the buyer of the land should commence the industrial activity within a period of 3 years from date of the certificate of purchase, and within 5 years start the manufacture of goods and provide the services. Where the buyer fails to commence the industrial activity, the Collector has to initiate an enquiry as to whether the buyer has failed to commence industrial activity or production. Thereafter, if on giving the buyer an opportunity to be heard, the Collector comes to a conclusion that the buyer has failed to do so, he has to determine the payment of compensation, and pass an order that the land shall vest in the state government.

According to the above stated law, even the Chief Secretary to the government of Gujarat noted on the file: “We should take back the land. Allotment [to ARL] may be separately examined”. The Supreme Court observed that the minister of revenue Mrs Anandiben Patel thereafter wrote on the file: “Land is of private ownership. As a special case, permission be granted for sale”. The Chief Secretary noted yet again that the government should take back the land and re-allot it to the new party (ARL). But the minister did not budge and replied stating: “As a special case as suggested earlier, permission for sale be given”.

The Supreme Court observed in the Judgement:

“In view of this direction by the minister, the department has, thereafter, taken the decision that the permission be given as a special case but not to be treated as precedent. Thus, the opinion of the Principal Secretary, Land Revenue that 50% of the unearned income be taken by the Government was not accepted. Similarly, the opinion of the Chief Secretary that the land be resumed, and then be re-allotted to the new party was also not accepted.”

This grant of Permission to IRL to sell the land to ARL led to the sale deed between IRL and ARL and subsequently all the permission(s) from the Industries Commissioner were obtained with ease. The Supreme Court further stated in the Judgement:

“In the instant case, the respondent No.4 (IRL) claims to have purchased the land for Rs.70 lakhs. As per the jantri price of the lands at that time, i.e. even at the Government rate in 2008, the land was worth Rs 4.35 crores. The collector was expected to dispose of the land by Auction which is the normal method for disposal of natural resources which are national assets. The Jantri price is an official price. In actual auction the State could have realised greater amount. In permitting the sale inter-se parties, the State exchequer has positively suffered.”

The minister of revenue, Mrs Anandiben Patel did not allow any enquiry by the Collector, Bhuj to take place and proceeded with the completely Arbitrary decision of allowing the sale of land by IRL to ARL and the Supreme Court further held:

“Thus inspite of the Secretaries repeating their advice, the Minister of Revenue Smt. Anandiben Patel has insisted on treating this case as a special case for which she has recorded no justifiable reasons whatsoever, and orders were issued accordingly…

There is nothing in the statutory scheme to suggest that a second sale, inter se parties, after the failure of a purchaser to set up an industry is permissible…

In the present case, the Secretaries had given advice in accordance with the statute and yet the Minister has given a direction to act contrary thereto and permitted the sale which is clearly in breach of the statute…

The minister’s direction as seen from the record clearly indicates an arbitrary exercise of power. The orders passed by the Government cannot therefore be sustained... It is certainly a positive case of a loss of a few crores by the public exchequer by not going for public auction of the concerned property…”

In a scathing indictment of Mrs Anandiben Patel, the Supreme Court further held:

“The Ministers are not expected to act in this manner and therefore, this particular route through the corridors of the Ministry, contrary to the statute, cannot be approved. The present case is clearly one of dereliction of his duties by the Collector and dictation by the Minister, showing nothing but arrogance of power.”

“In the instant case, there were newspaper reports of apprehensions and protest of the adjoining farmers. The Revenue Secretary and the Chief Secretary had placed the statutory provisions on record. It was expected of the Government and the Revenue Minister to take cognizance of these apprehensions of the farmers as well as the statutory provisions brought to her notice by the secretaries. She has simply brushed aside the objections of the secretaries merely because the Chief Minister’s secretary had written a letter, and because she was the minister concerned. While over-ruling the opinion of secretaries to the concerned department, the Minister was expected to give some reasons in support of the view she was taking. No such reason has come on record in her file notings. She has ignored that howsoever high you may be, the law is above you. Development should not be measured merely in terms of growth of gross domestic product, but it should be in terms of utility to the community and the society in general. There is a certain inbuilt wisdom in the statute which is the mandate of the legislature which represents the people. The Minister has clearly failed to pay respect to the same.”

It is indeed shocking and most disappointing that our new Prime Minister, Mr Narendra Modi, despite knowing the outcome of the above judgement, has gone ahead and appointed Mrs Anandiben Patel as the CM of Gujarat. This certainly raises the question whether the new PM will be able to live up to the faith that people have bestowed upon him through this election mandate.

When a minister indicted by the highest court of the land is appointed Chief Minster by the Prime Minister in his own state, can we call it the arrival of  “acchhe din”?

Pavan Bhushan is a law student