'The Backlash Worked For Us'

'With more controversies, Harbhajan became more determined. He is an aggressive, expressive player--someone who fights hard and wins the game. After sometime, we got used to it ... We were enjoying each others' successes...' Something like the above photo is what Sunil Gavaskar had pointed to as one of the contributing reasons behind the young Indian Captain's success.

He allows his players to bask in the glory, Gavaskar had said, pointing to the scenes of the youngsters in the team enjoying themselves with the CB Trophy in front of the television cameras. He steps out of the frame after backing them to the hilt and letting them play their own game, the former Indian captain suggested. He inspires them by the confidence he entrusts in them, literally bestowing them with his own overflowing calm yet exuberant spirit.

When asked, the man himself, described by Gavaskar as a born leader, summed up the tour thus: "This is the best tour I have been on. It cannot get better than this as we played the world's top two teams -- Sri Lanka and Australia -- and then beat them to win convincingly in two successive finals."

But just the other day, the one-day captain and his young team had been under fire after India failed miserably in their one-off Twenty20 game against Australia immediately after the Test series and before the tri-series. Immediate questions had been raised whether the victory in the Twenty20 World Cup last year had only been a flash in the pan.

"After the Twenty20 game pressure was on us, especially on our batting but we improved. We were enjoying each others' successes and this was a very important factor," he said.

"It is a building up stage for my team with most of the young blood in the absence of the seniors," he said, and gave full credit to the youngsters for proving their detractors wrong.

If he had been at the receiving end for packing off seniors such as Saurav, Dravid and Laxman, he was as always full of deference for that one special senior who matters the most, viz. Sachin Tendulkar, who contributed to the team at crucial junctures -- particularly with two big innings when it mattered the most. It literally was a case of cometh the hour and cometh the man, as far as this man went.

Dhoni said he had been a bit concerned about the batting ahead of the Gabba match. "There was a bit of concern with batting and with strike bowler Ishant (Sharma) injured, we were banking on our spinners for the kill," he said. Dhoni also singled out man-of-the-match Pravin Kumar for special praise for his second four-wicket haul. "He's one of the players you should look for in the coming season," he said. 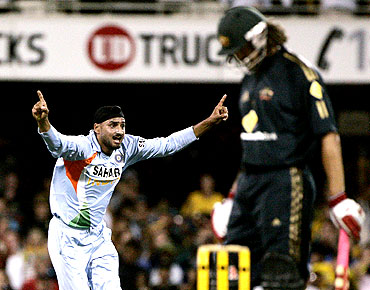 "Sometimes it wasn't clear if it was only Harbhajan or Michael Jackson (they were covering)," Dhoni said when he was asked about the role played by the press.

"Tomorrow we would be gone. They [the press] now need someone to replace him (to keep themselves occupied)," he added.

Dhoni commended Harbhajan for standing up to the pressure and gave a backhanded compliment to the Australian cricketers and media for keeping him fired up.

"As a captain it helped me. More controversies and he became more determined. He is an aggressive, expressive player - someone who fights hard and wins the game.

"The backlash worked for us. After sometime we got used to it. We knew everyday we open the newspaper there would be something.

"The best thing about human beings is that they get used to it. Maybe now in India, I would search the net for what is going on in Australia (now that we wouldn't be here)," he added with an impish smile.

Dhoni, who made a few crucial decisions on the tour, by way of encouraging youngsters as well as playing five specialist bowlers most of the times, explained it thus:

"At certain times, you need to decide whether an extra batsman or an extra bowler would work in your favour. If a batting side is not doing well, you try to keep them down by playing specialist bowlers." 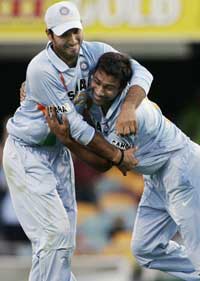 "We wanted to surprise Australia with Piyush Chawla in the finals. He mixes it well, he varies his pace and has a googly which turns on any wicket. He is also very consistent with his line and length. He would become a better bowler with exposure.

"As for Robin, he can do more damage at number six or seven. If he settles down as an opener, he would buy a few more games for himself."

As usual, he refused to take any credit for his side's triumph and had an interesting theory to explain how he managed to remain calm and collected in moments of extreme crisis during the second finals at Gabba. "Everyone is under pressure. If bowlers are trying to do well then even batsmen are trying to finish off the job. By delaying things and taking your time, you are putting extra pressure on them. 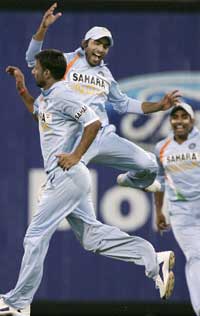 "Captain ka role nahin hota (It's not the captain's role). It's ultimately how your players react under pressure (that matters)."

Dhoni also chose the moment to assert that this would be the core side of an Indian team in coming months.

"This is the core side. We may have more spinners at home and a few new faces might come in but this would be the core."

'Rest is Best for Test'

As for himself, Dhoni was happy to get a few extra days break for himself and openly expressed his worry about the amount of cricket being played.

"I haven't driven a bike for a long time. If the series had gone to the last game, we would've boarded the flight on March 9 and hardly got time for ourselves as there is a meeting on March 17 or 18.

"We need some rest, either you take a break or god gives you the break.

"After all everybody is human and constant cricket can exhaust you in the end. You need time to recover, rest is important. As they say, Rest is Best for Test."

Cinderellas Come To The Party