Despite selective military operations in the FATA and NWFP, there is no indication that Pakistan has any intentions to cut the Taliban's lifeline on its soil. A suicide car bombing in front of the Indian Embassy in Kabul in the morning of July 7, 2008, killed at least 41 persons. The blast destroyed cars and shops outside the building and wounded more than 140 persons, health ministry spokesman Abdullah Fahim disclosed. Unconfirmed reports at the time of writing indicated that the suicide bomber exploded two Embassy vehicles as they were entering the premises.

The highly guarded Embassy is located on a busy street in central Kabul near Afghanistan's Interior ministry. While the outer wall and a security observation post of the Embassy were damaged in the attack, Jayant Prasad, the Indian Ambassador, and his deputy were reportedly not inside the Embassy at the time of the blast. Four Indian nationals were killed in the suicide attack, Ambassador Prasad said. Among those killed were Brigadier R. Mehta, the military attaché, and V. Venkat Rao, an Indian Foreign Service officer who was the Press Councilor, and two Indian paramilitary troopers guarding the Embassy.

India and its role in the reconstruction of a war-ravaged Afghanistan has always been opposed by the establishment in Pakistan, as well as by the Taliban--al Qaeda combine in that country, and threat perceptions at the Kabul Embassy, as well as at the multiplicity of Indian developmental projects in Afghanistan have always been high.

The vulnerability of Indian establishments and presence in Kabul is further augmented by the fact that the Afghan capital is itself highly susceptible to terrorist attacks, including suicide bombings. Indeed, on April 27, 2008, militants had opened fire targeting President Hamid Karzai when he was about to address an annual military parade in Kabul, killing a legislator and two other Afghans.

Over the past few months, the Taliban had vowed to augment their attacks, including suicide bombings, clearly demonstrating an intensification of the militant campaign. Indeed, the attack on the Indian Embassy comes within the context of spiraling violence in the country.

More US and NATO troops were killed in Afghanistan in June 2008 than in any other month since military operations began in the aftermath of 9/11. 45 soldiers, including 27 American, 13 British, two Canadian, one Polish, one Romanian and one Hungarian, were killed during the month. Coalition fatalities in June in Afghanistan, for the first time, exceeded Coalition fatalities in Iraq.

A report by John Holmes, the head of the United Nations Humanitarian Affairs Operations in Afghanistan, stated that the number of documented civilian deaths had increased by 62 percent in the first six months of 2008, compared with the first six months of 2007. The agency had recorded a total of 698 civilian fatalities. The UN "blamed the actions of US, NATO and Afghan government forces for 255 deaths and anti-occupation insurgents for 422."

Reports indicate that Taliban--al Qaeda militants from both Afghanistan and Pakistan are "taking advantage of the summer months to increase operations across the south and east of the country. The number of attacks on US troops in the eastern provinces has increased by 40 percent this year, according to American commander, Major General Jeffrey Schloesser."

Since 2002, the Taliban has demanded the departure of all Indian personnel working on various projects with the Afghan people and government for the rehabilitation and reconstruction of the country. These demands have been backed by targeted actions against Indians. 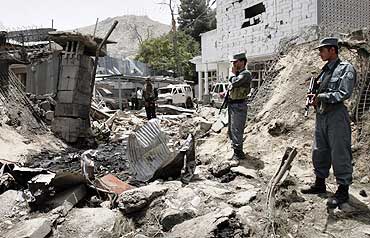 In the most recent of these, before the Embassy bombing, a trooper of the Indo-Tibetan Border Police (ITBP) was killed and four others injured in an attack by the Taliban in the south-west province of Nimroz on June 5, 2008. Two Indian nationals, M.P. Singh and C. Govindaswamy, personnel of the Indian Army’s Border Roads Organisation (BRO), were killed and seven persons, including five BRO personnel, sustained injuries in a suicide-bomb attack in the Nimroz province on April 12, 2008.

Earlier in the first-ever suicide attack on Indians in the country, two ITBP soldiers were killed and five others injured in the Razai village of Nimroz province on January 3, 2008. In April 2006, Indian national, K. Suryanarayana, working with a Gulf-based company, was abducted and later killed by Taliban militants, allegedly on orders from the ISI.

Earlier, Ramankutty Maniyappan, a 36-year old BRO employee, was abducted on November 19, 2005, and his decapitated body was found on a road between Zaranj, capital of Nimroz, and an area called Ghor Ghori, four days later. Following his abduction, Taliban spokesperson Qari Yusuf Ahmadi had claimed that they had given the BRO an ultimatum to leave Afghanistan within 48 hours, failing which they would behead Maniyappan. Nimroz is the location, among others, of the strategic Zarang-Delaram Highway Project under execution by India.

There are approximately 3,000-4,000 Indian nationals working on several reconstruction projects across Afghanistan. The present level of India’s assistance to Afghanistan is USD 750 million, making it the 5th largest bilateral donor after the US, UK, Japan and Germany. According to the Indian Embassy at Kabul, of the total pledge of USD 750 million between 2002 and 2009, the fully committed amount is USD 758.21 million and cumulative disbursement up to 2006-07 has been US $ 278.94 million. This is higher than the disbursement rates of most other countries. The budgetary estimate for 2007-08 is US $ 105.04 million.

The augmenting violence in 2008 compounds distressing trends that had been established in the preceding year. Violence claimed at least 8,000 lives in 2007, the highest death toll for any year since 2001. Armed conflicts between the Taliban, on the one hand, and Afghan and international forces, on the other, left over 1,500 civilians dead in 2007, according to a UN report. Insurgency-related violence "reached unprecedented levels in 2007 with an average of 566 incidents recorded per month, and 160 ‘actual suicide attacks’ throughout the year", according to the report. Writing in the March 2008 Report, UN Secretary-General Ban Ki-moon stated, further,

The Taliban and related armed groups and the drug economy represent fundamental threats to still fragile political, economic and social institutions… Despite tactical successes by national and international military forces, the anti-government elements are far from defeated". Afghanistan’s recovery from the forces of radical Islam is expected to be a long haul, much more than what was imagined even in 2007. Major General David Rodriguez, head of the US-led coalition force, indicated, in February 2008, that it will take "a few years" to defeat the Taliban-led insurgency. Reports indicate that "questions are increasingly being asked concerning the viability and prospects for the ultimate success of the 40-nation ISAF and parallel US military deployments.

The dangers of anarchy within Afghanistan and across areas along the Pakistan-Afghanistan border are predominantly sourced in Pakistan, to a far greater extent than in the debilitated state of Afghanistan. The NATO has said that recent peace deals between the Pakistan government and Taliban have led to increased violence within Afghanistan. NATO officials disclosed in May 2008 that over the preceding three to four weeks, Taliban attacks along Afghanistan's eastern border had increased from 60 to 100 incidents a week. A spokesman for the NATO-led coalition in Kabul claimed that "the spike in insurgent attacks is the result of decreased activity by the Pakistani Army on the Pakistan side of the border."

The Taliban--al Qaeda combine have evidently regrouped rather well, particularly in the Afghan countryside, especially in provinces dominated by the Pashtuns along the Pakistan-Afghanistan border. Islamabad has evidently allowed the combine to regroup on Pakistani territory and to launch attacks across the border. Despite selective military operations in the Federally Administered Tribal Areas (FATA) and North West Frontier province (NWFP), there is no indication that Pakistan has any intentions to cut the Taliban’s lifeline on its soil.

Pakistan’s disastrous deals with the militants and other strategic inconsistencies have amplified the already gigantic terrorist problem in Afghanistan. Despite Pakistan’s own multiple internal convulsions, its capacities for power projection into Afghanistan have not been significantly undermined, and it remains the case that it shares strategic goals with the Taliban in this theatre.

Driven to a wall, President Karzai had recently threatened to send Afghan troops across the border to fight Taliban militants within Pakistan. Accusing Pakistan of sheltering most of the militants involved in recent incidents in the Garmser district of Helmand province, he told a Press Conference on June 15, 2008, that Afghanistan had the right to self-defence and, since militants cross over from Pakistan "to come and kill Afghans and kill coalition troops, it exactly gives us the right to do the same."

In New Delhi, the ministry of external affairs has reiterated India’s determination to continue with its commitments for the development of Afghanistan, and stated that "Such acts of terror will not deter us from fulfilling our commitments to the government and people of Afghanistan." Afghan Foreign Minister Rangeen Dadfar Spanta, who visited the Embassy shortly after the attack, declared, further, "India and Afghanistan have a deep relationship between each other. Such attacks of the enemy will not harm our relations."

It is evident that the Taliban--al Qaeda combine and the transnational jihadi groups based within Pakistan remain the principal instrumentalities of Islamabad’s response to India’s deepening co-operation with Afghanistan, even as ISI-supported terrorist groups remain Pakistan’s principal tool of policy projection in the Indian state of Jammu & Kashmir. Despite its rising internal difficulties and contradictions, the Pakistani establishment’s deep engagement with Islamist extremism and terrorism is far from over.