The Cleric From Canada

While there are unanswered questions about Tahir-ul-Qadri, we should keep our judgement reserved. 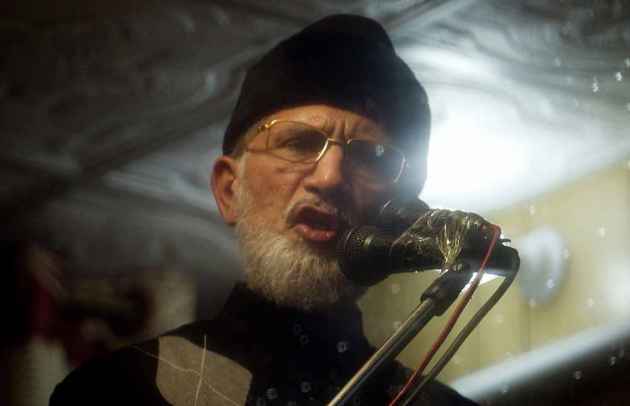 It is difficult to satisfactorily analyse and assess Allama Tahir-ul-Qadri, a Canadian cleric of Pakistani origin, who has suddenly returned to Pakistan to start a street movement against the civilian government and traditional political parties on grounds of widespread corruption and bad governance.

A self-projected Sufi, his rhetoric and methods tend to be confrontational and to be comforting to the Army and the judiciary. He does not call for a return to the Army rule, but wants the Army to have a role in ensuring free and fair elections by being a part of the interim government under which the elections to the National Assembly due later this year will be held.

I do not agree with the conventional perception that his return from Canada to start a street movement was engineered by the Army in order to pave the way for a return to Army rule. I do not tend to see the hand of the Army or its Chief of Staff, Gen Ashfaq Pervez Kayani in the Allama’s street movement.There is little evidence to show that his movement has been inspired by the Army.

At the height of the global war against terrorism, the US and other Western countries sought to use the Allama in their attempts to de-radicalise and de-Wahabise Islam. One does not know to what extent he was able to help them in this exercise. But his advocacy of Sufism and his disapproval of jihadi terrorism and Wahabi-Deobandi rhetoric impressed sections of Western policy-makers.

During his visit to India in the beginning of last year with no difficulty in getting an Indian visa, one noticed a difference from the normal run of Wahabi-Deobandi clerics like Maulana Fazlur Rehman who visit India from Pakistan from time to time. He was allowed to widely travel in India, visiting Delhi, Ahmedabad, Mumbai, Hyderabad and Bengaluru. He complied with restrictions imposed on his meetings such as not referring to Jammu & Kashmir.

Tahir-ul-Qadri at New Delhi, Farewell Speech after his tour of India, on 19 March 2012

One noticed that he spoke of the state of the Islamic world of today and not of the medieval Islamic world. One hardly found references to bin Ladenesque rhetoric on the need for an international jihad against the Crusaders and the Jewish people or the need for the revival of the Islamic Caliphate. The Allama does not fight shy of flaunting his Sufism or his admiration for the positive aspects of the Western world. Look at the way he unhesitatingly addresses audiences in Pakistan in English.

There are two questions to which satisfactory answers are not available. What made him suddenly return to Pakistan to start a street movement? Why has he been praising the Army and condemning the civilian rule?

His pro-Army rhetoric is definitely disquieting, but it would be unwarranted to conclude that the Army would be happy over the emergence of the Allama phenomenon. Both the Army and the jihadi extremists of Pakistan acting as surrogates of its Inter-Services Intelligence ought to be concerned over the Allama phenomenon because of his opposition to jihadi terrorism and his past proximity to Western liberal circles. Even Saudi Arabia, on which he does not seem to be dependent for funding, would be puzzled by the Allama.

His popularity in the streets of Pakistan should not be over-stated, but one cannot deny he has been attracting an increasing number of followers from his native Punjab. Till now, he seems to be a Punjabi phenomenon and not a Pashtun or Sindhi one. His immediate threat is likely to be to the Imran Khan phenomenon and not to the PPP or the Pakistan Muslim League of Mr.Nawaz Sharif. While the elite has remained steadfast with Imran, sections of the poor and middle classes have been gravitating towards the Allama.

Will the Allama phenomenon be ephemeral helped by the widespread disenchantment with the Zardari-led government and fizzle out after some weeks or will it acquire momentum and staying power? It is difficult to say at present, but as long as the movement continues, we in India have to closely monitor its impact on political stability in Pakistan and the state of extremism there.

Pakistani analyses and debates are replete with negative references to the Allama. He has been called by some a serial liar, ideologically dishonest, an Army stooge etc. We should not let these negative references influence our analysis and assessment. We should keep our judgement reserved. If he succeeds in injecting a dose of moderation in Wahabi-Deobandi Islam it will be good for the sub-continent. Our faith in the ability of the Pakistani civil society and political parties to de-Wahabise Islam has been belied so far. If the Allama can do it, why not?