The Come Back Kids

Sreesanth (5-40) turns the match on its head, rocking the cocky South Africans, bundling them out for 84 on a day of astonishing cricket, with useful contributions from Ganguly, Laxman, Zaheer Khan, Kumble and VRV Singh It was clearly a day of reckoning for the come-back kids, and all of them delivered. First Saurav Ganguly hit an unbeaten 51 as his exhilarating last-wicket stand of 44 runs from 35 balls with last man VRV Singh (29 off 26 balls) helped stretch the Indian total to 249— the visitors, starting the day at 156 for 5, added 93 more runs. And then the cocky South Africans were rocked —bundled out for 84, their lowest ever score since readmission to Test cricket It was the first time since 1957 that South Africa were all out for less than a three-figure score. The third lowest total by any team against India also saw South Africa, who went into the match as favourites, concede a lead of 165 runs in the first innings.

Sreesanth was wrecker in chief as he picked up his maiden five-wicket haul of 5-40, well supported by Zaheer Khan and Anil Kumble who claimed two wickets each. But that was not all. The Indians then consolidated their position with some resilient batting,

displayed for the first time on the tour, to reach 146 for five by stumps on the second day — with the help of a pleasing 42 not out by VVS Laxman, India now leads by 311 runs, with fiver wickets remaining.

Virender Sehwag managed 33 which, on a day that saw 20 wickets fall, was equivalent of a strong start. Sourav Ganguly (25) and VVS Laxman (42 batting) built on it with a 58-run stand to extend India's overall lead to 311 runs. Mahendra Singh Dhoni on 17 was with Laxman at stumps. In between, South African all-rounder Shaun Pollock achieved a personal milestone of 400 Test wickets with the scalp of visiting skipper Rahul Dravid (1).

But the turning point of the game was obviously in South African first innings when young Sreesanth bowled a dream spell to take his first five-wicket haul as South Africa were bowled out for 84 in 25-odd overs at the stroke of tea. Sreesanth started the rot with two wickets before lunch break and continued the mayhem in the afternoon session with three more scalps, at one stage reducing the hosts to 45-7. Sreesanth took out Graeme Smith (5) and Hashim Amla (0) in the first session and then struck the body blow to South Africa by claiming Jacques Kallis (12) on resumption. 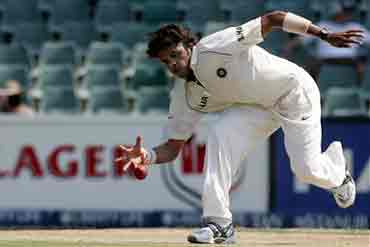 AB de Villiers (6) was shocked by a delivery from Zaheer Khan which rose abruptly and a defensive jab ended in the hands of Virender Sehwag in the gully region. Mark Boucher (5) became Sreesanth's fourth victim when he inside edged a delivery on to his leg-stump and South Africa had five of their top order back in the hut. Shaun Pollock (5) made it a first fiver for Sreesanth as he missed a delivery heading on to his stumps. Sreesanth ended with 5 for 40.

Andre Nel (21) hit some lusty blows to score his highest ever in Tests but the introduction of Anil Kumble into attack ended all pretensions of a fightback. Kumble claimed an obdurate Ashwell Prince (24) who edged a catch behind the stumps and off the very next delivery, Makhaya Ntini found his stumps rattled. Nel then hit one in the deep on the off-side to close the lid on South Africa's first innings, a performance which left the weekend spectators completely shocked.

Earlier, an exhilarating last-wicket stand had stretched the Indian total to 249 in India's first innings. Last man VRV Singh was comical but effective in smashing 29 off 26 balls and put on 44 runs from 35 balls with the irrepressible Sourav Ganguly (51). Ganguly was outstanding in his comeback innings and despite his dour vigil also played several pleasing strokes, including a pulled six off Makhaya Ntini. In all, his unbeaten knock spanned nearly three hours and consumed 101 balls, studded with four fours and a six. Dhoni appeared to get behind the line of the deliveries before an absolutely stunning catch in the outfield sent him back into the dressing room. Dhoni made a cracking off-drive off Ntini and Pollock (4-39) at mid-off threw himself full-stretched to catch the chance inches off the ground.

India's tailenders were then exposed and even though the ball was fairly old, it was too much to expect them to offer much resistance. Kumble was rapped on his body a few times and then tamely edged a catch into the slips. Zaheer Khan chanced his arms and it was good enough for a 17-run ninth wicket stand before Pollock terminated the plucky going. Pollock bowled a slower delivery and found Zaheer (5) in front of the stumps and a couple of deliveries later, had Sreesanth caught at gully for nought. 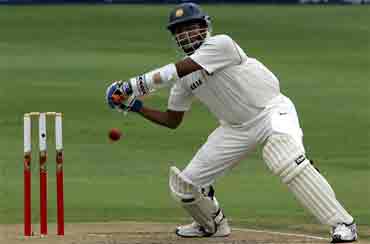 VRV Singh backed away but struck some lusty blows to upset the composure of South African bowlers. He carved out some unexpected fours in the outfield.

End Of The Road?