The Dancer And The Dance

Many eulogies have been written after her death at the ripe age of 94, but Sitara Devi will live on through the hundreds of young girls from “respectable” families who learn Kathak and aspire to perform on stages national and international. 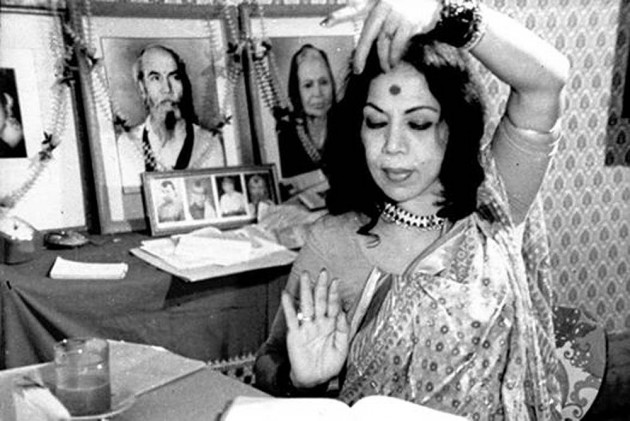 As we enter yet another New Year, it seems to be appropriate to remember a remarkable dancing legend who created an impact on the entire framework of aesthetics, women empowerment, respectability, performance and cultural nationalism— the legendary Sitara Devi (November 8, 1920 - November 25, 2014), who passed away recently in Mumbai at the ripe old age of 94.

It was a cold winter evening in Varanasi in 1996, when I learnt that Sitara Devi— Didi, as she was to all of us young dancers— was in town and was staying in her ancestral home in Kabir Chaura, where most of Kathaks traditionally lived. I called to ask for an appointment and she ordered me to visit her at 7.30 am. I was there on the dot and when the door opened into a dark veranda facing a courtyard, I was a little startled to see, on the dining table, a bottle of whiskey and two used glasses. In the corner, a bulb hung miserably, but below that standing still, in all her stage glory with makeup, costume, ghungaroos, stood Sitara Devi.

“So you have learned from Birju Bhaiya? (Pandit Birju Maharaj) But do you know what my family’s importance is? No! I am sure you do not because all you can see is Birju Bhaiya...”

In the two very long interviews I had with her in Varanasi and then in Delhi, emerged a significant amount of information that would help in comprehending the history of the main classical dance of North India—Kathak.

Sitara Devi was born in the home of traditional performing artists belonging to the community of ‘Kathaks’. The Kathaks are considered Brahmins, but of lower category, they cannot receive daan (gifts), or perform any sacred rituals but are allowed to perform Katha (enacting mythological stories in people’s houses, or temple courtyards), according to the former Mahant (priest) of the Kashi Vishwanath Temple, Varanasi and priest Nankphopha from Gaya.

Sitara Devi’s father Sukhdev Maharaj initiated his three daughters into the performing space when ladies of the stage were always the tawaifs (courtesans) who, after 1857, were perceived not as performers but as mere entertainers, and even prostitutes. However, this bold step was well strategised even at the cost of being ostracized by his own community. Patronage of the stage at that time was confined to the aristocracy or the temple authorities. Sukhdev Maharaj was not backed by any prominent aristocrats and wanted them to achieve recognition in their own right and earn respectability for the profession.

In Kathak dance, until 1950s, majority of performers were the women tawaifs, but the power to transmit the art was with the male gurus. The technical repertoire of the male dancer was significantly different to what tawaifs performed, which was framed within the context of enactment of largely sophisticated sensual poetic imagery through music and multi-layered interpretative language of gestures (abhinaya). The entire objective of the performance of the tawaif was to entrance the clients and earn a livelihood through performance. It may be noted that there was a caste system within the tawaifs and high ranked tawaifs were supreme performers and not prostitutes. Yet they were perceived as such which is why the entry of Sitara and her sisters on stage was a step towards providing the Kathak dance ‘respectability.’

The period between the 1920s and 1940s can be considered as the watershed decades of Indian dance. Several prominent performing arts institutions like Kalakshetra, Sangeet Bharati , Kerala Kalamandalam, Shanti Niketan were established and provided the space for a frenzy of sociological and aesthetic movements in classical dance forms. Both the institutionalisation as well as the remoulding of aesthetics were important markers to the creation of new performers from respectable middle class families who were neither devadasis (temple dancers) nor tawaifs (courtesans), and these trends also contributed to a new phase of cultural nationalism.

The Bhatkhande Music Conference of 1925 saw, for the first time, a dance performance by the Kathak maestro Shambhu Mahharaj. More important, though, was that in the formal pamphlet, the dance— and not the dancer as a representative of a performing caste community— was addressed as Kathak. The formal recognition of the dance and aligning it with a high caste identity was in some ways an assertion for providing the dance the notion of respectability.

In 1945, the first Dance Festival was organized in the Feroz Shah Kotla Ground, Delhi, and was organized by the first secretary of the Sangeet Natak Akademi, Nirmal Joshi. Achhan Maharaj, father of Pandit Birju Maharaj was commissioned to create two dance dramas in Kathak, one was an adaptation of Kalidas’s Sanskrit drama Kumar Shambhav, and the other Braj Leela. Choice of Sanskrit and sacred dramas was again an attempt towards creation of Kathak as a respectable dance that was aligned to the classical language Sanskrit and to the sacred Vaishnav realm and, in the process, Kathak, it was hoped would gain a respectable status far removed from the world of tawaifs.

At this time, Sitara Devi’s appearance on the stage was almost revolutionary. And it is in this context and the context of reclaiming cultural space that fitted into a larger framework of reconstructed, respected aspect of Cultural Nationalism that we should situate her. Many eulogies have been written after her death at the ripe age of 94, but Sitara Devi will live on through the hundreds of young girls from “respectable” families who learn Kathak and aspire to perform on stages national and international.

Sitara Devi's personal imprint on the actual performance of Kathak will always be that of a performer who gave the audience a glimpse of liberation, where she abandoned and transcended the body while performing, which made the maestro Pandit Birju Maharaj tell me, “If there is one woman who goes beyond the woman’s body and dances like a man, it is Sitara!” It reminds me of what the 13th century Sufi Saint Hazrat Nizamuddin said of an extremely powerful woman Sufi saint of Delhi, Hazrat Bibi Fatima Sam, “When a lion emerges out of the forest, nobody asks if it is male or female.”

Sitara went much beyond from the time in which she was born, she evolved as a completely de-institutionalized woman who, through her bold energy, asserted herself on the contemporary stage. She redefined the mould of the traditional woman performer. While on stage, she combined the male and female energies, vigorous and bold to the extent of defiance, completely without shame but covered in the intoxication of sacred pulses. A woman in whose body collapsed various rhythms of time and history, that one could recall Yeats' famed lines:

Labour is blossoming or dancing where
The body is not bruised to pleasure soul.
Nor beauty born out of its own despair,
Nor blear-eyed wisdom out of midnight oil.
O chestnut-tree, great-rooted blossomer,
Are you the leaf, the blossom or the bole?
O body swayed to music, O brightening glance,
How can we know the dancer from the dance?

Yes, one can hear her soul still dancing somewhere in the sky above.