Home  »  Website  »  Society  » Reportage  »  The Dying Art: Life Of These ‘Well Of Death’ Stuntmen Is Always On Edge
Reportage

The Dying Art: Life Of These ‘Well Of Death’ Stuntmen Is Always On Edge 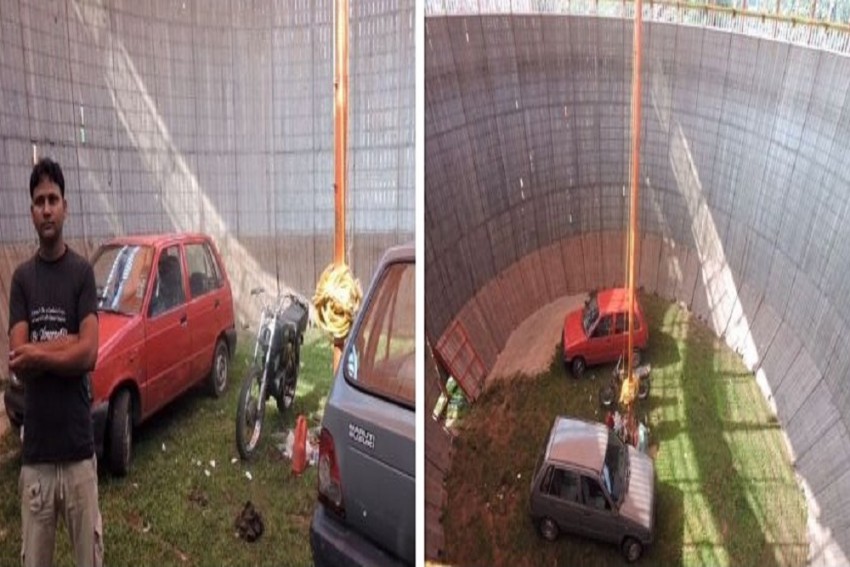 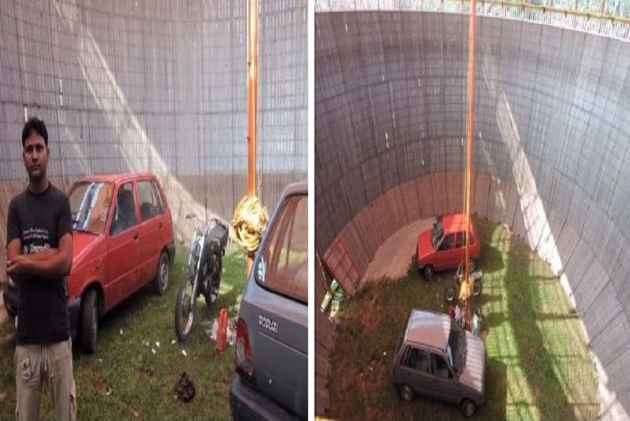 Lying down in a temporary tent right next to "Well of Death", also known as “Maut Ka Kuan, set up at a ground in West Bengal’s Siliguri, Inamul Ansari clicks a selfie and quickly sends it to his mother after another thrilling show last night. His mother has been unhappy with his work because of the amount of risk involved in it. She is also worried ever since she heard the news of a stuntwoman in Maharashtra being critically injured during a well of death performance. But Ansari doesn’t take the incident seriously.
The 27-year-old stuntman, however, admits that his life is on the edge every time he slips inside his Maruti 800 car and drives into Gudia Maruti Circus’ 25-feet barrel-shaped wooden cylinder made of timber. For Ansari and his 25-member team, the last few days in Siliguri has been busy on the occasion of Durga Puja. Amid a pulsating crowd, Ansari and four other stuntmen – one of them on a bike and the rest in another car – as they defy gravity and death to race around the vertical walls of the "well", which is around 12 metres in diameter.

“I have seen the Maharashtra incident video on TV. It’s nothing new. Accidents do occur, but it is generally safe. Waise bhi maut to kahi bhi ho sakti hai, (death can come anytime), even while driving on road,” says Ansari, a resident of Jari village in Ranchi district.

On September 25, stuntwoman Shivani Gajbia, 19, suffered serious injuries inside a silodrome at a fair near Kalyan. Gajbia was performing a stunt with Shehjad Ahmed’s car when he rammed the vehicle into her. She was admitted in ICU at a private hospital; her condition is stable. Well of Death is considered as one of the world's most exciting motor stunts because, despite “mandatory” helmet instruction, most performers in India opt not to wear any shields other safeguards.

“The manager has provided helmets and gloves, but we don’t wear them. It spoils the look,” says stunt biker Sajid Ansari, who has been challenging gravity and death for Rs 1,000 a day for the past 5-6 years. The Bihar lad had followed his uncle to the profession.

“What will I do? I am uneducated. My family runs a small shop in the village but the money is not enough,” says 30-year-old Sajid, who had joined the group at a young age. These riders earn anywhere between Rs15,000 to Rs20,000  per month for performing the acrobats, while the actual show of full blazing lights and action cost the audience just Rs30.
According to Sajid, speed is crucial in this game. He maintains 40-45kmph speed inside the well. “The trick is to maintain the right speed and remain alert. Once you rev the bike, it is the roar of the engine that does the trick. The vehicles are not pinned to the wall, but held in place by centripetal force which allows the bikes to follow a curved path, similar to loop-the-loop in a rollercoaster. Rest is easy,” he shares.

Only, it often doesn’t end well. Last year, Ansari had slipped and broken a limb during a show. “Such accidents happen. But I have never seen anyone lose life,” he says. He had initially joined the group as a technician around seven years ago. Within a year, he realised that his first love was daredevilry and he started learning car stunts. “I have been driving Maruti 800 for the last five years. Moving in circles, parallel to the ground –sometimes, often standing, hands-free, saluting and waving—can be dangerous, but that is what the game all about. That is why this show excites me and the audience,” adds Ansari.
He, however, laments that the stuntmen do not get any insurance in case of an accident.
“Everything is dependent on the whims of the troupe owner. Generally, he pays for the treatment of the victim, but what if he does not?” he asks.

In 2011, the Delhi High Court banned Maut ka Kuan shows in the national capital, while hearing a petition filed by a mela organiser Dalbir Malik.

“There are chances of the vehicles falling inside the well resulting in an explosion which is dangerous to the life of spectators as well as the rider. The Motor Cycle/Car (engines) used in such performances are modified which makes a lot of noise pollution,” the court observed.
In the last 30 years, the Gudia Maruti Circus has been performing across the eastern belt of India, in cities and villages of West Bengal, Bihar, Jharkhand, Odisha, Meghalaya and Assam. The company had last performed in Malda, West Bengal, where they suffered severe damage due to the flood.

“Like me, most stuntmen start their training following their seniors. I underwent training sessions for around five months. Balancing the body and the vehicle is crucial,” says Ansari.
There are approximately 500 performers across the country with mostly hailing from Uttar Pradesh, Bihar, Jharkhand, Haryana and Madhya Pradesh. According to Sajid, there are around 20-25 well of death organisers. But poor turnout and technological advancement are slowly killing the decade-old game.