'The Epitome Of Simplicity'

Kamala Markandaya chose to live a very cloistered existence, shunning the press or public interest and caring little for scholarly opinion of her work. Given the mystique that surrounded her life, I consider myself deeply privileged to have had the o 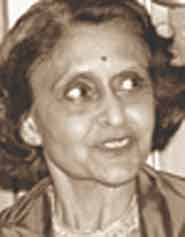 The death of Indo-British novelist Kamala Markandaya at the age of 80 on May 16, 2004, did not come as a shock to me though my acceptance of the news was accompanied by deep sadness.  I was aware that Markandaya had been ailing for several years. What began as frequent migraine attacks, about which she had complained to me in 2001 and which had rendered her largely home-bound, ended up in a series of ailments that ultimately took her life.

And what a productive life it had been! Born in a small town in Mysore in 1924, Markandaya married an Englishman, Bertrand Taylor, and emigrated to England in 1948 where she spent the rest of her life and raised her only child, a daughter named Kim Oliver. Within a few years of her arrival in the West, she published her first novel, Nectar in a Sieve which became an international bestseller that was translated into several languages.

With the success of her very first novel, Markandaya achieved a loyal readership, was lauded for her acute insights into the lives of Indian peasantry (gleaned, in fact, from her own 18-month "experiment in rural living" when she had actually lived among the villagers), and was inspired to continue to write novels that explored the complex, complicated relationships between India and the West.

She belonged to what one might term the first generation of Indian women novelists who tackled the problems of exile and immigrant angst, diasporic discomfort and racial tension, inter-racial relationships and the demise of Indian royalty. Her deep love for Indian history was reflected in the themes she chose to explore through the ten novels she produced over a thirty year long creative life. In particular, her works straddled the divide between the demise of the British Raj and the emergence in India of post-colonial attitudes towards progress. Based frequently upon her own experiences and observations of life in India and the West, Markandaya'a novels are highly autobiographical

Known as much for her reclusive nature as for her literary talent, Markandaya chose to live a very cloistered existence in Dulwich in Central London, shunning the press or public interest and caring little for scholarly opinion of her work. Given the mystique that surrounded her life, I consider myself deeply privileged to have had the opportunity to work directly with this distinguished woman in London through a British Council Visitor's Grant. While stationed at Exeter College, University of Oxford, where I was researching English in India and Markandaya's novels in particular, I had the rare chance of interviewing her, discussing the more problematic aspects of her novels and receiving permission from her to use quotes from our interviews in my subsequent book of literary criticism in which I closely examined aspects of "Indianness" in her writing.

She revealed to me that she had made an exception in my case because she had been a recipient of British Council largesse herself on first arriving in England and saw the opportunity to work with me as a means of repaying the Council's generosity to her. I, of course, was delighted at her willingness to give me freely of her time and insights. I will never forget the High Tea to which she treated me at Fortnum and Mason in London, upon the conclusion of my research in 1987.

She was a petite woman, soft-spoken and refined, with a clipped Oxbridge accent. Clad in a traditional Indian silk sari and sporting a small red bindi on her forehead, she was the epitome of simplicity. We stayed in touch over the years through letters and phone conversations but she remained firm in her resolve to resist requests for any further meetings with scholars or writers.

Markandaya's novels are prescribed frequently in the USA on courses that cover South Asian Civilization. My own courses taught at New York University frequently feature her work. My American students are always profoundly moved by the poignant accounts of poverty and struggle embodied in her writing that never degenerate into a depressing view of Indian peasant life but are often uplifting accounts of mankind's struggle over adversity. Though she shunned the limelight, her work spoke for itself and has ensured for her a very special place in South Asian Writing in English.

Dr. Rochelle Almeida is the author of  Originality and Imitation: Indianness in the Novels of Kamala Markandaya (Rawat, Jaipur, India, 2000)