The Gateway Of India

By mid-September, Indian agencies knew that the attack would come from the sea, by mid-November, they knew that the Taj hotel would be targeted... And yet... and yet... A blow by blow account of how the plan to attack Mumbai by sea was hatched and ex In mid-September this year, the CIA station chief in Delhi sought an urgent meeting with his counterpart in R&AW to pass on some critical inputs. This was part of an understanding that Indian and American intelligence had institutionalised in the aftermath of 9/11. From its assets in Pakistan and Afghanistan, American intelligence had come to learn that the Lashkar-e-Toiba was planning to launch a major terrorist attack in Mumbai, which would be carried out from the sea.

This input was in conjunction with other inputs that Indian intelligence had received from various other sources.  For instance, Riyasuddin, the son of Maulana Nasiruddin, who was under arrest for his alleged involvement in the assassination of the then Gujarat home minister Naren Pandya, had stated in his statements to the police that a sea-borne attack was being planned by certain terrorist groups abroad for an attack on Mumbai.

Similarly other vague inputs had also come in from Uttar Pradesh as well as other sources. But by September 24, Indian intelligence picked up several specific inputs. These were:
By the middle of November, as Indian intelligence continued to check out further inputs, the pieces of an intricate jigsaw puzzle began to fall into place. Sources say they learnt that the attack would come from the sea and that the Taj Hotel would be a major target. However, it was not known whether this attack would be carried out by planting bombs in the hotel or by terrorists carrying small arms. Indian intelligence assessments were tilting towards bombs being planted and security at the hotel was beefed up accordingly to prevent terrorists from planting bombs inside the premises.

On November 18, R&AW passed on a specific advisory to the Coast Guard, which serves as the Lead intelligence Agency for the coastal area. The advisory asked the coast guard to intensify patrolling and look out for a suspicious vessel, probably of Pakistani origin, which had sailed off from Karachi. While the coast guard began to patrol the area with renewed intensity, the terrorists had an entirely different plan.

According to details available with Indian intelligence and the information given by the terrorist who was picked up by the Mumbai police in an encounter near Chowpatty, the terrorists hijacked an Indian fishing boat, the Kuber, somewhere near Pakistani waters. They beheaded the majority of the boat's crew of six and only allowed one crew-member, Amarsinh Solanki, to live so that he could help them with navigating the boat to Mumbai.  The coast guard found a Global Positioning System abandoned on the fishing trawler that was drifting nearly four nautical miles off the coast of Mumbai early on Thursday, November 27 morning, several hours after the terrorist attack began. While the coast guard was looking for a Pakistani or unidentified vessel, the Kuber (registration number 2303) blended in with the thousands of registered Indian fishing vessels out at sea.

This enabled the terrorists to avoid detection and slip into Badhwar park in Cuffe Parade in Mumbai before they began their operations. Most of them got into waiting boats that had been arranged by Karachi-based underworld don Dawood Ibrahim's diesel smuggling network in Mumbai. Arms, ammunition and plastic explosives were quickly transferred to the waiting boats that took the terrorists to the Gateway of India which was the pre-arranged launching pad for the terrorist attack.

What has surprised investigators piecing together the details of the attack is that the GPS recovered from the abandoned trawler, Kuber, had two maps fed into it to aid navigation. One was a route from Karachi that was plotted quite close to the Indian coast, while a return route had also been mapped into the GPS from the Mumbai coast back to Karachi. "We think this was done to give the terrorists some semblance of hope that they would go back home after a successful raid," a top security official told Outlook. The fact that these two maps were fed into the GPS has confirmed that there was some help from people with a naval or army background, and had extensive knowledge of navigation at sea. 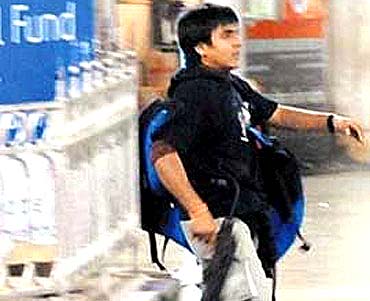 What security officials have also confirmed is the fact that most of the terrorists were from Punjab in Pakistan. The arrested terrorist, Azmal Amir Qasab, a resident of Chippalpura Taluka in Ukkad Zilla, Punjab, Pakistan has told his interrogators that the terrorists had trained for over two months, much of it on the Karachi coast for the naval leg.  They were trained in basic rudiments of conducting naval commando raids, given extensive biefings on the layout of South Mumbai with adequate footage for familiarity and CDs of alleged "atrocities" carried out against Muslims in India. Qasab has also given details of how two of their operatives checked into the Taj Hotel last Saturday, November 22, with a lot of equipment. The duo received several visitors with huge bags, apparently carrying RDX for the two IEDs which were defused by the Mumbai police on the night of the first attack.

Meanwhile, investigators are poring through the call data details downloaded from the satellite phone also recovered from the abandoned trawler. Many of the call details have revealed numbers that have been traced back to the LeT's chief of operations, Muzamil, as well as to Lakhvi. Interestingly, the international SIM cards recovered from the bodies of the killed terrorists correspond to the intelligence picked up earlier, when Muzamil had asked his Bangladesh operative Yayah, to procure them. He apparently also procured the fake Mauritian identity card recovered by the marine commandos.

Top security sources have also told Outlook that the intercepts made by the intelligence agencies while the NSG commando assault was underway clearly indicates that the terrorists were speaking to their handlers in Pakistan. Among the instructions passed on to them during the nearly 62-hour crisis were to throw grenades indiscriminately if they were in danger of being overpowered and to start fake negotiations to prolong the crisis. In fact, two such attempts at negotiations were made at Nariman Bhawan and the Oberoi-Trident hotel to stave off an impending assault, even though the terrorists had already killed the hostages.

In the days to come investigators will have to continue putting the pieces of the puzzle together to create a more comprehensive picture of the attack. Hidden among them will be key lessons on how to prevent similar attacks in the future.