The Ghost Of Blair

Blair changed the face of British politics by rescuing his party from the extreme left. Cameron, if he gets elected, would have done the same by loosening the grip of extreme right on his party’s agenda. 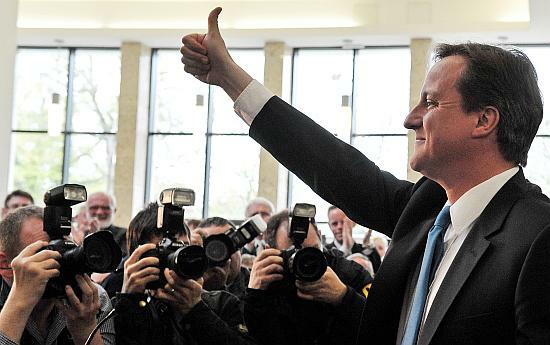 If the latest opinion polls are anything to go by, then David Cameron might be in 10 Downing Street tomorrow and Gordon Brown would be thinking of writing his autobiography. Though the polls seem to be going down to the wire, the Conservatives seem set to emerge as the single largest party in the British Parliament. And it is showing in the growing confidence that Cameron is displaying and the disarray that has bedevilled the Labour Party rank and file. Cameron recently wrote: “What a shrunken figure Gordon Brown now cuts. Once hailed as an economic colossus and political genius, he resorts to desperate smears and hysterical scares as he tries to cling on to the keys of Number 10.”

It is indeed true that a man who so desperately wanted to be the Prime Minister of Great Britain got his wish only to be shown the door in less than three years by the British public. The one aspect about British polity that this election absolutely makes clear is the dislike that the figure of Gordon Brown generates among ordinary Britons. And despite the attempt by Britain to get over Tony Blair what is also clear is the dominance of this much maligned political figure. Blair looms large over these elections even though he is nowhere to be seen. He looms large in the absence of leadership in the Labour Party rank and file. He looms large in the way Cameron has redefined what it means to be a Tory in contemporary Britain. He looms large in the way the newest kid on the block, Nick Clegg, the leader of the Liberal Democrats, has caught the attention of those who are fed up with politics as usual.

Cameron, in particular, has made no secret of his admiration for Tony Blair. He has accepted that he was as excited by the arrival of Blair to power as the Labour Party supporters. His attempt to shift the priorities of the Conservative Party to the centre is straight out of Blair’s rule book. Blair changed the face of British politics by rescuing his party from the extreme left. Cameron, if he gets elected, would have done the same by loosening the grip of extreme right on his party’s agenda.

Cameron’s central intellectual and political philosophy has underlined the need to rescue what he calls as the “broken society” in Britain. His country, according to Cameron, is suffering a devastating crisis of authority, leading to a dangerous public contempt for politics. The only way trust can be restored in politics is from the local community on up. The task for conservatism then is to restore and create human associations and elevate “society and the people who form it to their proper central and sovereign nation.”

This is politics on a grand scale, something we are not accustomed to witnessing in today’s sound-byte culture. This is also very risky: it is not entirely clear if the British public will easily comprehend a seemingly complex intellectual argument. But it is also mightily interesting. Though Brown has complained that policy issues are not being discussed by the media and his opposition, Cameron has redefined the very parameters of this political debate. The Tories have a meta narrative from which their specific policies on economy, immigration, health etc emerge. The Labour Party has a range of policies sans any larger coherence.

At a time when the British public is overwhelmingly sceptical and wary of the promises of the politicians, Cameron is promising to take power away from the politicians and put it in the hands of people. Cameron’s progressive conservatism is a mix of Edmund Burke and Alexander Hamilton. A la Burke it reminds people that the world is infinitely more complex than we can know and therefore scepticism should be the norm when handing too much power to the government. Yet, a la Hamilton it is optimistic that limited but purposeful government intervention can indeed enhance opportunities and social mobility.

Cameron has by no means won the argument and even if he wins there is no guarantee that he will have enough votes in the Parliament to activate his agenda. But what he has indeed done is to bring the Tories back from oblivion to the centre of British politics and reminded us that ideas do have a place in politics. Britain wants change desperately but it remains unsure which direction to take. Cameron is hoping that his countrymen and women will accept his pitch and give him a mandate that will allow him to actualise his contract with the voters of bring public and politicians together to serve the needs of a nation in crisis.