The Golden Arches Theory of Decline

Why is there a worldwide revolt against politics as usual? Because corporate globalisation has crushed democratic choice. 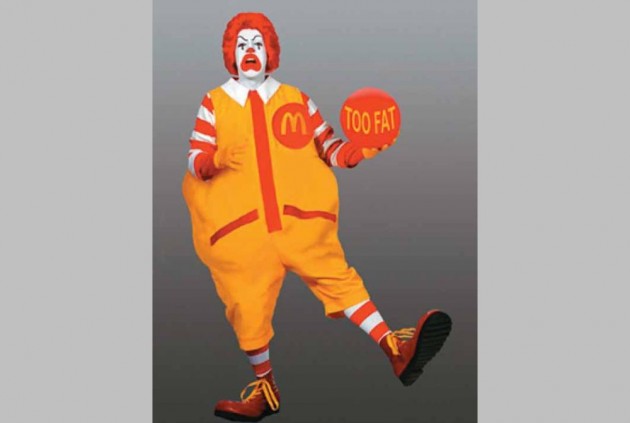 A wave of revulsion rolls around the world. Approval ratings for incumbent leaders are everywhere collapsing. Symbols, slogans and sensation trump facts and nuanced argument. One in six Americans now believes that military rule would be a good idea. From all this I draw the following, peculiar conclusion: no country with a McDonald’s can remain a democracy.

Twenty years ago, the New York Times columnist Thomas Friedman proposed his “golden arches theory of conflict prevention”. This holds that “no two countries that both have McDonald’s have ever fought a war against each other since they each got their McDonald’s”.

Friedman’s was one of several end-of-history narratives suggesting that global capitalism would lead to permanent peace. He claimed that it might create “a tip-over point at which a country, by integrating with the global economy, opening itself up to foreign investment and empowering its consumers, permanently restricts its capacity for troublemaking and promotes gradual democratization and widening peace.” He didn’t mean that McDonald’s ends war, but that its arrival in a nation symbolised the transition.

In using McDonalds as shorthand for the forces tearing democracy apart, I am, like him, writing figuratively. I do not mean that the presence of the burger chain itself is the cause of the decline of open, democratic societies (though it has played its part in Britain, using our defamation laws against its critics). Nor do I mean that countries hosting McDonald’s will necessarily mutate into dictatorships.

What I mean is that, under the onslaught of the placeless, transnational capital McDonald’s exemplifies, democracy as a living system withers and dies. The old forms and forums still exist – parliaments and congresses remain standing – but the power they once contained seeps away, re-emerging where we can no longer reach it.

The political power that should belong to us has flitted into confidential meetings with the lobbyists and donors who establish the limits of debate and action. It has slipped into the dictats of the IMF and the European Central Bank, which respond not to the people but to the financial sector. It has been transported, under armed guard, into the icy fastness of Davos, where Mr Friedman finds himself so warmly welcomed (even when he’s talking cobblers).

Above all, the power that should belong to the people is being crushed by international treaty. Contracts such as NAFTA, CETA, the proposed TransPacific Partnership and Trade in Services Agreement and the failed Transatlantic Trade and Investment Partnership are crafted behind closed doors in discussions dominated by corporate lobbyists. They are able to slip in clauses that no informed electorate would ever approve, such as the establishment of opaque offshore tribunals, through which corporations can bypass national courts, challenge national laws and demand compensation for the results of democratic decisions.

These treaties limit the scope of politics, prevent states from changing social outcomes and drive down labour rights, consumer protection, financial regulation and the quality of neighbourhoods. They make a mockery of sovereignty. Anyone who forgets that striking them down was one of Donald Trump’s main promises will fail to understand why people were prepared to risk so much in electing him.

At the national level too, the McDonalds model destroys meaningful democracy. Democracy depends on a reciprocal sense of belief, trust and belonging: the conviction that you belong to the nation and the nation belongs to you. The McDonalds model, by rooting out attachment, could not have been better designed to erase that perception.

As Tom Wolfe observes in his novel A Man in Full, “the only way you could tell you were leaving one community and entering another was when the franchise chains started repeating and you spotted another 7-Eleven, another Wendy’s, another Costco, another Home Depot.” The alienation and anomie this destruction of place promotes are enhanced by the casualisation of labour and a spirit-crushing regime of monitoring, quantification and assessment (at which McDonald’s happens to excel). Public health disasters contribute to the sense of rupture. After falling for decades, for example, death rates among middle-aged white Americans are now rising. Among the likely causes are obesity and diabetes, opioid addiction and liver failure, diseases whose vectors are corporations.

Corporations, released from democratic constraints, drive us towards climate breakdown, an urgent threat to global peace. McDonald’s has done more than its fair share: beef production is among the most powerful causes of climate change.

In his book The Globalisation Paradox, the Harvard economist Dani Rodrik describes a political trilemma. Democracy, national sovereignty and hyperglobalisation, he argues, are mutually incompatible. You cannot have all three at once. McDonalisation crowds out domestic politics. Incoherent and dangerous as it often is, the global backlash against mainstream politicians is, at heart, an attempt to reassert national sovereignty against the forces of undemocratic globalisation.

An article about the history of the Democratic party by Matt Stoller in The Atlantic reminds us that a similar choice was articulated by the great American jurist Louis Brandeis. “We may have democracy, or we may have wealth concentrated in the hands of a few, but we can’t have both.” In 1936, the congressman Wright Patman managed to pass a bill against the concentration of corporate power. Among his targets was A&P, the giant chainstore of his day, that was hollowing out towns, destroying local retailers and turning “independent tradesmen into clerks”.

In 1938, President Roosevelt warned that “the liberty of a democracy is not safe if the people tolerate the growth of private power to a point where it becomes stronger than their democratic state itself. That, in its essence, is fascism.” The Democrats saw concentrated corporate power as a form of dictatorship. They broke up giant banks and businesses and chained the chainstores. What Roosevelt, Brandeis and Patman knew has been forgotten by those in power, including powerful journalists. But not by the victims of this system.

One of the answers to Trump, Putin, Orban, Erdogan, Salvini, Duterte, Le Pen, Farage and the politics they represent is to rescue democracy from transnational corporations. It is to defend the crucial political unit that’s under assault by banks, monopolies and chainstores: community. It is to recognise that there is no greater hazard to peace between nations than a corporate model which crushes democratic choice.

George Joshua Richard Monbiot is a British writer, acclaimed for his environmental and political activism.

The article has been cross-posted with www.monbiot.com