The one bond that unites most is the army, in which all of them (except the orthodox and the Arabs) serve together. 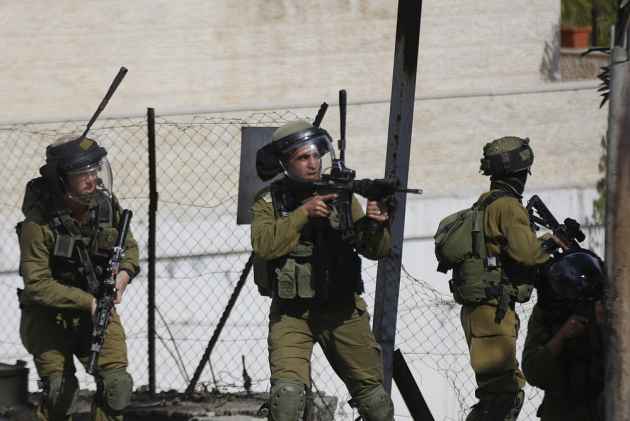 I went to the seashore for the first time since my operation three weeks ago. A five minute walk from my home.

I was sipping a cup of "americano" coffee, thinking that all was well with the best of all possible words.

BUT OF course it wasn't. In fact, all was wrong with the worst of all possible worlds.

True, beyond the blue sea, in faraway Paris, the largest assembly ever of world leaders was deliberating on how to save the planet from climate disaster. Our own Binyamin Netanyahu was there with a huge delegation, though most Israelis, including Netanyahu, have only contempt for the issue, which they consider a phony problem for pampered countries which have no real problems, as we have aplenty.

He went there only to shake hands and have his picture taken shaking the hands of all the world's great leaders, including Arabs, giving the lie to all those who bemoan Israel's growing isolation in the world.

But all this was sham. Israel, the country I love, is in grave danger. Actually, it is in more dangers than one.

LOOKING OUT at the sea, I thought about the three great dangers I perceive, and which I could not forget even in hospital.

First, there is the danger of Israel becoming an apartheid state (which is already the situation in the occupied Palestinian territories.)

Sooner or later, the imaginary border between Israel and "the territories" will completely disappear. It still exists in legal terms. For how long?

Between the Mediterranean Sea and the Jordan River there live Israeli Jews and Palestinian Arabs in more or less equal numbers — some 6.5 million each. This will be an apartheid state in the worst meaning of the word.

If Israel may eventually be compelled to grant equal rights to the Arab inhabitants, such as the right to vote (something that seems far-far away) this will be a state of perpetual civil war. These two peoples have nothing in common — socially, culturally, religiously, economically — except their mutual hatred.

The second danger is symbolized by Daesh (or IS/ISIL/ISIS). All the neighboring states may unite under the black banner of Allah, and turn against us. It happened 900 years ago, when the great Salah-ad-Din (Saladin) united the Arab world against the Crusaders and threw them into the sea. (Saladin himself was no Arab, but a Kurd from Northern Iraq.)

Waiting for this eventuality, Israel will remain armed to the teeth, with nuclear bombs galore, becoming more and more militarized, Spartanized, religiously fanatical, a Jewish mirror image of the Islamic Khaliphate.

The third danger may be the worst: that growing numbers of young, well-educated, talented Israelis will emigrate to the US and Germany, leaving behind the less-educated, more primitive, less productive population. This is already happening. Almost all of my friends have sons and daughters living abroad.

By the way, distance seems to increase "patriotism" — indeed, Netanyahu is working now to confer voting right on Israelis living permanently abroad, obviously believing that most of them will vote for the extreme right.

And what about the future of the globe? To hell with it.

VERY FEW people talk about these dangers. They silently agree that "there are no solutions". So why "break our heads" about them?

But there is another danger, about which everybody talks endlessly: the breaking apart of Israeli society.

When I was young, before the birth of the State of Israel, we were determined to create a new society, indeed a new nation, a new Hebrew nation. We shunned the appellation "Jewish", because we were different from world Jewry — earthbound, territorial, national.

We consciously celebrated the "Sabra" prototype. Sabra is the Hebrew word for the cactus plant, which we considered native to our country (though actually an immigrant from Mexico). The appellation was given to the new generation born in the country. The Sabra was supposed to be practical, matter-of-fact, far from Jewish sophistry. Unconsciously we assumed that the new type was Ashkenazi, blue-eyed, of European descent.

Under this banner we created what we considered a new Hebrew culture. This culture consisted, for us, not only of literature, poetry, music and such, but also of military and civilian norms, everything.

There was a lot of conceit in this, but we were proud of creating something completely new. It helped us to stand on our own feet, win (albeit barely) the 1948 war and found the state.

We brought in a huge wave of new immigrants, and that's where the trouble started. At the "outbreak of the state", as we say jokingly in Hebrew, we were around 650,000 souls. In a short time, we brought in more than a million new immigrants — not only the remnants of the Holocaust in Europe but also almost all the Jews from Muslim countries.

Those who hesitated were helped along. In Iraq, Israeli secret agents planted bombs in some synagogues to convince the Jews that they must leave.

We expected the new immigrants to become like us, if not immediately, then in a generation. It did not happen. The "orientals" had their own culture and traditions, they had no desire at all to become "Sabras".

The hope of people like David Ben-Gurion that the problem would solve itself within a few years came to nought. It didn't. On the contrary, resentment and mutual antipathy grew with time. Today, a third and fourth generation is conscious of it more than ever.

THEN THERE is the "national-religious" camp, those who wear knitted kippahs.

When the state broke out, everyone expected religion to die out. Hebrew nationalism had taken over, the Jewish religion belongs to the Diaspora and will disappear in this country together with the old people who still cling to it. They were treated with benign contempt.

The opposite happened. After the 1967 war, which brought Israeli soldiers to the ancient biblical sites, religion revived in leaps and bounds. It created the settlers' movement, took hold of the rightist camp, and is now a dominant force in Israeli life and politics, slowly taking hold of the all-powerful army.

The "knitted ones", as we call them, are distinct from the Orthodox, a separate population living in their closed quarters, wearing black hats and clothes. They reject Zionism altogether but use their electoral power to compel the state to support their innumerable children.

After the breakdown of the Soviet Union, a huge wave of Russian Jewish immigrants reached the country. Every fifth or so Israeli is now a "Russian" (including all former Soviet countries). Most of them detest everything that smells of socialism or leftism and tend to be extremely rightist, nationalistic and even racist.

All these in addition to the 20% or so of Israeli citizens who are Arabs — belonging and not belonging, more integrated than many of them realize, but considered enemies by many. The call "Death to the Arabs" is routinely chanted at soccer matches.

The dream of a unified, homogeneous new Hebrew nation is long dead. Israel is now a very heterogeneous country, rather like a federation of separate "sectors", who don't like each other very much: Ashkenazis, Orientals, National-religious, Orthodox, "Russians" and Arabs, with many subdivisions.

The one bond that unites most of these sectors is the army, in which all of them (except the orthodox and the Arabs) serve together.

And of course the one great unifier: War.