The farm is today a mini agri-hub: producing flowers, rice, pulses, oilseeds, fruits, vegetables; and includes aquaculture and poultry too 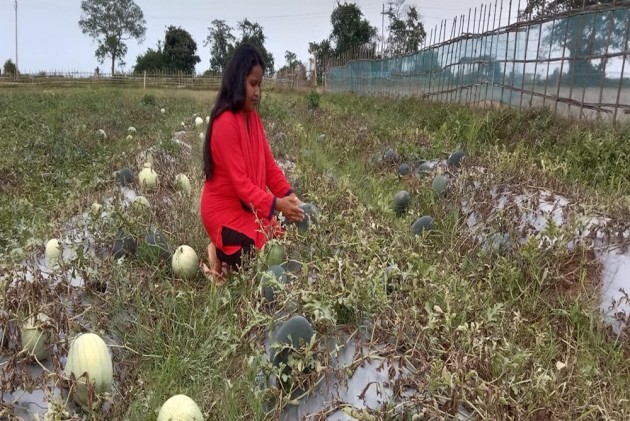 The lush green fields that lay on her way to the hospital always fascinated her. Though trained as an auxiliary nurse, the young Nabanita chose farming as her occupation.

Daughter of the late Ananda Das of Jorhat district in Assam, the enterprising entrepreneur took to organic farming in 2010 and is now an established progressive farmer of repute – owner of ‘Nabanita Organic Farm’.

But her first formal training happened only in 2014. It was through a programme on horticultural crop, organised by the Department of Agriculture, Government of Assam.

Also, with trainings and handholding from District Agriculture Department, Assam, Assam Agricultural University and Krishi Vigyan Kendra, she made significant progress towards becoming a progressive farmer and an agripreneur.

She also has a hatchery for fish (local type and carps) and poultry, where she raises breeds like Silky Chicken, Rainbow Rooster, Bonroja, Kadaknath, Turkey, Guniea fowl; Pigeon (Masokali); duck breeds like the White Pekin, Indian Runner, among other.

She has also introduced vermicompost production and Azolla culture. And in the process, she has utilised every inch of the farmland – including vertical space – as a productive asset.

“Low cost of production, quality produce, with best taste and opportunity to get good premium price – organic production is really economically viable. There has been a good demand in my locality and the nearest town of Jorhat, where buyers from different state and national-level institutions – along with local people – are eager to buy these produces,” says Nabanita.

“In fact, my organic farming and the produce has provided a viable income which encouraged me to quit my government job,” she adds.

She also cultivates and preserves different types of indigenous, scented rice genotypes like Keteki Joha, Kunkuni Joha, Kola Joha, etc. Moreover, she is cultivating black rice which originated in Manipur and is used to make different products of black rice.

For her excellence in the field of agriculture, Nabanita has received awards like ‘Outstanding Contribution in the Field of Agriculture’ by Vice-President of India in 2018 at Assam Agricultural University, Jorhat.

She has also received the ‘Innovative Rice Farmer Award’ from the Indian Council of Agriculture Research, Patna in 2018. And the same year, the ‘Progressive Woman Farmer Award’ in New Delhi on the occasion of Mahila Kisan Diwas.

She is also the recipient of several state awards. In 2019, the government of Assam had sponsored the state’s progressive farmers in a trip to Vietnam to study innovative cultivation practices. Nabanita was among them.

Today, several farmers visit her farm to learn and emulate her achievements.