For decades, now, the West has systematically misread what it perceives as 'Islamic' or 'Islamist' terrorism, and despite the experience -- and one would presume, large volumes of intelligence -- of the post-9/11 age, continues to do so. Thus, on the one hand, the US National Intelligence Estimates, 2007, continued to view al Qaeda as "the most serious threat to the Homeland, as its central leadership continues to plan high-impact plots, while pushing others in extremist communities to mimic its efforts and to supplement its capabilities." Similarly, UK's MI5 speaks of as many as 30 'active plots' in the country, most of which "have links back to al Qaeda in Pakistan."

On the other hand, some analysts have reduced the threat, principally, to what one writer describes as a 'leaderless jihad', a loose-knit networks of terror in the West, inspired by the al Qaeda brand of Islamist extremism, but operating essentially as independent "bunches of guys", with no direct or necessary contact with any central structure of command. (Overtly Pakistan-controlled Islamist terrorism in theatres such as India and Afghanistan seldom receives significant attention in these analyses).

In all this, there is a studied neglect of the realities of the ground, particularly of the fact that Pakistan's Inter Services Intelligence (ISI) -- as an organ of the country's military and political establishment -- has been, and remains, the principal source of the impetus, the infrastructure and the organisational networks of Islamist terrorism across the world. Historically, it is now common knowledge, it was the ISI that created virtually the entire structure of Islamist terrorist groupings behind the global jihad, which has now proliferated in new areas through the agency of various proxies. This includes the al Qaeda, and the entire spectrum of affiliates that continues to operate, with varying degrees of freedom, from Pakistani soil more than six and a half years after 9/11.

At least part of the selective blindness of the West (and, indeed, of much of the world) is because 'al Qaeda' has begun to mean different things to different people and, in much of the commentary, has become shorthand for a wide range of ideologically sympathetic groups located in Pakistan, many of which continue to receive active state support. Of the numerous cases of arrests, conspiracies and terrorist attacks related to Islamist groupings across the world (which I have documented in some detail in The Footprints of Terror), connections that are generally attributed to the 'al Qaeda', have been found, on closer scrutiny, to be more correctly ascribed to a range of other groupings, prominently including Lashkar-e-Toiba, Jaish-e-Muhammad, Harkat-ul-Mujahiddeen, Harkat-ul-Jihad Islami, Sipah-e-Sahaba Pakistan, and various factions of the 'Taliban' -- every one of which was a sarkari (state sponsored) jihadi group in its origins, and most of which (with the exception of the SSP, and, more ambiguously, some of the Taliban factions) continue to receive state patronage in Pakistan.

In the immediate aftermath of Operation Enduring Freedom, when the Afghan infrastructure of Islamist terrorism was uprooted, Indian intelligence sources and various analysts, including this writer, had repeatedly asserted that Osama bin Laden, the al Qaeda leadership and remnants, and the defeated rump of the Taliban, had all been relocated in Pakistan with the active cooperation and collaboration of the ISI and the Pakistan Army. A perfunctory denial by President Pervez Musharraf was immediately and uncritically seized upon by the West as sufficient 'proof' that this was not the case, despite the overwhelming burden of intelligence and evidence -- significant parts of which were actively suppressed by US agencies. When attacks against US Coalition and Afghan Forces, increasingly sourced from Pakistani soil, began to draw blood in Afghanistan, these same denials continued to be blindly accepted, or remained sufficient grounds for the Western political leadership to muddle over the Pakistani role. 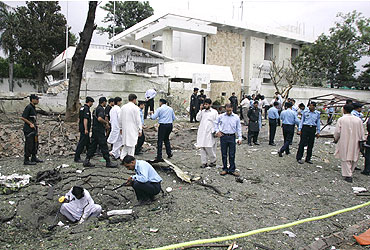 Danish embassy was attacked in Pakistan on June 2.

More recently, these positions have begun to shift subtly -- though their principal thrust remains the same. Western commentators easily concede past Pakistani 'misdemeanours', but are quick to justify their favoured 'allies' in the 'war on terror', on the grounds that the establishment at Islamabad is now, itself, a victim of the same Islamist terrorist groups.

It is, of course, the case that some elements of state-initiated terrorism have now turned against their sponsoring state. But this is natural in any association of violent groupings not explicitly and effectively bound by law and a dominant mechanism of legitimate control. The 'implosion of terrorism' in Pakistan is a fact -- as with revolutions, terrorism consumes its own children and, one may add, progenitors. Pakistan has, par excellence, harnessed terrorism as an instrument of state policy for well over two decades. Today, Pakistan is in the grips of a violent 'blowback', what the Italian magazine Limes has described as Il Boomerang Jihadista.

Nevertheless, the fact that the Pakistan establishment continues to use Islamist extremism and terror as a principal instrument of state policy -- despite the disastrous implosion within the country -- is equally inescapable. This is most visibly the case across Pakistan's Afghan and Kashmir borders -- as well as in the substantial infrastructure of support in Pakistan for the terrorists operating in these theatres -- but is equally true of the far more dispersed incidence of Islamist terrorism in Western countries. Despite the internal turmoil they have contributed to, the Islamist fundamentalist and extremist groupings in Pakistan remain a necessary element of the state's instrumentalities of domestic management and external projection -- giving the country leverage far beyond its natural means, in every concentration of Muslim populations across the world. It is Pakistan, through its state agencies, and loosely controlled radical and jihadi affiliates, that continues to propagate Islamist jihad among the Muslim youth across the world, and that offers opportunities for training and absorption into terrorist organisations headquartered on its soil. The Pakistani establishment's apparent conflict with al Qaeda and elements of the Taliban is, at worst, tactical and transient -- in the long term, there is an identity of undiluted purpose. Were the al Qaeda to be completely destroyed at some (improbable) stage in the foreseeable future, Islamist terrorism would continue to thrive on and from Pakistani soil.

The reality is, there is no such thing as Islamist fundamentalist terrorism. To understand the position correctly, we need to recognize that there is only ISI terror that has been dubbed as 'Islamist terror'. What we have, on the ground, is the proliferation of Pakistani terrorism, strategically compounded across new areas of disorder by networks loosely affiliated with their Pakistani sources. If Pakistani state support to so-called 'Islamist terrorism' ended today, it would not be long before the various terrorist groups atrophied and withered away, lacking safe havens, institutional support and training infrastructure, and the vast ideological resources that have been brought to bear on the so-called global jihad. This does not, of course, mean that no Islamist terrorist incident whatsoever would then be possible. Disaffected 'bunches of guys' may still secure the capacity and will to execute the occasional attack -- but another 9/11 (not to mention the ongoing campaigns in Afghanistan and Kashmir) would need at least as much state support as the last one had.

K.P.S.Gill is former director-general of police, Punjab. He is also Publisher, SAIR and President, Institute for Conflict Management.