Mourn not yet the death of bookshops and literature—a Norwegian writer, now living in Sweden, is a surprising, relieving phenomenon that is sweeping the world. 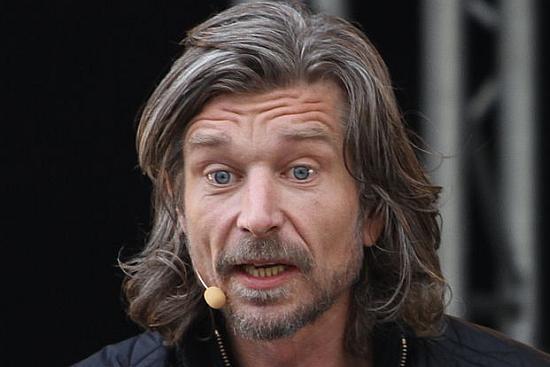 Recently, Karl Ove Knausgaard was doing a question and answer session at McNally Jackson, a popular bookshop in downtown Manhattan. The free event was scheduled to begin at 7PM but by 4PM, the line to get in was already starting to form outside the bookshop. The space quickly filled up and several people were turned away from the event. While many are busy bemoaning the death of bookshops and literature, Knausgaard is a surprising, relieving phenomenon that is sweeping the world.

For the as yet uninitiated, Knausgaard is, in a nutshell, a ruggedly handsome 46-year-old Norwegian writer, now living in Sweden, who has written an epic six-volume autobiographical novel, called My Struggle (in English. The Norwegian title is Min Kamp, which translates to the same as Hitler’s Mein Kampf.), which comes in at over 3,500 pages. The books are called “novels” in Norway but Archipelago Books, the American publisher, removed that word. The founder of the publishing house says, “I feel that ‘the project’ dwells comfortably between (and embraces both) fiction and memoir. (Aren’t they always inextricably entwined?) Why try to define or label the work?”

The books were published in Norwegian between 2009 and 2011 and he quickly became a sensation in his home country. Norway is a country of five million people and more than half a million Knausgaard books have been sold there. The books have been translated into over twenty other languages and since 2012 the first three volumes have been translated and published in English and they have taken the international literary world by storm. Everyone from Zadie Smith to Jeffrey Eugenides to the notoriously hard-to-please critic, James Wood, is devoted.

On the surface, the books are about Knausgaard writing the books. The first volume opens in Stockholm with him writing the first volume. He is tormented by the desire to write something extraordinary but his writer’s block is both mental and actual—his children, a wife, a family, and the demands of daily living. He captures the minutiae of life while also pontificating on the larger questions that loom continuously in his consciousness. He is obsessed with time: with the passing of time, and with death. Book one opens with his meditation on death and its role in modern life. Knausgaard writes:

For the heart, life is simple: it beats for as long as it can. Then it stops. Sooner or later, one day, this pounding action will cease of its own accord, and the blood will begin to run toward the body’s lowest point, where it will collect in a small pool, visible from outside as a dark, soft patch on ever whitening skin, as the temperature sinks, the limbs stiffen and the intestines drain.

James Wood writes in his lengthy essay on Knausgaard for The New Yorker:

You can sense this fear of time in the books. As the volume of the output suggests, he writes at a feverish pace (allegedly sometimes 20 pages a day) that makes the books come alive. It is impossible to put them down. You are reading and living in the literary version of The Truman Show, in which very little is perfect. Again, Wood puts it perfectly: “even when I was bored, I was interested.” The books are a voyeuristic dream come true.

Like many autobiographies, Knausgaard starts at home. He writes about his father, his father’s alcoholism, his mother, his first wife, abandoning his first wife, his second (current) wife. He writes about his children. He writes frankly and honestly and uses real names and places and quickly became the focus of a debate on literary ethics in Norway. Given Norway’s small population, it is often less than a few degrees of separation between readers and some of the “characters” that are written about in rather unkind ways. Knausgaard’s uncle, in particular, has been publicly critical of the work and some of his father’s side of the family has not spoken to him since the publication of the books in Norway. His mother refuses to read past the first two volumes. We’ll have to wait and see what his children have to say in another 15 years or so. About them, in Book One, Knausgaard writes:

“When I look at a beautiful painting I have tears in my eyes, but not when I look at my children. That does not mean I do not love them, because I do, with all my heart, it simply means that the meaning they produce is not sufficient to fulfill a whole life. Not mine, at any rate.”

Other than the voyeuristic pleasure to be derived from these books, there is perhaps the fact that this is not another autobiography about finding hope and happiness. This is not the story of hiking across the country or travelling around the world and finding your true self. This is simply about living a life, with the ups and downs that accompany it, that most of us do. Most of us do not, after all, have dramatic breakdowns from which we rise like phoenixes and then live happily ever after. By writing about himself in such honest detail, he is writing about us all.

He is undoubtedly the literary star of the moment. Many writers are publicly singing his praises. Lorin Stein, the editor of The Paris Review, says Knausgaard has “solved a big problem of the contemporary novel.” Writer Hari Kunzru says, “He risked being boring at every turn. He has the courage to say, ‘My ordinary life as a father in a regional town is going to be enough to hold the reader’s attention.’ ”

Of course success of this level is always accompanied by criticism and backlash. Once something is considered “cool,” it’s only a matter of time before it’s cooler to find it uncool. Critic William Deresiewicz calls the books a “giant selfie.” For The Guardian, John Crace has written a rather tongue-in-cheek satire of the Knausgaardian style that ends (it’s not a spoiler; the piece is only 600 words and hardly relies on the element of surprise):

As I landed in Oslo, my phone rang. My mother had had a serious heart attack. I smiled. Maybe now I'd have something to write about in my next book.

A few other critics and writers have panned the books for being self-indulgent, childish, or just plain boring.

Whether you end up siding with the bouquet throwers or the brick throwers, you cannot deny that we are in the middle of the Year(s) of Knausgaard.