As Delhi moves towards its goal of approximating Singapore, our Left Bank will join the ranks of Delhi's more privileged colonies—gated and aseptic

Moving from the ordered, tree-lined avenues of Khel Gaon to the Jamuna-paar colony of Patparganj was not easy. In part because an address on the wrong side of the river does little to add to status. Back in the early ’90s, Patparganj —the societies not the village—had a small town feel, what my fellow residents described as experiencing the frontier. The Maharajgunj border was next door. And since the capital had still to be gifted its Assembly, civil amenities—power, water and sewerage—were scarce. The area, however, had a charm of its own. True, the constant din of construction, mushrooming shanties, vendors crowding the near invisible roads, rickshaws and cows—most absent in one’s earlier life—were aggravating but the easy availability of daily conveniences, basic street food, weekly haats and maids and presswalas in plenty was a compensation. We, the upwardly mobile middle classes, were pushed into close proximity with the city’s underclass—the urban villagers whose lands had been taken over and developed for our housing, the service providers residing in slums and on pavements, the labouring poor colonising all available spaces in their struggle for survival. To the theory classes— media hacks, TV experts, ‘politically correct’ radicals, many op-ed writers— it was a constant reminder of Indian reality. It forced us to humanise ourselves. We could call ourselves the residents of the Left Bank. 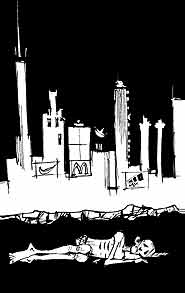 IP Extension is currently experiencing a massive makeover. Our numbers count in a democracy. It helps, of course, that the chief minister’s son is the local MP. But more than that, it is the anticipation of the Commonwealth Games, the proposed Metro extension, not to forget the inauguration of the Akshardham Temple that has pushed up property values in the neighbourhood and attracted capital for upgrading infrastructure. As we get our parks and flyovers, malls and multiplexes, we are ready to join the ranks of the privileged. Our time has come. No longer will we have to describe ourselves as the ‘low infrastructure, high ID’ ghetto.

The sanitising of the neighbourhood has come accompanied by the squeezing out of the underclass. But even as we debate the questionable merits of the demolition drives, episodically smirk at the humiliation of the rich and powerful, valourise the upholding of the law and praise the courts, there is little discussion of the chosen mode of cleansing the city. The breaking down of MG 1 and MG 2 crowds the news, not so the uprooting of the slum and pavement dwellings, many painfully constructed over the years after regular genuflections to the political masters and haftas to the petty officialdom. And since they have been deemed illegal, and numbers count for little with courts, they are also denied compensation or alternative sites.

Soon the IP Extension I moved into all those years ago will be a hazy memory. As Delhi moves towards its goal of approximating Singapore, our Left Bank will join the ranks of Delhi’s more privileged colonies—gated and aseptic. Bereft of support from the op-ed writers, our low-cost services are being squeezed out. And somewhere we are also losing a bit of our soul.