Why is well-known Gandhian activist Anna Hazare on fast? What is the controversy over the Lokpal Bill? 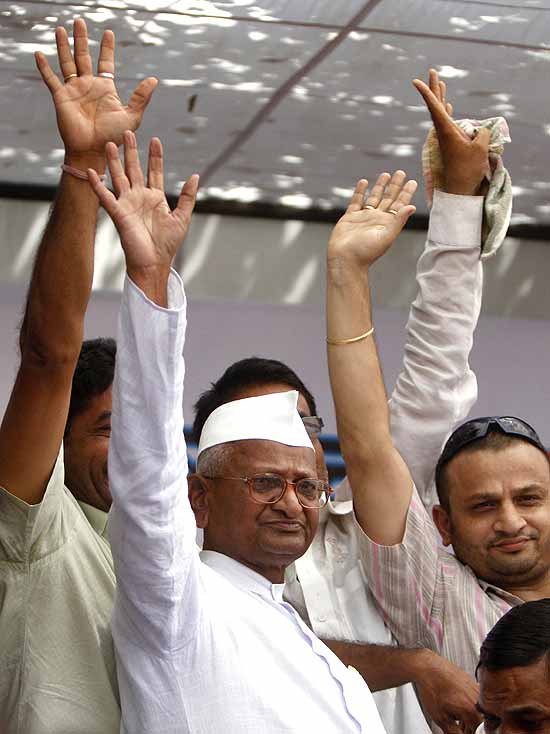 This is a hurried, on-going, incomplete FAQ that we hope to keep updated

Why is well-known Gandhian activist Anna Hazare on a fast-unto-death? What is he demanding?

In Anna Hazare's own words: "I will observe fast-unto-death till the government agrees to form a joint committee comprising 50 per cent officials and the remaining citizens and intellectuals to draft the Jan Lokpal Bill".

He cites his March 10, 2011 letter to the Prime Minister in which he had reiterated this demand and had also made known his intention to go on a fast if the government did not act:

I am continuing with my decision to start my indefinite fast from 5th April, unless the Government demonstrates its genuine intentions to act against corruption by implementing the above steps.

Lokpal, or an ombudsman, essentially means a "representative".

The basic idea of the Lok Pal is borrowed from the office of ombudsman, which has played an effective role in checking corruption and wrong-doing in Scandinavian countries.

The ARC of 1966 while recommending the constitution of Lokpal was convinced that such an institution was required not only for removing the sense of injustice from the minds of adversely affected citizens but also necessary to instill public confidence in the efficiency of administrative machinery.

The original Lokpal Bill was drawn up in 1968 ostensibly to root out corruption in high places and passed in the 4th Lok Sabha in 1969 but it could not be passed in the Rajya Sabha.

However, activists point out that these are quite ineffective as seen recently in the case of Karnataka and want the proposed Jan Lokpal Bill to be introduced in the states as well.

Others point out that countries which have the office of an Ombudsman such as Austria, Burkina Faso, Denmark, Finland, Portugal, Spain, Sweden, the Netherlands, New Zealand and the United Kingdom have benefitted from it.

Why could the Lokpal bills not be passed in Parliament?

In short, because the politicians do not want an independent check over them.

There have been a lot of discussions and objections on whether or not the office of the Prime Minister, ministers, members of Parliament and judges should be accountable to the Lokpal.

There are those who claim that the Lokpal would essentially mean the constitutional scheme would be violated, while others point out that that the ARCs and CRC have suggested ways in which the office of the Lokpal could easily be accomodated within the existening constitutional structure.

Are our present anti-corruption measures really so deficient that we need a separate Lokpal?

The real problem is in independence and autonomy.

At the central level, the anti-corruption mechanisms include the Central Vigilance Commission (CVC), Departmental vigilance and the Central Bureau of Investigation (CBI).

CVC and Departmental Cigilance deal with vigilance (disciplinary proceedings) aspect of a corruption case and CBI deals with criminal aspect of that case.

But CVC is merely an advisory body and its advice to inititate prosecution is rarely, if ever, accepted.

As the recent controversy over the appointment of Mr PV Thomas as CVC demonstrated, despite the SC's intervention, the process remains far from transparent or unbiased.

Besides, the CVC cannot direct CBI to initiate enquiries against any officer of the level of JointSecretary and above on its own.

The CBI of course is reduced to be a handmaiden of the government in power. [Read on here]

Doesn't the UPA have its own version of the Lokpal Bill? What is the problem with that? Why aren't the activists happy with it?

Even Mrs Sonia Gandhi's pet outfit, the National Advisory Council (NAC), is reported to have rejected the government's draft Lokpal Bill. Hear it from the activists of India Against Corruption:

See their critique of the government's Lokpal Bill 2010 here

So do the activists of India Against Corruption have an alternative to suggest?

Yes, the Jan Lokpal Bill. Exactly what Mr Anna Hazare is focussing on via his fast.

Justice Santosh Hegde (former Supreme Court Judge and present Lokayukta of Karnataka), Prashant Bhushan (Supreme Court Lawyer) and Arvind Kejriwal (RTI activist) have together drafted a strong anti-corruption Bill called Jan Lokpal Bill [Now: Version 2.1] which suggests, inter alia, that investigations into any case should be completed within a year and the trial should get over in the next one year so that a corrupt person goes to jail within two years of complaint and his ill gotten wealth is confiscated.

The bill is also supported -- and has also been vetted by -- senior advocate Shanti Bhushan, former Chief Election Commissioner J.M. Lyngdoh, Kiran Bedi, Anna Hazare and others. It was sent to the PM and all the CMs on December 1, 2010.

How is their Jan Lokpal Bill different from the government's bill?

Basically, unlike what its critics charge, the Jan Lokpal Bill is actually not individual-centric and seeks to put in institutional mechanisms to ensure an effective and independent body to take action against corruption.

It is also not claimed to be the last word in tackling corruption. Its drafters remain very flexible and claim to be open to suggestions. Which is why the Bill has progressed and evolved through various versions. The current Version 2.1 incorporates some of the suggestions received from well-meaning critics.

It would have police powers -- to register FIRs, proceed with criminal investigations and launch prosecution. The bill envisages merging parts of the CBI, CVC and and the entire vigilance machinery of government into the institution of Lokpal. India Against Corruption lists as many as 17 reasons why their bill is better.

The drafters claim that their bill has the advantage of keeping corrupt politicians out. But the bill lays much claim in the goodness of individuals and seems to suggest that an impartial jury of eminent people comprising Supreme Court judges and constitutional authorities, through a completely transparent and participatory process, would succeed in electing an incorruptible person. Critics argue that no matter how eminent and well-meaning the appointing panel is, the required checks and balances are missing though the drafters for the present are content to say, "Any complaint against any officer of Lokpal shall be investigated and the officer dismissed within two months".

Do all concerned agree on the Jan Lokpal Bill and its various clauses?

Clearly not, as the above question shows. Even those who are part of the group that helped draft the bill have reservations. They point to their flexibility by maintaining that they are open to all suggestions.

Supporters of the bill also admit to misgivings that some of the provisions in the draft bill could encourage frivolous complaints of corruption and frivolous actions paralysing the process of governance but the activists argue that these issues can all be sorted out by discussion and debate.

Karnataka Lokayukta Justice Santosh Hegde puts it in perspective when he dismisses the government’s Lokpal Bill as being of no use. But, he says: "I am not completely with the Jan Lokpal Bill, too, although it’s much better. I would certainly say that the government should talk to civil society and incorporate their views while the civil society should also participate in any such discussion with an open mind. It has to be a two-way street.”

Eminent lawyer Prashant Bhushan, who was also involved in drafting the Bill, maintains that the National Advisory Council (NAC) could help re-draft the Jan Lokpal Bill. Critics however argue that even the NAC is an unelected body.

At least one of the members of the NAC, Aruna Roy, is already a signatory to a statement praising Hazare for helping create a groundswell of public support for the Jan Lokpal Bill, which goes on to say:

“Bypassing democratic processes for political expediency however desirable the outcome, may be detrimental to democracy itself. Thus our focus is not on ensuring that there is 50% representation for civil society with members of the GoM who are entrusted with drafting the Bill, but to demand that the Government immediately announce its intention to pass a strong Lok Pal legislation based on wide public consultations.”

So is this bill not anti-democratic, non-representative and elitist if it does not even allow any democratically elected representative in an election to participate in drafting it? Is the process it not unconstitutional in as much as it seeks to appropriate the law-making authority?

A much criticised provision of an earlier draft of the bill was about having two latest Magsaysay Award-winning Indians in the Lokpal selection panel, particularly because some of the Magsaysay Award winners, viz. Aruna Roy and Arvind Kejriwal, Kiran Bedi are prominent members of India Against Corruption.

A curious argument has also been put forward by some that this is an indirect way to provide a role to Scandinavian grandees in the Nobel Committee and the Filipino members of the Magsaysay foundation in selecting an all-powerful Indian official. The simple answer to all this from the activists is (a) the Bill has to be passed by both houses of Parliament (b) None of these provisions are sacrosanct and the activists are open to better suggestions, discussions and debate.

The activists point out that the elected representatives in any case would have a role to play when the Bill goes to the Standing Committee and eventually in any case it will have to be passed by both houses of Parliament before of course being finalised by a joint committee which could include elected representatives. Besides, who says that non-elected citizens cannot participate with the legislative or the executive to help draft a bill? Since the bill seeks to prevent corruption and collusion by politicians themselves, many argue that this may actually set a good precedent for inclusive governance if civil society representation could be incorporated at the discussion stage for any new legislation.

What is the government's objection to Anna Hazare's demand?

The government also argues that there is no precedent for a joint committee to make a draft bill but says it is prepared to consider all the suggestions in the Jan Lokpal Bill.

It also offers that the activists could go through its draft clause by clause, and make recommendations which could be discussed after the assembly elections.

The government's main worry seems to be to set a precedent which could be exploited tomorrow by any disrutptive group.

What is the activists' problem with the government proposal?

As rights activist Arvind Kejriwal put it, "We want a joint committee to work as a platform where independent members from the civil society can come up with suggestions on how to go about the Lokpal Bill but the government suggested that we meet the GoM (Group of Ministers), which will create a sub-committee, which will take a decision on our suggestions. This will create conflict of interests because of the presence of many ministers - such as Sharad Pawar and Veerappa Moily, who failed to see a scam in the 2G allocation"

Postscript: The PRS Legislative Research offers a useful historical background on the Bill as well as the recommendations of various commissions on the office of the Lok Pal and also offers a comparison of Lokayukta Acts of some key states

This is a hurried, on-going, incomplete FAQ that we hope to keep updated