The Man Who Set A Ghazal To A Western Jazzy Tune

On S.D. Burman's 108th birthday recalling his magical teaming up and finally splitting with Sahir, and the 'rediscovery' of Geeta Dutt 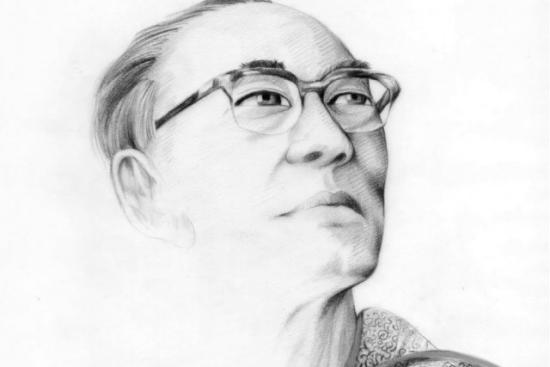 Among the young and passion-filled minds [S.D. Burman] came into contact with was a young poet. Abdul Hayee, new to the city, trying to find his space in the writing world that yet ignored him despite his success at a Progressive Writers’ Conference in 1949, where he had met luminiaries like Ismat Chughtai and Jan Nisar Akhtar. Prem Dhawan, who had befriended him, tried to help him by sending his poems to significant members of the film fraternity.

Writing under the pen name, Sahir Ludhianvi, the poet was exactly what SD was looking for. He was impassioned, he was idealistic, and he was looking for a break. Quick to spot potential, the composer signed him on for the two films he was working on, Naujawan and Baazi.

Sahir’s composition ‘Thandi hawaein’ for Naujawan captured the freshness of young love; it was a gentle breeze that floated on S.D. Burman’s music and, wrapped in Lata’s fresh voice, it swayed the heart of a generation looking for new dreams of love. Both lyricist and composer tasted the sweetness of success with the song.

Yet, with his next film, S.D. Burman was faced with a puzzle.

The scene was the first that would be shot for Baazi. Guru Dutt would direct the film, his very first as a director. The result of an understanding between two out-of-work hopefuls, Baazi starred Dev Anand while his friend Dutt wielded the megaphone.

The scene was a complex one to start a film with for a new director, but Guru Dutt obviously wanted to use his skills as a choreographer, learnt at no less an institution than Uday Shankar’s at Almora, to good use.

It was a delicately balanced scene. A song, shot on the gangster’s moll, who was to seduce the hero. Yet she was obviously half in love with the debonair, dashingly handsome young man, and even as she sang to him to lure him along, she wished to warn him of the dangers lurking around. Sahir jumped into the scene with fervour, he had written a ghazal for this scene. It was S.D. Burman’s turn now!

Burman is given the entire history of the ghazal in brief. A ghazal has a certain metre, a definite structure. And most important, a mood. It is strict in the way it follows all this. A ghazal is a series of couplets, and the couplets always rhyme. And there is a constant refrain that recurs in the second couplet. The mood is romantic, sometimes full of pain. And the song therefore must be also slow and beautiful. Perhaps indicative of pain.

He has taken the lesson and the scene home as it has been described to him. He carries it in his mind, like a precious vessel full of nectar, he dare not let it go, in case he spills the contents, the explanations.

He has tried to find out the storyline and why the girl is singing and to whom.

It is the very first scene to be shot for the film, the muhurat shot. It makes him proud that his song will be part of the muhurat, and filmed on Geeta Bali, who is quite a big star. He mulls over what he has learnt, though he is not sure of the complete veracity of what he has been told. A girl singing to herself, and half to the man she wishes to communicate a message of love to, a man she is in love with. His life could be in danger, he might be killed. And in her heart is sorrow, and love.

He mulls over the song, the tune. Tries various tunes, some make him want to weep, would that be nice, he wonders, making the audience weep for the maiden so hopelessly in love? Or should there be some dread, some vague foreboding, to signify danger, a clash of cymbals perhaps, or the strumming of a sitar?

Na, the sitar would not work, this is a Western setting. Gangsters, he reminds himself, they don’t have sitars and flutes. Think different. Think Western.

He puts the song away.

Over dinner he discusses the song with Meera. Perhaps she would have a suggestion. You can do it, is all Meera says, her mind preoccupied perhaps with matters of the kitchen. I must involve her more in my work, he thinks, and remembers they have songs to sing when they go back to Calcutta. But in this, his Hindi compositions, she has little to say. I must draw her into this part of my work, he tells himself again.

The scene will not leave him. He needs an instrument. Yes, that will make things easy. If it was Western, a guitar would have to be the right instrument. Or a violin.

A violin would have the right pathos.

He thinks it over, but the visual does not work right for him. He decides to discuss it with Dutt the next day. Will a violin work better or a guitar?

Six years later, after creating songs for Pyaasa, songs that still move hearts with the force of their poetry and the beauty of their melodies, the partnership between S.D. Burman and Sahir Ludhianvi would shatter—over a clash of egos.

As coins that jingle together in the same pocket may find their contours erased by friction, so it was with the two men who had strong ideas about themselves, their legacies and their place in the world of music.

S.D. Burman, never one to compromise on his work, given entirely to his music and his own way of life, stood at one end. Sahir, poet, rebel, proud of his ‘metre’ and yet harbouring deep insecurities as poets sometimes do, was sure of his ground and how he stood tall on it.

The feud in Pyaasa broke over which was the more creative field. Poetry or song. Of course S.D. Burman felt it was the song that ruled, that set the pace for the poem, the words only helped articulate the music. Without words, the music would still please, it would move souls as only music could do, even in a film scene. Poetry, on the other hand, often needed the embellishment of music to reach the ear of the common man. Without music, poetry would languish unheard, as something only a connoisseur could enjoy. Using this as an argument perhaps, S.D. Burman had managed to create the precedent of setting a tune first and then handing it over for the lyricist to fill in with words.

But in Pyaasa, Sahir turned the tables on Dada. He had words ready, a chakla, a song, and the metre was set. There would be no change. Dada was forced to set the words to tune, there was no way out.

This must have rankled, as also the fact that he sincerely believed that the tune was more powerful than the word. The last straw was Sahir’s insistence on being paid a rupee more than S.D. Burman. Sahir was a proud man, his name was already ringing in the halls of fame, as one of India’s best. He had as many hits to his credit as any other writer, and his contribution to S.D. Burman’s success was immense. SD refused to bend to the caveat and walked out of the relationship.

But that is much later. Whatever the discussion between Guru Dutt, the director of Baazi, and its music director touched upon, the fact remains that on the day of the recording, the song that was presented had the girl strumming a guitar and singing, not a soulful ditty, but a Western jazzy tune.

Sahir was young, and new. It was his second recording with S.D. Burman. Their first act together for Naujawan had offered a tremendous hit in the Lata song ‘Thandi hawaein’. There was reason to believe they would work well this time too. But when faced with the strange interpretation of his ghazal, Sahir’s angst was unbearable. He did not care that he was still making his mark, that S.D. Burman was a name of some repute. Upset and beside himself, he decided to walk out of the film. His temper would always be his companion, it had always been his undoing. This time too it almost was.

As K.K. Paul reports in the Hindustan Times of 8 March 2012, Sahir’s ninetieth birth anniversary, if Geeta Dutt had not taken him aside and spoken to him, and smoothed his ego and his temper, filmic history might have taken quite a different turn.

Of course, history records that the song, ‘Tadbeer se bigdi hui taqdeer bana le’, went on to become one of the film’s biggest draws. Geeta Bali, in the role of vamp, a gangster’s moll, rolled her eyes with such dexterous, hidden messages in them, and sang the song with such joie de vivre, that audiences would sit through the film till the song came up, and leave soon after!

Though he set the tune as he thought best, pushing the frontier so to say even as he pushed his own knowledge to new limits, S.D. Burman was nervous about the outcome of his composition when it would finally be shown on screen. The story goes that he was so worried that he took off on a holiday out of Bombay to sit quietly fishing through the days and spend his evenings watching the sunset, hoping to avoid any brickbats aimed his way.

It was only when he heard some kids splashing in the waters and actually mouthing the words and humming the tune of ‘Tadbeer se…’ that he folded his fishing pole and wended his way back into the city.

Baazi proved to be a milestone for S.D. Burman. It proved he could turn something upside down and yet make it work wonderfully. In the process of making a ghazal a Western number, he also helped expand the range of Geeta Dutt’s voice. This ‘rediscovery’ of Geeta Dutt would free her from the narrow confines of the sad songs and bhajans that she was being slotted into.

One more offshoot of Baazi was that the director Guru Dutt fell in love with his singer, and they were married two years later, to continue a great creative collaboration that worked despite the turbulence of their married life.