The Many Colours Of Development

The curious case of making Ahmedabad’s Kankaria Lakefront as a tourist destination. 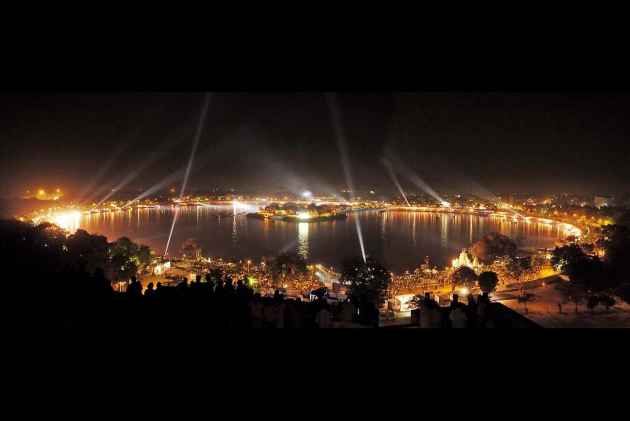 There is an artificial lake in southeast Ahmedabad originally called the Hauj-e-Qutb after Sultan Qutubuddin, grandson of Ahmed Shah, the founder of Ahmedabad, who built it in 1451, but now better known as the Kankaria lake. The hydraulic structures of the Gujarat Sultanate, drawing on pre-Islamic traditions that evolved in response to the region’s natural aridity are justly famous.

Kankaria, for instance, a vast polygon with a circumference of 2.3 km has 34 sides lined with tiers of cut stone steps and approaches flanked by square cupolas each raised on 12 pillars. The elaborate sluice system has buttresses and a channel with perforated stone screens. At the centre of the lake, like a jewel on a ring, is the Bagh-i-Nagina, a garden island where, according to folklore, the Moghul prince Jehangir once dallied with Noorjehan amidst marvels such as ‘a great fish pond’ and an unusual species of palmyra. In 1928, Kankaria was brought under the protective ambit of the Ancient Monuments Preservation Act.

As the city expanded, the lake, once remote, came to be at the heart of the working class district. A gymnasium and a zoo came up in the vicinity. Food vendors and pony riders set up shop. For a hundred years or so the Kankaria lake has been a lively hub, a source of cheap leisure activity attracting a heterogeneous crowd of tourists, and seekers of pleasure and solitude, cutting across socio-economic, caste and religious barriers.

Sometime in the mid-2000s, a promotional effort by the Ahmedabad Municipal Corporation claimed that the lakefront was bedevilled by problems such as dumping by food vendors, pedestrian insecurity and misuse. To solve these problems the Ahmedabad Municipal Corporation (AMC) under the close supervision of Gujarat chief minister Narendra Modi mounted the transformative Kankaria Lakefront Development Project. Beautification projects are all the rage now in Ahmedabad. A pedestrian plaza is coming up around a 15th century citadel. The banks of the Sabarmati river which flows through the city are being developed at a cost of Rs. 1200 crore and by unsettling 10,000 families.

In keeping with the BJP’s prioritization of projects involving water bodies, the promotional material on Kankaria stressed the significance of water in the Hindu mythos. The symbolism and historical perspective of the ruling party are also evident in features such as a statue of the Hindutva ideologue Deendayal Upadhyaya in the park next to the lake and a 30,000 sq ft sandstone mural which aims to depict Gujarat’s heritage ‘since ancient times’.

But Kankaria has also become the site for other imaginations, clear from its description in the AMC literature as a potential ‘international quality urban asset’. The lakefront now covers a larger area with the project having taken over abutting roads and developed the promenade. The changes cut the lake from general view and entry is regulated by a charge of Rs 10 for adults and Rs 5 for children. The charge, prohibitive for daily wage labourers, is not applicable in the mornings when the lakefront is likely to be frequented by walkers from genteel Maninagar, a high profile assembly constituency, next door.

A mini train running around the perimeter, magical fountains, laser shows, a helium tethered balloon and a plethora of upcoming entertainments, separately ticketed, aim to make the spot a hyper entertainment centre but also to showcase the city. Narendra Modi inaugurated the redeveloped Kankaria Lakefront on December 25 (to mark Atal Bihari Vajpayee’s birthday) in the year 2008. The grand ceremony was, in the words of an ecstatic blogger: “like a father giving to his son”. The moment is reprised in a grand carnival on this date every year. The enthusiastic media echoes the rhetoric of ‘world class’ around the project, supplying details such as railway tracks imported from China and the mini train from the UK and so on.

According to news reports, the Architectural Survey of India raised questions about the project but approved it ‘as a special case’. Opposition to the entry fee in the form of Public Interest Litigations (PILs) in the Gujarat High Court were sought to be circumvented by an amendment Bill introduced by the state government in 2010 to allow the state’s corporations to legally charge fees for entry. Authorities tend to dismiss criticism of the project by pointing to the awed reception of the project and the long lines at the ticket counters at Kankaria.

There may be stories of transformative initiatives from other places in the country, and from other times. My reason for telling this one is to question the assumptions that have come to be linked with the term ‘development’ in the run up to the ongoing general elections. Development is not painless: the costs are rendered invisible in a market friendly environment. Development is not value neutral: indeed the imperative to build or refurbish lends itself to a materialization of ideological shifts. Development is not only for the people; political leaders using public space and public funds can appear as benefactors. Our institutions are not strong: not strong enough to stand up for the old or debate the value of the new.

Amrita Shah is with Centre For Contemporary Studies, Indian Institute of Science, Bangalore