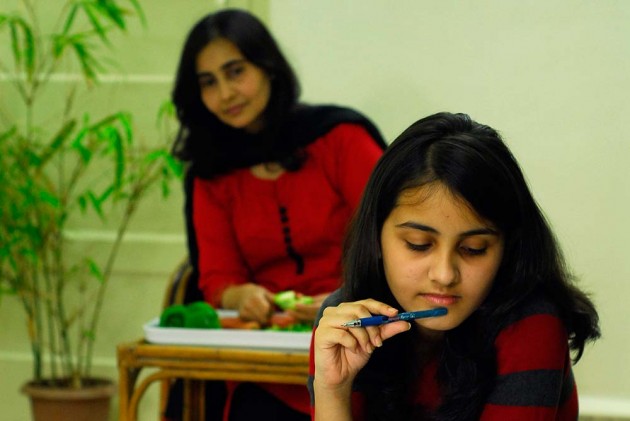 You've seen them. They live in well-heeled neighbourhoods across India's metros, and are marked with focused looks and determined jaws. They are out to make the best of their tiny wards, with unpronounceable ancient Sanskrit or Prakrit names to whom they call out instructions in English.

Meet the new Indian metro mum. Aka the Masala Mummy (MM). She has read up about the Tiger Moms (whom she secretly admires for her hard-nosed focus to make her child shine as a successful adult); she's informed of the American Helicopter mum (what's a iPhone gift to a kid if you can't keep tabs, especially in these dangerous times and wariness of her teen son's best gay pal); and the French mum (she is envious after a read of Pamela Druckerman's Bringing up Bebe, about the effortlessness of French parenting techniques). And there are also those mummies who allow their traditions to rule despite the cloak of modernity.

Smriti Lamech, journalist who writes on parenting on social media platforms says Masala Mummy comes in a shade card. She could be the regular Indian mum, who feeds "home-made ghee ke laddu, sits up with her kids for exams and won't leave them with anyone else for a minute for fear they'll realise they can't exist without her". Then there is the metro MM who thinks "ghee-shee is bullshit, kids needs to be worked hard so that they don't miss her or get into trouble." Enter the support system of maid/driver who ferries them across art, sport, abacus classes. "And then they party hard, like a holiday in the Serengeti". And then "stragglers who don't fit either place".

Says Judy Balan, author, blogger and self-confessed L-Board Parent, her latest book, How to Stop Your Grownup from Making bad Decisions is a result of her interaction with children across many Indian cities. "I think the urban Indian child sounds the same across cities: they have a lot to say about what parents are doing wrong (including their parents' addiction to technology)". She finds the Masala Mummy doesn't fit into the regional stereotypes. "There may be differences between children raised in small town and big cities" but otherwise she doesn't find geographical dispositions with the Masala Mummy's behaviour in contemporary times.

There are other mommy bloggers who find some clichés hold true. The Punjabi mummy finds her child is best, especially her son; south Indian communities and Bengalis place a premium on education and reiterate that their kids must study while they "make the coffee, scratch their back and wait on them"; Sindhi and Gujarati mums are not above instilling a work ethic in their kids early on. However many say in the metros it's hard to distinguish Masala Mummy's regional spice mix in her parenting box.

The Indian Masala Mummy cherry picks her parenting knowledge from the Internet, dives into debates with mommy bloggers and yet when all overseas wisdom halts by her own mother's regional therapies and techniques for parenting. A whack (What the hell? I've turned out alright despite those spankings; Besides, no one noticed, expect my guilty mom conscience, sniff) is par for course. As is obsession with dietary habits (New research says camel milk is efficacious for kids with allergies and should we do that night halt at Pushkar to check it out?). And also schooling. Masala Mummy does not want the cruel ways of schooling she was exposed to but prefers "tender nurturing" (Alternate, nature, holistic, experiential) until the pressures of school final descends when she presses the panic button for numbers and ups the tuition hours.

Author of two books, Yashodhara Lal is mother to three children. She finds Masala Mummy has "a realisation that maybe Mummy doesn't always know best. With technology and exposure and perhaps evolution, it's clear our kids are way ahead of us." And Mummy is racing to keep pace. "As a generation today we seem more conscious about our parenting, more researches but frankly, there's still a lot of uncertainty about whether we're doing it right", she says.

Much many have changed for Masala Mummy but some still hark back to Mother India days. "Self- sacrifice is still a defining characteristic. Which is why the odd girls' night out takes on such guilty overtones", points out Lamech.