Hindu and Hindutva are easily conflated, particularly since a rising Narendra Modi in India’s political discourse has raised the ire of those ideologically averse 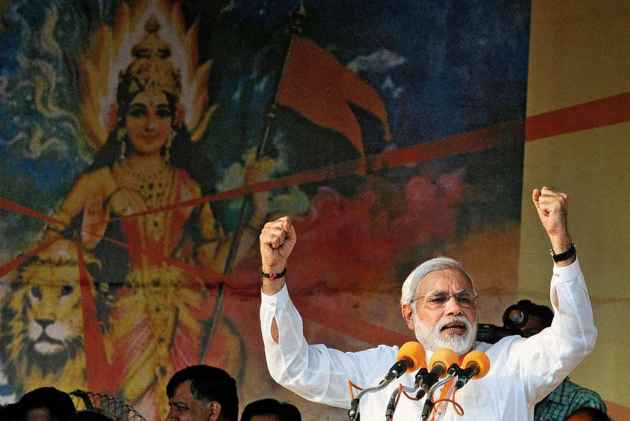 More stories from Suhag A. Shukla
View All

Several years ago, I met with a staff member of U.S. Congressman Keith Ellison’s office on behalf of the Hindu American Foundation (HAF).  The staff member’s name was Zahir Janmohamed. In Their Master’s Voice in Washington, Janmohamed offers a vignette where an HAF delegate abruptly left a meeting with him.  A delegate did indeed leave, but only after Janmohamed began the interview where his then boss, U.S. Congressman Keith Ellison, had left off a year earlier in another face-to-face: “Are you affiliated with Hindu fundamentalists in India?”

Hindutva, Anti-Muslim, Fundamentalist, Chauvinist—these are the tired monikers all too familiar to anyone donning the badge of “Hindu” in the public square.  But it is a tired narrative, tone deaf to conversations that occupy the space between the “liberal secular elite” and “right-wing Hindutva.”  For it is in that middle ground that the vast majority of Hindus throughout the diaspora likely find themselves, grasping at that space as it contracts in an increasingly polarized socio-political landscape.

Janmohamed does well to spotlight advocacy as an acceptable, even necessary complement to a pluralistic America.  After all, whether dealing with the caricaturing of Hinduism in popular media, giving voice to religious minorities in Pakistan, or promoting equality and human dignity regardless of race, religion, sexual orientation or caste, second generation Hindu Americans are entitled to interpret their spiritual heritage in a way that is relevant to their time and place.

But Janmohamed also veers into the neatly stereotyped tale of Hindu intrigue and intolerance. He conjures up a two decade old quote, long refuted, ascribing Hindutva connections to HAF founders and gives voice to those illiberally disposed towards Hindu advocacy and who propose a central irony: that what Hindu Americans seek for Hindus in the U.S. is in contradiction with what they want for minorities in India.  Or as Manu Joseph suggests, “[Hindus] tend to be liberal Democrats in the United States, but political conservatives in India.”

My answer is that beyond the intellectually lazy suggestion that to be pro-Hindu is to reflexively be anti-minority, such assertions not only fail to understand the American mind, but also to distinguish the diametrically different interpretations of secularism and equal protection in the U.S. and India.  The U.S has no Penal Code 295A that pulped Doniger’s book and no National Commission for Minorities as does India, and laws like India’s 377 criminalizing homosexuality have long been overturned.

Indeed the real irony in Hindu advocacy is that even as Hindu Americans join diverse coalitions to oppose government endorsement of religion, such as the state of Texas sponsoring a Ten Commandments monument on public grounds, the very same privileging of separation of religion and state, or secularism, means HAF may protest against India’s “secular” government controlling Hindu temples—but not Muslim or Christian religious institutions.  Or Hindu Americans may criticize separate personal laws that most adversely affect Indian women of all religions. Far from insisting on quotas or separate laws as one may see in India, there has never been a call on the U.S. government by Hindu Americans for special privileges—only an insistence on equal consideration and equal protection under extant law. As to any paradox, Hindu Americans may find themselves on different sides of “minority rights” just to be consistent and contextual to different definitions of secularism.

A rising Narendra Modi in India’s political discourse has raised the ire of those ideologically averse, and Hindu and Hindutva are easily conflated by those so inclined.  That conflation has spilled over into American advocacy vis-à-vis India, and  can be examined  in the context of House Resolution 417 and the pulping of Wendy Doniger’s Hindu project.

House Resolution 417 (H.Res.417) introduced in the current U.S. Congress not only seeks to continue denying Narendra Modi a visa, but calls on the Government of India to empower the National Commission on Minorities to conduct trials and hear appeals.  Constituents of the same coalition that lobbied the State Department in 2005 to deny Narendra Modi’s visa, paid a Washington lobbyist at least $30,000 for just three months of work to push H.Res.417. This coalition, which also includes several organizations led by the founder and past president of the Indian National Overseas Congress, engages various branches of the U.S. government with its campaign against a so-called Hindu supremacy movement in India.

There were really no efforts in the U.S. to oppose the visa denial of Modi in 2005, when investigations were ongoing.  But as Alyssa Ayres of the influential think tank, the Council of Foreign Relations, asserts, the December 26, 2013 decision by a Gujarat Court to uphold the Indian Supreme Court’s SIT report provides “legal clarity,” that evaded before. After U.S. Ambassador Nancy Powell’s personal detente with Modi, the tide has clearly turned, and H.Res. 417’s Modi fixation looks passe’ and potentially damaging if a Prime Minister Modi harbours resentment.

For the U.S. Congress to call on India to empower the National Commission on Minorities with unprecedented powers can only be seen as an audacious, supercilious attack on India’s judiciary. “It is the equivalent of the U.S. government creating an agency made up of everyone but white Christians Americans to monitor and prosecute only white Christian Americans”— we’ve told members of Congress who may have otherwise been duped by the platitudes H.Res. 417 features in its prologue.

HAF unequivocally criticized Wendy Doniger’s wild romp with Hinduism in The Hindus: An Alternative History.  And while HAF was amongst many Hindus who protested against the book possibly winning the National Book Critic’s Circle award (it lost), the Foundation was also amongst those who condemned its banning. But to simplify this issue to one of religious fundamentalism coming to heads with academic freedom obscures the book’s factual, translation, and interpretive errors that not only lay Hindus, but other academics have pointed out.

And clearly oblivious to any contradiction, scholars such as Vijay Prashad who write paeans to Doniger for her “tribute” to Hinduism and vociferously condemn the “Hindu Right” for their extensive critiques of The Hindus, have no qualms in boycotting academic institutions in Israel or that of Narendra Modi to address students at Wharton Business School via Skype.  If the open exchange of ideas is a principle that those committed to a free and open society cherish and enjoy, why is it that these self-appointed saviours of secularism, free speech, and academic freedom only stand up for those with whom they agree?

Indeed there will always be members of a fringe who prefer extreme rhetoric, albeit from the comforts of their screen and mouse, but there are others—conservative, moderate, liberal, and yes, secular Hindus who have chosen to publicly engage Doniger in dialogue, or express opposition to the content of her scholarship and value of her work.  That these voices are finding space in the mainstream media is a testament to perseverance, but there is a road yet to travel.

Much time has passed and work done since my meeting with Janmohamed. We may have major disagreements, but we will also find common ground in a shared upbringing as the children of Indian immigrants.  It is in engagement—such as here on the pages of Outlook—that we will build mutual respect and understanding.

House Resolution 417, Wendy Doniger’s The Hindus: An Alternative History, and even American public school textbooks share one thing in common: they each try to tell the story of India—as she was and as she is—but, as I would argue, with a preference for thorns rather than roses.  Why does this even matter to Hindu Americans, many of whom are not of Indian descent or several generations removed?

The answer can be articulated only in an ephemeral vocabulary: India’s legacy—her pluralistic, ever-relevant spirituality, and the many spiritual masters she has bore.  India is the cradle of Dharmic religious traditions—Hinduism, Buddhism, Jainism and Sikhism—that matters regardless of whether ancestors left India’s shores generations ago, or Dharma touches many of us if only by serendipity. Their master is no man or nation, it is Dharma’s voice that moves them.

Suhag A. Shukla is Executive Director, Legal Counsel and co-founder of the Hindu American Foundation (HAF)